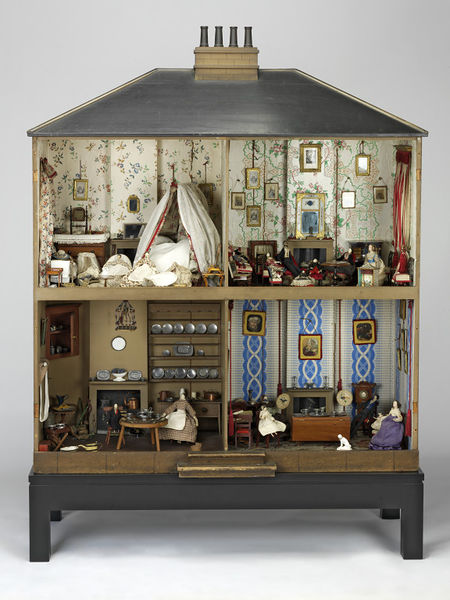 Dolls’ houses have long been at the heart of the displays at the museum in Bethnal Green, and as Small Stories has shown, their appeal never gets old.

This article appeared in The Times on Thursday 23rd August 1928, describing the attractions of the museum for children. Arthur Sabin welcomed children, creating displays especially for them and changing the atmosphere of the museum to make it less intimidating. As a curator now, following in Sabin’s footsteps, what strikes me from this account is the perceived independence of child visitors – coming time and again by themselves to the museum.

DOLLS’ HOUSES IN A MUSEUM

There are about 100,000 children in Bethnal Green, Hoxton, Shoreditch, Limehouse and the neighbouring parts of the riverside, and in holiday time they offer excellent raw material to Mr A K Sabin, the curator of the Bethnal Green Museum. Already many of them have acquired the museum habit: but it need not be supposed that they have “high brow” tastes or an unnatural craving for knowledge. Their favourite exhibits, in this order ranked, are dolls’ houses, models of ships, railway engines and birds.

The collection of dolls houses is a most interesting one and the favourite exhibits can be judged by the number of fingermarks that have to be polished off the glass cases containing them. But the children have a nice sense of the rights of property, and where there is no protecting glass, they are content to look without touching. They come in twos and in groups of little families, the fame of the dolls’ houses having spread among all the little girls of that densely populated area. Fathers and mothers come with a few, but the majority are unaccompanied on weekdays. Sunday is the most crowded day, when young visitors with a knowledge of the exhibits acquired during the week bring their relatives, young and old, to see the treasures. It is excellent propaganda for the museum, which deals with industrial art generally and aims at being of real use to the vast industrial population of all ages in its neighbourhood. During school time, lectures are given to parties of school children, who in this way learn to visit the pleasant and homely museum with its adjoining open spaces and attractive flower beds in the green nearby.

The most popular exhibit is a lovely Georgian dolls’ house – a loan which passed from 1760 to eldest daughter after eldest daughter in a long line of succession. The line of succession having ended, it is now on loan, and is the Mecca of little girls and boys of Bethnal Green. It is a stately mansion with two flights of steps leading to the front door, and is typical of the architecture of its period. It is beautifully furnished, and many of the smaller pieces being set out around it in the showcase, in order that they may easily be seen in detail; lovely silver tea-services, tiny pieces of Worcester, Wedgwood plaques, old glass, miniature dominoes and the like. The drawing room is a handsome painted room with oval miniatures on the wall. The dining room has fine candelabra and rich fittings and the whole house, with its furnishings and domestic offices, its gracious rooms and its well-dressed inhabitants, is a fascinating example of the characteristics of the period.

The Queen was most interested in it when she paid a visit to the museum some time ago, and as a result of her visit she sent furniture for an empty dolls house in the style of the second half of the 18th century, having taken a careful note of the rooms to be furnished. She also lent a model white and gold room designed for one of the palaces, with a notable mantelpiece and handsome portraits. The furniture of this is modern, including a Chesterfield and easy chair and tiny occasional tables, and in sending it the Queen included a careful note as to the positions of the various pieces of furniture. The children who peep into its well-proportioned beauties see it exactly as she arranged it.

Other exhibits include a cosy Victorian house of the 1830 period with amusing details, ‘what-nots’, tiny babies trimmed in lace and ribbons and a generally crowded comfortable fussiness. An early perambulator is shown, and a hipbath for washing the baby.

Another delightful and fussy house of the second half of the Victorian era is much beloved by young vistors; it is an amazing mass of typical furnishings and ornaments, and has a bath with a shower and a studio-attic for the son of the house, reached by a ladder and full of the clutter of a boy’s striving after the arts.

There is a Nuremberg kitchen as a separate exhibit, with a great array of cooking utensils, and there is a model modern cottage with neat rows of cabbages and cauliflowers and rose bushes. A delightful fish-mongers shop has model fish and game and an ample saleswoman in charge, with straw fish carriers for taking home purchases.

There are many worse places in which to spend an idle day than this museum. The kindly curator knows his pupils, both big and little, and the constant clicking of the turnstile is the measure of his success.