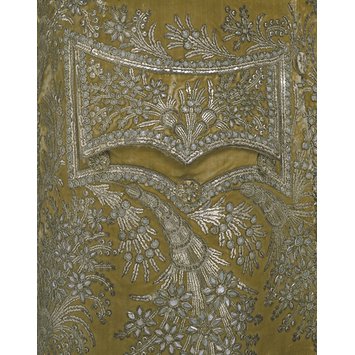 Tabitha Baker is a Collaborative Doctoral Partnership PhD student at the University of Warwick and the V&A, supervised jointly by Professor Lesley Miller and Professor Giorgio Riello. Her project is entitled “The Embroidery Trade in Eighteenth-Century France” and  she is investigating the skills, products and networks of the French embroiderers in eighteenth-century Paris and Lyon. In December 2015 she took part in the Joubert workshop and she is interested in how the works of Joubert and Saint-Aubin inform and are informed by their respective trades.

Given the current project of translating Joubert de l’Hiberderie’s manual on designing silk for a modern English audience, it is useful to take a look at an embroidery manual written around the same period in 1770 by Charles Germain de Saint-Aubin, designer to King Louis XV. This is because the two texts are highly comparable, both being products of textile trades in the luxury industry which required a great deal of skill, time and cost in the production process.

L’Art du Brodeur (The Art of Embroidery) contains a wealth of information on the history of embroidery and the technical aspects of the embroidery process, bearing similar hallmarks to Joubert’s manual and coming from a related trade of the textile industry. L’Art du Brodeur was translated in 1983 by Nikki Scheuer, a project which was commissioned by Los Angeles County Museum of Art and which presents similar translation difficulties to that of Le Dessinateur, such as the highly technical language used by both authors. This can give us some ideas of how to tackle such a translation project which I will explain in this blog entry.

During the eighteenth century, embroidery in France was a fashionable yet expensive form of decorating garments, furniture and church vestments. The sumptuous designs (many of which can be found in the V&A collections today) often incorporated elaborate floral designs or pictorial scenes, and used luxurious materials such as silk, gold, silver, chenille and spangles. Clothes such as men’s waistcoats and women’s dresses were embroidered by hand by professional embroiderers and could be found in the wardrobes of the most affluent in society such as aristocrats and the nobility.

Working with such ornate designs and expensive materials, embroidery was therefore a highly-skilled profession in the textile industry, and one which Saint-Aubin deemed worthy of writing a complete treatise. Beginning with a brief history of embroidery across the world, as well as a summary of the embroiderers’ guild in Paris, Saint-Aubin guides us through the intricacies of every step of the embroidery process. We are first told how to prepare for embroidery, starting with the design and how to mark out the pattern onto the fabric using pinpricks and a pounce bag, and how to set up the frame.

Next, Saint-Aubin dedicates a separate section of text to each method of embroidery such as embroidering in gold, ‘paillettes’ (or sequins as we would now call them), and even in fur. In each section Saint-Aubin comments on which each method is suited to, which materials would have been used, and who would have performed such tasks (for example he comments that the method of ‘la broderie en taipisserie (needlework on canvas)’ was not considered worthy of a professional embroiderer). The work ends with illustrated engravings relating to each technique that Saint-Aubin has explained, as well as a useful glossary.

The difficulties of translating texts such as those of Joubert and Saint-Aubin lie mainly in the technical language and the fact that the meanings of certain technical terms have changed over the centuries. For example, the term ‘guipure’ means something very different now to what it did in the eighteenth century. Saint-Aubin was also writing for a very different audience in the 1700s, and his detailed descriptions of the embroidery process suggests he imagined a reader who was technologically knowledgeable and had a sound understanding of the commercial context of eighteenth-century France. The translation of L’Art du brodeur helps the modern reader to not only grasp the technical terminology through its use of parenthesis within the text, but also through the annotated footnotes which provide contextually relevant information, such as an indication of eighteenth-century prices and earnings.

Another way in which Scheuer’s translation has helped our understanding of L’Art du brodeur, is to restructure the work so that the illustrations from Saint-Aubin’s engravings are interspersed throughout the translated text and appear alongside the corresponding text, rather than appearing at the end as in Saint-Aubin’s original work. This is helpful to the modern reader of the manual who is immediately able to make a connection between the illustration and the description which are now located on the same page; in Saint-Aubin’s original text, the illustrations and plates are located after the entirety of the text. Not only does this improve the readability of the text, but it also contributes to the modern reader’s understanding of the highly technical aspects of embroidery to which Saint-Aubin is referring.

The annotations also add a further dimension to the translated text in that they allow the modern reader to cast a critical eye over Saint-Aubin’s words and understand more fully the context in which he was writing. Where appropriate, the editors offer alternative interpretations to what Saint-Aubin would have been describing, or remind us of a particular fact. For example, in his introduction, Saint-Aubin attributes the first use of gold to decorate fabric to a certain king; however, the editor’s annotation reminds us that there were three kings with the same name who ruled during this period!

Together with the editor’s annotations which explain in more detail the technicalities of material and techniques, the translated text makes L’Art du brodeur accessible to a modern and layman audience. For the 250th anniversary of the publication of Le Dessinateur d’étoffes d’or, d’argent, et de soie, we can draw inspiration from the translation of Saint-Aubin’s treatise to bring Joubert and his work into the 21st century.

I found your blog very interesting especially as I’m researching a 19th century jacquette which was fashioned from an embroidered male 18th century court coat (French) I would be very grateful if I could show you some images of the embroidery embellishing the jacquette. My knowledge of 18th century embroidery is limited. I am familiar with the text of St Aubain but would be so interested in having a conversation with you. Best wishes Matilda Aspinall phd candidate

Hi Matilda, your project sounds fascinating. It would be really interesting to see the pictures of the embroidery on the jacquette you mentioned. My contact details are on my webpage if you would like to get in touch: http://www.warwick.ac.uk/tabithabaker

Thank you for a great explanation. I was looking online for a similar idea and really appreciate it
Cheap Digitizing Services