Explore the glorious variety of Romanesque and Early Gothic art including gilded enamels from the Meuse valley, glittering mosaics in Norman Sicily, and the soaring vaults of Chartres Cathedral. This twelve-week online course covers the period between 1050 and 1250, inspired by the V&A's abundant medieval collections.

Scroll down to find out more information about this course.

V&A Academy Online art history courses bring you all the richness and rigour of the V&A through an easy-to-use platform built with the latest Microsoft technology.

Learn wherever, whenever. With V&A Academy Online, you can log in to view lectures live and pose your questions in the Q&A, or view the recording later in your own time. Download lecture notes, copies of the slides, and additional study materials from our secure learning environment. Then join the conversation: share your perspective with your fellow students, and support each other in your further enquiries outside of class time.

To find out more, including about how we use your personal data, click on "How do our online courses work?" 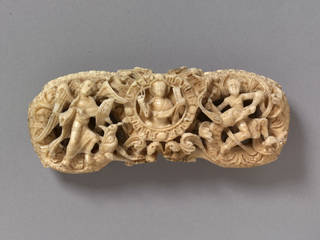 Dr Sally Dormer is a specialist medieval art historian and lecturer, with an M.A. in Medieval Art History and a Ph.D. on Medieval manuscript illumination from the Courtauld Institute, University of London. Sally teaches, or has taught, for the Art Fund, the Arts Society, Art Pursuits, Cox & Kings, Swan Hellenic and Gresham College.

I feel very privileged to benefit from such first rate scholarship. Whilst physically more constrained than usual, my mind has been let free to explore another age. Time travel made easy! Online Student, December 2020

The century between 1050 and 1150 witnessed unprecedented investment in Romanesque church buildings, many inspired by aspects of surviving Roman monuments, and the rebirth of architectural sculpture with plenty of regional variation across Europe.
Western Europe’s mood changed, when the “New” style of architecture (termed “Gothic” from the 17th century), emerged in mid-12th century Paris. Craftsmen de-materialized Romanesque massiness and constructed buildings that reached new heights with increasingly light-filled interiors. Experimental Gothic buildings were built in the Ile de France, followed by High Gothic cathedrals in Chartres and Bourges. Paris was the epicentre of new developments, subsequently adopted, often with native embellishments, by neighbouring realms. Figurative art changed profoundly, moving from dynamic design, characteristic of the Romanesque, to something more natural, and even classical. This revolution was prompted by seismic shifts in theological philosophy, vibrant urban and commercial growth, increasing literacy in society’s upper levels, and monasticism’s decline, although, from the 1220s, the new mendicant orders were influential. 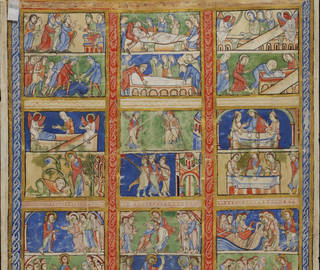 V&A Academy Online courses are built with the latest Microsoft software. Tune in to expert lectures live, or catch up later on demand. Download handouts and presentations. Join the discussion in a secure, closed class environment, wherever you are.