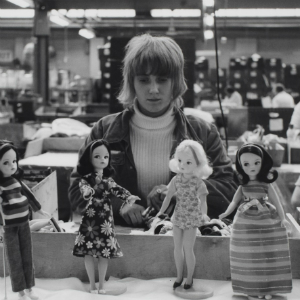 Between 2008 and 2013 the V&A Museum of Childhood undertook a major project to document the history of British toy making. The British Toy Making project, funded by the Heritage Lottery Fund and the Esmee Fairbairn Foundation, focused on the archives of four major twentieth century British toy manufacturers Lines Bros. Ltd, Mettoy, Palitoy and Paul and Marjorie Abbatt Ltd.

Toy making is an international industry and Britain was at the forefront of toy design and production for much of the twentieth century. The British Toy Making project has opened access to archive material at the Museum and collected new oral histories from individuals who worked in the industry.

The Museum holds a range of archive material relating to a wide variety of toy manufacturers and distributors. During the project, these were catalogued, conserved and digitised and, together with the Museum’s object collection, provide a fascinating record of British toy making.

Paper archives can only reveal part of the history of British toy making. To supplement the archive collections, Museum staff collected oral history interviews from a wide range of individuals involved behind the scenes in the industry. These interviews have been transcribed and are available to read.
Read the transcripts

As the project developed and further contacts were found, smaller archive collections relating to the British toy making industry were also donated and catalogued. These can be accessed by appointment.
Read more

Research undertaken and material unearthed during the British Toy Making project formed the starting point for the War Games exhibition. This exhibition focused on the close relationship that has existed for centuries between war and conflict, and children’s toys and play.

BA (Honours) Applied Arts students from Middlesex University made use of the Museum’s archive material during their involvement in the Use Your Imagination exhibition. They considered the vitally important nature of play in children’s social, emotional, physical and intellectual development and, in an age of commercially hyped, over-packaged products with short lived appeal, were asked to create a design solution to the question of what makes a ‘good’ toy. As well as using the archive for initial research, the students also worked with Key Stage 1 and 2 primary school children from local schools Christchurch and Hague, who rigorously tested and provided feedback on their designs from concept drawings through to prototype. The finished designs were shown in the Museum’s Front Room Gallery, alongside work by pupils from Christchurch and Swanlea Schools who worked with artists to unleash their imagination and explore the versatility of the cardboard box as a plaything.

A learning resource has been developed for use from KS3 to KS5. Designing the Message is a flexible resource which is particularly appropriate for students of design, media studies, history or english. It looks into the design and presentation of advertisements, considering the various influences on design choices such as the target market and societal trends.

The project led to the Museum being involved in a range of exciting events to promote access to the archive material.

In 2011 and 2012, in conjunction with the British Toy and Hobby Association (BTHA), Museum staff took part in the Makers’ Day seminar held at Toy Fair, Olympia. This was an opportunity for design students and other prospective toy designers from across the UK to receive creative and business advice from invited speakers. The Museum of Childhood’s presentations focussed on what the archive can teach us about the history of toy design and aimed to show students the value of historical archival material (both that held at the Museum and more generally) for their research and contemporary practice. Other speakers included toy designers and intellectual property rights lawyers, who provided a valuable insight into working in the industry.

On 10 November 2012 the Museum held an informal Study Day focusing on the Action Man material in the collections. The day provided an opportunity to see at close quarters some of the prototype material relating to the Action Man range in the extensive Palitoy archive. There was also a witness seminar and Q&A session with some of the designers who worked on the range.