Lego was invented in Denmark by the carpenter Ole Kirk Christiansen who started making wooden toys in 1932. By 1934 Christiansen was using the name Lego, derived from the Danish phrase ‘leg godt’, meaning ‘play well’.

In 1949, the company produced its famous interlocking ‘Automatic Binding Brick’, which, in 1953 was renamed the ‘Lego Brick’. The following year the trade name of Lego was registered. The concept of the interlocking brick was not a new one. A wooden example had been in existence in the 19th century, followed by Minibrix’s 1930s rubber version. Kiddicraft’s interlocking bricks, designed by Hilary Page in the late 1930s, are generally considered to be the main inspiration for the Lego brick. 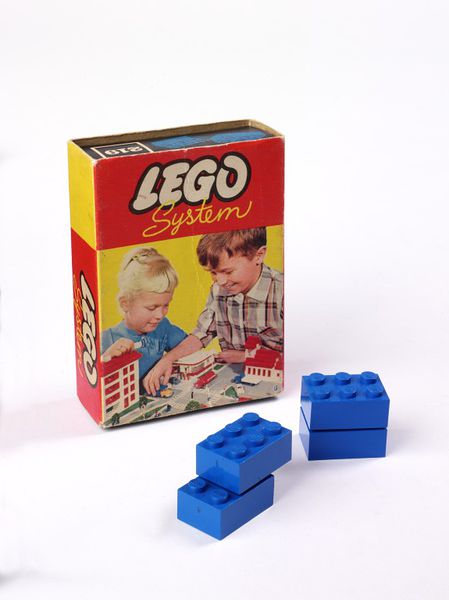 There were three main reasons as to why Lego was such a phenomenal success. Firstly, as with Kiddicraft in England, Lego saw the potential in manufacturing the bricks using plastic, as opposed to wood or metal. Secondly, Lego invented the stud and tube coupling system, patented in 1958, which made its structures more stable, and thirdly, Lego offered a comprehensive system of play whereby any piece could be attached to any other piece, regardless of when it was made.

Duplo, a larger version of the original Lego blocks, was introduced in 1969 for pre-school children, and in 1977 Lego Technic was launched for the more technically-minded child. From the 1960s Lego added a series of pre-designed model sets to its range, complete with photographic diagrams and building instructions which, while veering away from the original philosophy of open-ended block play, offered children new opportunities to develop their construction skills.

Lego has been awarded Toy of the Year three times and was named Toy of the Century by the Toy Retailers Association in 2000. In 2004 a survey by the Museum found Lego to be the most popular toy of the last 100 years. Lego has continued to develop its product to reflect changing trends, and is today regarded as one of the most popular and versatile construction toys in the world, producing merchandise for hugely popular series such as Harry Potter, Lord of the Rings and Toy Story.