Made by the Premo Rubber Company from 1935-1976, Minibrix construction sets enabled children to build their own miniature houses.

As with the later and more famous construction toy Lego, Minibrix consisted primarily of interlocking bricks with moulded studs on the surface. Standard bricks were produced in brown and white, and multi-coloured sets were also available, featuring bricks in pink, yellow, blue and green. The roofs, which were usually green, were made from cardboard, and the windows were made from celluloid. From 1936, the sets came complete with a base on which to build, also made of rubber. Eight different sets were available initially, numbered 0 to 7. In 1937, Tudor Minibrix were introduced featuring a range of different building elements, including individual tiles. 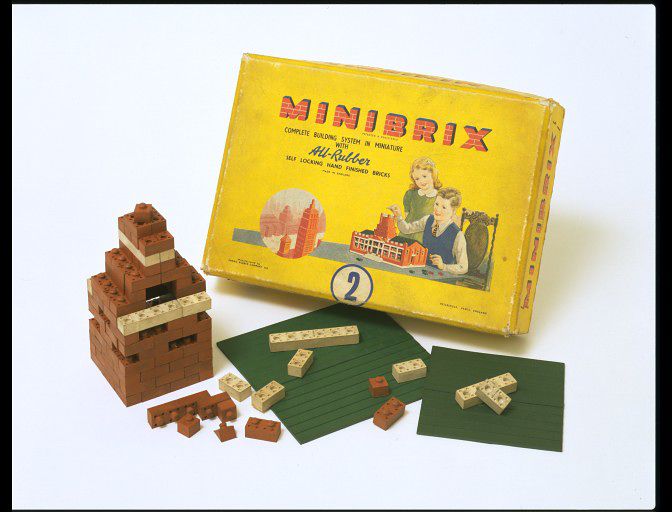 Children who purchased a Minibrix set could also join the Minibuilders Club. Although membership to the club was free, the badge cost seven old pence or twenty-five cents. Members received a regular Minibuilders Bulletin and were encouraged to send in new designs and plans for publication, for which, if printed, they were paid five shillings.

The failure of Minibrix can be attributed to several factors. Firstly Premo, along with many other British toy manufacturers of the period, suffered from complacency and a reluctance to develop and modernise its product, and was eventually unable to compete with the influx of toys from the Far East and the USA. Another reason for Minibrix’s demise was that it was made of rubber, which was heavier and smellier than plastic and tended to harden and shrink over a period of time.

Premo finally stopped making Minibrix in 1976. A housing estate now sits on the former site of the factory in Petersfield, Hampshire.