Museum number: MISC.1-1982
Currently on display in the Creativity Gallery

This house was made in the early 1800s, probably by a carpenter. In 1965 Mrs Winifred Alice Hibberd bought it from a shop in London for £60. She spent 14 years restoring and furnishing it. She noted in her diary that it ‘had originally been made for a family living in a house in Regents Park Terraces’.

Mrs Hibberd repaired and furnished the house herself, between 1965 and 1979, and kept a detailed record of where the items had come from and all the work she carried out. The furnishings came from various countries including America, Spain, France and Scotland, and were bought from craft and antique fairs and shops in London. She also wrote an introductory guide to the house.

The only room that she did not manage to finish was the attic room, which was later completed by her son Dominic. Mrs Hibberd’s family were residents of London Borough of Tower Hamlets as long ago as the 18th century and this was one of the reasons for the family’s decision to donate it to the Museum in 1981. 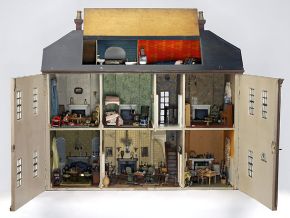 The Dining Room
The Spanish basket in the window contains a bunch of fruit which is actually a single earring bought in Chelsea. The chandelier comes from Spain, the filigree coffee set from Greece, the clock from Illinois, USA, and the pewter plate from Williamsburg, Virginia, USA. The glass birds in the niches are an exceptionally delicate design. The two pictures are framed in old shoe buckles.

The Drawing Room
The drawing room contains one of several carpets made for the house by Mrs Hibberd’s mother. The two console tables are made of gilded balsa wood, with ‘marble’ tops cut from a plastic floor tile; they carry two vases which, according to the Hibberd family, once belonged to the Princess Royal. The tiny opera glasses reveal views of a Big Wheel and the Menai Bridge in Wales. The other article on these tables is a case containing the oldest object in the house – a blue faience bead (about 1350 BC), from the ruins of Amarna in Egypt.

Above the two tables, framed drawings by Francis Streeten show his house at Tunbridge Wells (16 Grove End) and, on the right Chinthurst Hill Lodge, near Guildford, where the Hibberds lived from 1955 to 1965. On the chimney piece there are two Victorian glass domes covering a bead flower; two brass bowls with lids, made as apprentice pieces in an old brass foundry; and a disc of Blue John, the stone found at Castleton, Derbyshire.

The book case holds 26 miniature books and a tall display cabinet contains 29 tiny ornaments, including a set of painted animals, a bone coffee service, a black hair basket woven by Navajo Indians, and a brass book containing photographs of the Victorian Royal Family. Someone has left an embroidery frame on one of the chairs and there is some knitting on the couch. The work table’s contents include skeins of silk, reels of cotton, a tape measure and a purple pin cushion.

The Kitchen
The Kitchen contains objects from many places. The tins and jars on the shelves are from Seville in Spain, the smaller of the two full baskets from Mexico City, the colonial-style salt box on the wall above the sink from Boston in the USA and the glass bottle from Chartres, France. But the best things were made by Mrs Hibberd herself, including the ladder-back chairs, the table with its opening drawer and the 1967 calendar.

The Chinese Bedroom
Upstairs, the Chinese bedroom is decorated with wallpaper and some pieces of Chinese embroidery. The embroidery and the lacquer furniture came from Singapore in about 1920. One large chest has been up-ended to form a wardrobe, containing dresses, coat-hangers and, hidden in the drawer, a blue kimono. The pictures are Indian, three of them painted on ivory and two on glass. There are some fine Chinese figures on the chimneypiece. The bedside lamp and the two red jars are made from old beads. The bed is complete with hemmed sheets and blankets; there is a pair of slippers beside it and a silk night-dress in the chest of drawers.

The Pink Bedroom
Apart from the ivory stool (actually a knife rest) and the old tin wash stand, all the furniture in the pink bedroom was made by Mrs Hibberd. The four-poster is covered with a silk quilt. The fire screen is a framed composition of shells and seaweed. The cruciform picture comes from Assisi in Italy; and there is what looks like a bible on the table.

The Landing
The easel and two pictures on the landing were made by Mrs Kemp Holland between 1979-80.

The Nursery
The nursery contains a painted table, chairs and a tea set from Seville. Several items go back to Mrs Hibberd’s childhood. Her son remembers many of the objects from his younger days, including the glass figures which he once used to make a mobile. The Noah’s ark is modelled on a family possession (its animals came out of crackers). The two scrapbooks are made up from fragments of greetings cards. There is a toffee apple from Texas in the USA on the table and a baby’s coral (a Victorian ancestor of the teething ring) on the floor. Nanny has left her work basket on the rocking chair (the caning of this chair is particularly skilful); it contains tiny cards of buttons and mending wool, and some knitting. The painted rocking horse was made by Miss Barbara Nattriss, Mrs Hibberd’s first cousin, and the pottery rocking horse comes from the Gladstone Museum, Stoke-on-Trent. The ship-in-the-bottle is from the House of the Seven Gables, Salem, Massachusetts in the USA.

The Attic
The attic in the hipped roof was originally a storage space. Mrs Hibberd divided it into three compartments, one containing her inventory of the house’s contents. The bathroom is fitted with a bath bought in Ashbourne, Derbyshire, and a basin bought in Evanston, Illinois. There are toothbrushes and toothpaste on the ‘glass’ shelves. The chest of drawers came from Hong Kong in the 1920s; it contains some exquisite needlework – embroidered tablecloths, towels, pillowcases, a lace-edged sheet and a flower-embroidered bedspread. The two shells are from Key West, Florida, USA.

Mrs Hibberd always called the attic room ‘the teenage bedroom’ but she never quite completed it. She made the curved sofa, with its embroidered cushions, and the shelves, but the carpet was designed and made in 1980 by Violet Deale and the round coffee table was commissioned from Dave Regester, a professional wood-turner from Bickleigh Mill in Devon. The green desk in the far corner is unfurnished. The room contains a piano, guitar and accordion, and also has a fruit machine (from Las Vegas) and a superbly made Scrabble set (in the red box). The two red books are miniature copies of part of the Koran, from a bazaar in Cairo. The brass bottle and goblets are from Hamburg in Germany, the brass lamp from Lourdes in France, and the clay vase from Israel.