Museum number: W.13-1949
Currently on display in the Home Gallery

Denton Welch (1915 – 1948) was a young writer and artist who lived in Kent during the Second World War. After a road accident in 1935, Denton was left with severe spinal injuries. But he was a prolific writer, publishing several novels and keeping a daily journal full of wit and adventures in antique shops and crumbling stately homes.

His charming 18th century dolls house was bequeathed to the Museum, along with a small number of silver miniatures.

It is a well-proportioned, symmetrical Georgian dolls house arranged over two floors, in classic 18th century style. Downstairs the drawing room is on the left, painted pale dove-grey, and the kitchen is on the right. There are two bedrooms upstairs.

At the moment there is no furniture in Denton’s dolls’ house, so there is nothing to distract from the structure of the house and the fine carved details on the fireplaces and doors. 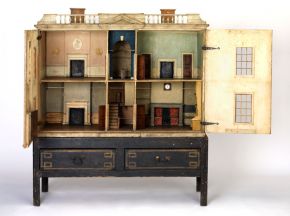 Denton loved the architectural features of the house. He wrote of the bedroom, “there are two perfect little cupboards each side of the fireplace, and the doors are mahogany in white surrounds, an arrangement I always love. The stair-rail is almost entirely gone, but I feel sure that it was a Chinese Chippendale fret and I’m slowly but surely designing and remaking it.”

Denton was given the dolls’ house by his friend Mildred Bosanquet. It had been in her family for generations, but by 1941 it was in very bad shape and was cluttering up her basement, which was needed as a bomb shelter. Denton offered sanctuary to the neglected toy house, and soon started to renovate it.

Restoring the dolls’ house was a labour of love for Denton. At the time, his own living arrangements weren’t ideal, and Denton and his partner Eric spent a lot of time travelling the countryside looking for a home of their own. The dolls’ house may have stood in for the beautiful Georgian manor house that Denton dreamed of living in.

Though he sometimes wondered whether it would ever get finished, working on the dolls’ house became a form of relaxation, a break from the more serious work of painting and writing. On Victory Day, in May 1945, Denton took the dolls’ house into the garden to work on it, and made his most exciting discovery. 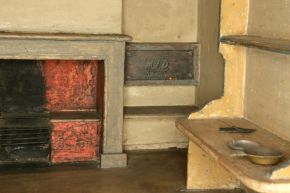 Scraping a block of wood to the right of the open range in the kitchen, he slowly revealed the initials M.J.D., and the date 1783, wonderfully preserved under the coats of paint.

This discovery confirmed the date of the dolls’ house, and linked Denton back to the original owner.

We have been able to trace a probable character. Mildred Bosanquet’s great-grandmother, Mary Dawson, was born in 1779 in Liverpool. She would have been four years old in 1783, when the house was made.

Mary’s father Pudsey Dawson (1752-1816) was a wealthy merchant, who went on to be the mayor of Liverpool in 1799-1800. He also established a school for blind children in the city. In 1809, Mary married Anthony Littledale and they lived in Boston Hall, Lancashire. Though he died ten years after they married, Mary and Anthony had five children. Mary may have bought her childhood dolls’ house from her Liverpool home for them to play with.

Her eldest son Henry Anthony Littledale (1810-1859) moved with his family into Boston Hall, where Mary stayed until her death in 1855. She was buried at Bolton by Bowland. Henry had eight children, and the dolls’ house passed to the youngest daughter Beatrice (1859-1930), the mother of Mildred Bosanquet (1890-1972).

Dolls houses are perfect repositories for stories, and this one is all the more special for its associations with a talented and kind young man who brought it back to life before his own life was cut tragically short.