The Museum’s Creativity Gallery is divided into four sections – Imagine, Be Inspired, Explore and Make it Happen. These are based around four key stages in the creative process: Imagination; inspiration; exploration; and the final result. 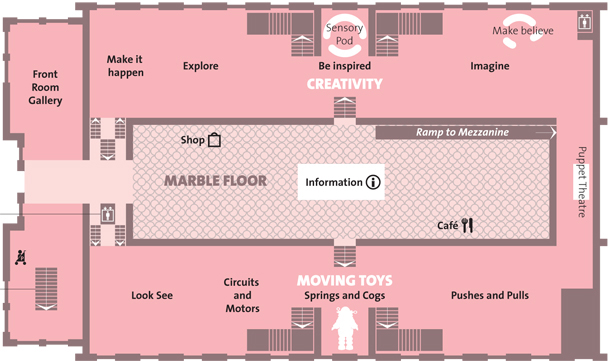 There are many interactives for children to engage with in the Creativity Gallery, including the Sensory Pod and Build it Up and Knock it Down (building blocks). Art Smarts (arts & crafts) also take place every day from 14.00-16.00. 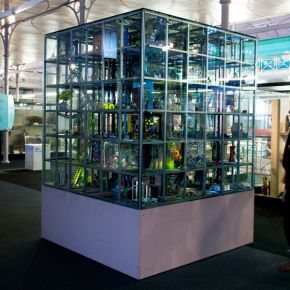 Imagine looks at how a child’s imagination can be stimulated by their immediate surroundings, allowing them to create their own worlds, using anything from a wooden spoon to a cardboard box.

There are hundreds of objects on display in Imagine, including puppets and toy theatres, teddy bears and soft toys, playsets and playhouses, toys based on household objects, dolls, made from wax, plastic and wood, teenage dolls such as Barbie, Sindy and Tressy, fancy dress costumes, board games, plastic model kits and more.

Be Inspired explores the many different ways in which children can be inspired – by their immediate surroundings, the outside world or fantastical worlds. This part of the gallery also shows how artists can in turn be inspired by the child’s creative process.

Many of the objects on display in Be Inspired come from all around the world including rock gardens from China, a model Japanese palace, Russian nesting dolls, a Native American rag doll and more. There are a wide variety of dolls, teddy bears and soft toys and toys inspired by space, including Star Wars playsets and Doctor Who action figures. There are also many examples of toys based on films and TV programmes, includng a Sooty hand puppet, Batman, Superman, Spider-Man and Wonder Woman action figures, examples of rare Marvel comics including X-Men and Green Lantern, and toys based on classic fantasy, including puppets from A Midsummer Night’s Dream, Alice in Wonderland lantern slides and merchandise from the Lord of the Rings film trilogy. 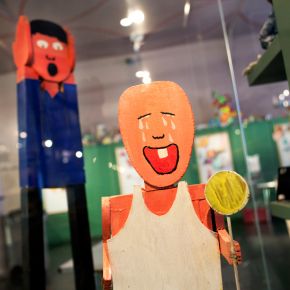 Explore shows how children put their ideas into practice by trying and testing as part of the creative process. This could include learning how to play a musical instrument, writing a story or constructing a tower using building blocks.

Objects on display in Explore include many different examples of educational toys designed to develop mental and physical skills, including musical instruments, chemistry sets, writing sets, needlework kits and cookery playsets. Examples of toy designs and prototypes are on show, as well as toys made from many different materials, including wax, wood, plastic, tin, celluloid and bisque. There are also many examples of construction toys, including wooden building blocks, Super Octons, Lego, Meccano and Stickle Bricks.

Make it Happen looks at the results of the creative process, in particular examples of many homemade objects (including toys, paintings and drawings) made by children.

Make it Happen is divided into three areas: Made by You, a changing display, which showcases examples of objects created by children, teenagers and adults inspired by the Museum’s collections and programmes; Made by Children, which includes a wide variety of objects made by children through the ages, including samplers dating from the late eighteenth century, scrapbooks, letters and photographs, greetings cards, homemade games, dolls’ house furniture and more; and The Making Process, which showcases a variety of toys that have been made by children using unusual and unexpected materials, including dolls made from pipe cleaners, beads and nuts, birds and animals made from shells, and an African toy helicopter made from recycled tin cans.

On Their Own: Britain’s Child Migrants