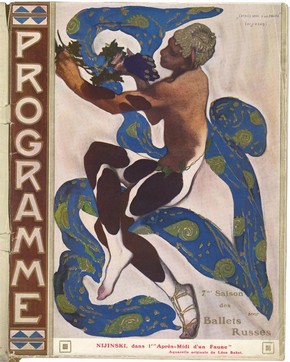 20th century ballet was born in St Petersburg, from a group of artists who were disenchanted with the arts scene in Russia. They included the painters Leon Bakst and Alexandre Benois, Serge Diaghilev, who had won fame for organising exhibitions of Russian paintings in Paris, and the choreographer Michael Fokine, who had become disaffected with the conservative, traditional ballets of Petipa.

By 1905 a new generation of dancers was in revolt against the conservatism of the Imperial Ballet. Their new ballet combined movement, music and design in a fusion that was to distinguish 20th century ballet. The subject matter of each ballet dictated the style of the choreography, music and design.

A dance programme was now of three or four short contrasted works rather than a full evening’s performance. Choreography became more expressive without formal mime movements and the corps de ballet became an integral part of the ballet instead of just a decorative background. 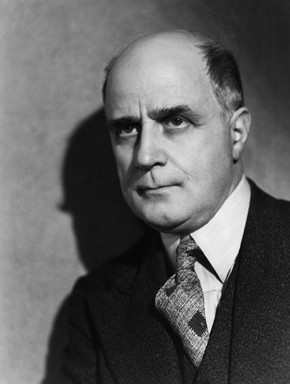 Overnight European ideas about ballet were overturned and ballet became an important art form. The success of Vaslav Nijinsky and Adolph Bolm restored the male dancer to popularity, the dancers became household names, and the designers the rage of Paris.

Although Michel Fokine was a famous dancer and teacher with the Maryinsky ballet in St Petersburg from 1898, his real vocation was for choreography.

He rejected formal classical ballets like The Sleeping Beauty and Swan Lake. He felt that dancing should be a truly expressive medium and not mere gymnastics, and that the type of movement, music and design should reflect the time and place of the subject.

To the conservative Russian theatres of his day, such ideas were dangerously revolutionary. So, in 1909, Diaghilev arranged for Fokine's ballets to be seen in Paris. Overnight ballet in Europe changed for ever.

Fokine was a demanding taskmaster. His dancers became used to his sudden rages, to chairs being thrown about the studio. But as one dancer said, 'He gets the best out of everyone. Anyone who has anything to give he enhances and makes still finer'.

Serge Diaghilev gathered dancers from the Imperial Russian theatres and in May 1909 they appeared in Paris. No one had seen ballet or dancers like this before and they were a great success. 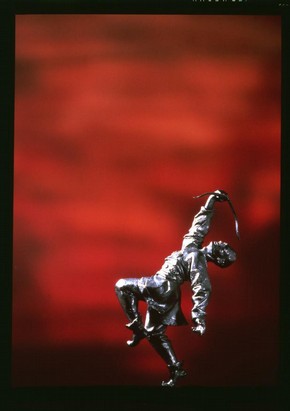 Les Sylphides was Michael Fokine’s tribute to the Romantic ballet. It used the corps de ballet in a new and expressive way. The rhythms of the Polovtsian Dances and Fokine’s uninhibited choreography, performed by Adolph Bolm, had the audience in a frenzy. It was Fokine who developed exciting new choreography for men and rekindled an interest in the male dancer.

The sensation of the first night of the Diaghilev Ballets Russes in Paris in 1909 was The Polovtsian Dances.

The wild savagery of Fokine's choreography, the pounding rhythms of the music and the chanting chorus whipped the audience into a frenzy. In Europe, the male dancer had become a figure of ridicule. No one could have imagined men dancing with such virile power and attack. Almost overnight the male dancer was restored to his place at the centre of dance.

Much of that credit must go to Bolm, whose performance as the Warrior Chief was at the centre of Fokine's highly choreographed chaos.

Dancing as if possessed, his performance evoked all the passion and proud freedom of the nomadic tribes. As one critic wrote: 'he is the Germ of destruction, the Spirit of Unrest … terrible but magnificent'.

Michel Fokine's 1910 ballet The Firebird was based on Russian fairy tales. The music was the first score commissioned by Diaghilev from the brilliant young composer Igor Stravinsky. The Firebird has magical powers. In order to escape capture by the young Prince Ivan, she gives him an enchanted feather that will summon her if he is in trouble. She later frees him from an attack by the wizard Kostchei and his monstrous followers. Ivan then marries the enchanted Princess who has been Kostchei's prisoner.

In this photograph of the Royal Ballet's production, taken in 1959, Margot Fonteyn is the Firebird. It shows the scene where she forces Kostchei's followers into a frenzied dance and then into an enchanted sleep. The ballet was one of the finest of The Royal Ballet's revivals from the Diaghilev Ballet repertory. Fonteyn was taught the role by Tamara Karsavina, who had been the original Firebird in 1910. 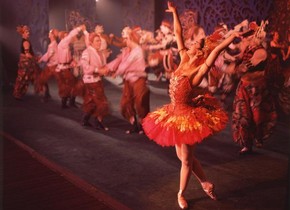 Margot Fonteyn as the Firebird, The Royal Ballet, 1959 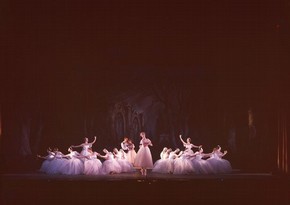 Colour photograph of Les Sylphides, a performance by the Royal Ballet Touring Company, 1963 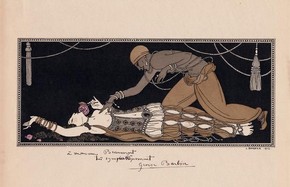 The role of the Favourite Slave was created by Vaslav Nijinsky, and the Shah’s favourite wife, Zobeide, by Ida Rubinstein. Barbier's print evokes the decadent sensuality of their performances. 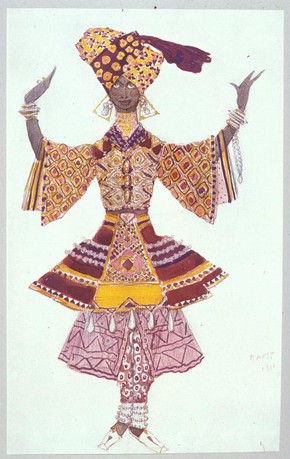 Costume design for a Temple Servant reproduced in the book The Decorative Art of Leon Bakst, London: The Fine Art Society, 1913. Museum no. ND699. B169

This shows one of Leon Bakst's superb designs for Michel Fokine's ballet Le Dieu Bleu in 1912. While the ballet itself was not a success, it was a magnificent example of Bakst design. He provided dozens of costumes, many of which were only seen for a few minutes – priests, princes, merchants, temple servants, temple dancers, girls carrying peacocks on their shoulders, whirling dervishes – all arrayed in sumptuous costumes.

A theatrical costume design is not a work of art. It is a working drawing for the costumiers, who translate the two-dimensional line and colour into fabric and texture.

This costume was made in the most vibrant purple and carmine silk, all encrusted with silver braid, sequins and pearls. All the costumes were equally richly patterned. It is a tribute to Bakst's eye that they formed a harmonious stage effect.

One of the ironies of theatre is that the costumes which survive are often from unsuccessful productions. Success means that the costumes soon deteriorate due to the heat of the lights, and the constant sweating and cleaning. The failure of Le Dieu Bleu meant that many costumes still exist to demonstrate Bakst's theatrical vision.

Diaghilev split with the Imperial theatres in 1911 and formed his own company, which toured extensively in Europe. 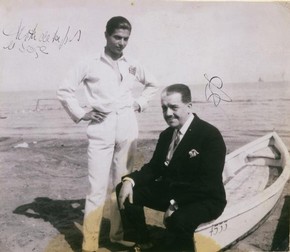 Photograph of Diaghilev and Lifar, 1928, London Archives of the Dance Associated

Until 1911 all the ballets were choreographed by Michael Fokine. In 1911 Nijinsky was dismissed from the Maryinsky Theatre for a breach of discipline, which many believe Diaghilev (who was Nijinsky’s lover and mentor) deliberately engineered.

Diaghilev formed the Diaghilev Ballet from dancers trained in Russian Imperial theatres, with Nijinsky as his star. They never returned to Russia and for the next 20 years the company was an itinerant group touring throughout Europe and, occasionally, America.

Aware of the need to sustain public interest, and the need for constant change, Diaghilev dispensed with Fokine and began to train Nijinsky as a choreographer.

On the first night of The Rite of Spring in Paris, there was a full-scale riot by the audience. In 1914, whilst on tour in South America, Nijinsky married fellow dancer Romola de Pulsky. In a jealous rage, Diaghilev dismissed him from the company.

Within months he had found a replacement for Nijinsky, the 16 year old student Leonide Massine, and turned him into a major choreographer and charismatic performer. 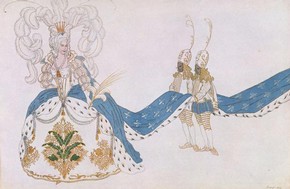 Costume design for The Queen & Her Pages in the ballet The Sleeping Princess by Marius Petipa (1818 - 1910) at The Alhambra Theatre, London, designed by Leon Bakst for Diaghilev Ballet Russes, Paris, France, 1921

Cut off from Russia by World War I and the 1917 Russian Revolution, Diaghilev turned to European artists and subjects. He commissioned major European painters and composers from the countries in which they performed.

Picasso designed The Three Cornered Hat and Parade, a surreal ballet. For the design of Parade, Picasso mixed popular art and Cubism. The musical score was written by Erik Satie and included the sounds of typewriters, aeroplanes and hooters.

Impressed by the financial success of the long-running British musical Chu-Chin-Chow. Diaghilev looked for a similar spectacular that might give his company financial stability. He turned back to Petipa’s The Sleeping Beauty, and mounted a production at the Alhambra Theatre in London, designed by Leon Bakst. He lost a fortune. 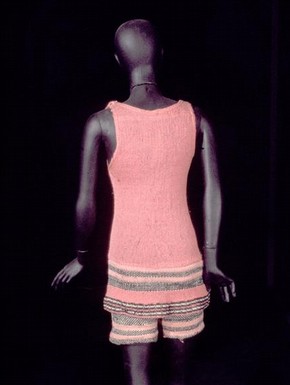 Ballets Russes in the 1920s

The company survived and throughout the 1920s kept the interest of its audiences with a succession of new and topical works. Nijinsky’s sister Bronislava Nijinska created Les Biches and Le Train Bleu, about the smart social set and the fashionable Riviera. After Nijinska came George Balanchine.

Diaghilev commissioned composers Igor Stravinsky and Serge Prokofiev, designers Marie Laurencin and Georges Braque, and couturiers like Coco Chanel to design costumes. Throughout the 1920s the company was still at the forefront of everything new in dance and theatre.

Diaghilev died in 1929. His company broke up but his dancers and choreographers continued to influence the world of dance. In England Marie Rambert and Ninette de Valois established companies of international importance. George Balanchine founded the first major classical dance company in America.

In the 1930s Fokine and Massine worked with the De Basil Ballet, reviving many of the works created for Diaghilev as well as creating new masterpieces.

Diaghilev’s legacy is the explosion of world dance in the 20th century.