The exhibition Alexander McQueen: Savage Beauty will be on display at the V&A in Spring 2015 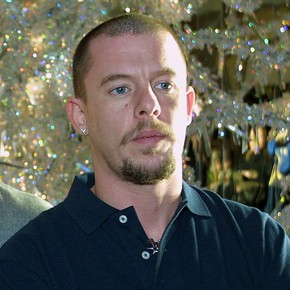 London born and educated, dubbed 'enfant terrible' by the fashion press, Lee Alexander McQueen (1969-2010) became one of the youngest designers to achieve the title ‘British Designer of the Year', which he won four times between 1996 and 2003. In 2003 he was awarded a CBE and named 'International Designer of the Year' by the Council of Fashion Designers.

After leaving school aged 16 he began work at Saville Row tailors Anderson & Sheppard, before moving on to Gieves and Hawks Saville Row, and the famous theatrical costumiers Angels and Bermans.

At 20 years of age McQueen began working for the Japanese designer Koji Tatsuno, who was constructing clothes from antique cloth, followed by the designer Romeo Gigli. Gigli was enthralled by the young McQueen's unique esoteric tailoring and employed him immediately.

He returned to London to complete an M.A. at St. Martins College of Art and Design, where his final collection gained him extensive press coverage, before launching his own label in 1992. Influential fashion stylist Isabella Blow purchased his entire graduation collection.

He was appointed head designer at Givenchy in 1996, succeeding John Galliano. In December 2000 the Gucci Group acquired a majority share of McQueen's own company, and he continued to serve as Creative Director. McQueen's sometimes stormy relationship with Givenchy ended in March 2001.

Over the next ten years McQueen opened stores in London, New York, Los Angeles, Las Vegas and Milan. Collaborative works included working with Puma on a special line of trainers; launching McQ, a younger, lower priced collection; the launch of Kingdom and My Queen fragrances; and a collection of cosmetics designed for MAC inspired by Elizabeth Taylor in her role of Cleopatra. His designs were worn extensively by celebrities including Nicole Kidman, Sarah Jessica Parker, Bjork and Lady Gaga.

In February 2010, shortly after his mother's death, McQueen was found dead in his London flat. His memorial service was attended by 2,500 guests, including the celebrities who wore his designs and friends and colleagues from the fashion industry.