The Art of the Book

At a time when the notion of the book is challenged by the advent of the screen and computer, there are many extraordinary ways in which the book has been treated by leading artists of today and the recent past, where the artist has been the driving force in conception and design. The past 20 years have seen outstanding work by some of the most influential and respected artists of our time.

These books reveal both the creative process and the soul of the artist in question. Some are iconic works which established the genre of the livre d’artiste after the Second World War; others are surprises from artists who are best known for their work with other sorts of material. Formats and production methods vary enormously. Some works show the virtuosity of traditional ‘hot metal’ printing techniques, others take the commercially-produced book as the starting point of their statements, yet others produce stunning large-scale installations and sculptures.

About the art of the book 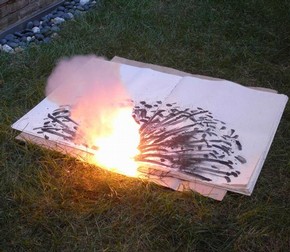 What happens when major artists of today – artists renowned for work in other media – consider the matter of books? The conventional book, a Roman invention which became a household article after the invention of printing, has only recently been rivalled by the computer screen and electronic text. Works take on a variety of formats, from bound volumes and photographs to sculptures and installations. They refer to the myriad functions of books besides transmitting texts. Their physical forms and visual aspect broadcast messages before we even approach or open them. Used for centuries as icons to proclaim authority, books have a symbolic life which allows us to discard worries about definitions (‘Is it a book?’, ‘Is it an artist’s book?’). We are taken out of conventional categories: ‘The danger is in the neatness of identifications’ wrote Samuel Beckett in an essay on what was to become 'Finnegans Wake'.  These words provide a fitting prologue, particularly since they concern an author whose texts, like many works shown here, push back to the reader the task of deriving meanings from words and shapes offered.

Current understanding of the term ‘artist’s book’ is conditioned by iconic works illustrated by artists, often co-operating with notable writers or using hallowed texts and driven by specialist publishers. The best involve a fusion between image and text, between graphics and physical form, such that subsequent readings of either text or image in different contexts can appear impoverished. 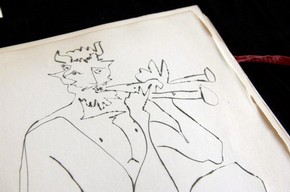 Books by artists today are happily not conditioned by historical reference but they provide a challenge to great works of the past.  Some of these - by Matisse and Picasso - are included in this exhibition. They set an international standard and were much emulated. Was this standard productive? Publications that paired writers and artists often resulted in fossilized works, though against a mass of conventional artists’ books from the late 1940s, Dubuffet’s 'Lunette farcie' or Iliazd’s celebration of the anniversary of Dada, 'Poésie de mots inconnus', stand out as showing what books could do to express vastly different artistic concerns. Guy Debord’s ‘anti-book’, 'Mémoires' (1959), an assemblage of cut-out citations and images subjected to Asger Jorn’s slashes of colour, encapsulates a whole attack – its relevance for the contemporary world provoked Paul McCarthy to rework it in 'Shit Plug' (2002); the abrasive sandpaper covers on Debord’s book, with their destructive and ‘Do-it-yourself’ messages, were significantly replaced in McCarthy’s version with a piece of fitted carpet.

A foil to finely-printed editions are the humble publications of Edward Ruscha, Sol LeWitt  and Dieter Roth. Totally revealing of their conception of ‘Art’, they avoided the gallery and art-publishing network as they had experienced it. To produce images of 'Twenty Six Gasoline Stations' (1962) at $1 for sale to supermarket customers may have bemused a shopping public who had different expectations of ‘Art’, but it had an enthusiastic response from those sympathetic to Conceptual and Minimalist ideas. Dieter Roth manipulates gestures and fragments of everyday imagery for an audience willing to move on from literal readings. There is a rather nice contrast in the work of Sol LeWitt from a literal approach to visual decoding to the calm preparation of frames and spaces in which a major – and beautifully produced – work of Borges, 'Ficciones' (1984), can be read. 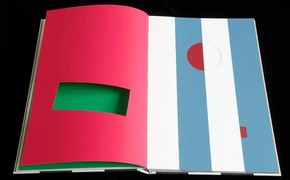 What critical apparatus can be brought to bear on artists’ books today? There can hardly be ‘rules’ to achieve works that communicate and encapsulate reactions to today’s world.  Books form an integral part of the oeuvre of some artists, as they do with Kiefer. A set of thirteen cabinets, named after Jesus Christ and each of the twelve Apostles, was produced by Damien Hirst to contain his ‘New Religion’ body of work, subsequently archived in another format, a published book of this title produced with the artist. Books have long been a preferred medium for Daniel Buren and Richard Long (a polarity around ideas concerning ‘nature’ appears in this exhibition).When traditional book-making technologies are used, are these the servant or the master? The exhibition contains some virtuoso contemporary printing and book design. Some artists enjoy matching the stately forms of typography with the dancing line of the draughtsman’s brush; others delight in pigment on carefully chosen papers, and create astounding surfaces with an éclat to rival illuminated manuscripts. Robert Motherwell’s gestures and subtle use of colours echo the reaction of the reading eye to the stately typography of the poetry; he takes the thought provoked by the text beyond the fixity of the type.

Artists are powerful interpreters of texts.  Balthus’s 'Wuthering Heights' (1993) and Paula Rego’s 'Jane Eyre' (2003) condition how we read the text.  Francesco Clemente creates moods that best explain the text. Quite different are works by Baselitz ('Le théatre de Séraphim,' 2003) and Louise Bourgeois ('Ode à ma mère', 1995) where the illustrator’s images almost physically reach out to strangle the argument. The '1 ¢ Life' of Sam Francis and Wallace Ting (1964), a real landmark, provides an irreverent party in which artists as varied as Karel Appel and Asger Jorn, Andy Warhol and Mel Ramos, carouse around words. 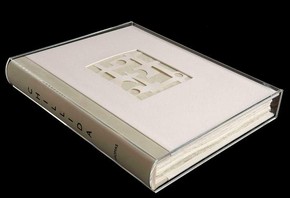 Books have functions unconnected with the texts or images they bear –most people keep books which remind them of events or relationships. Richard Tuttle’s 'NotThePoint' brings home to us the role of books as distillations of order, as vehicles for storage and memory. The physical shapes of such works prepare us for discovery, so that the magnificent casing of the Ivory Press publication of Chillida’s 'Reflections' conditions our approach to works contained.

Caro’s sculptures underline what we traditionally associate with the open book: access to the real life of thought. What of the future? Pierre Lecuire resorts to papyrus, the most ancient of writing surfaces: here, shadowy architectural shapes support the majestic capitals of the text. Bustamante uses photography to unveil an archaeology of landscape, the lay-out of Bellatin’s text mirroring the contortions of the image’s message. Jeff Koons’s part in designing a commercial paperback to record his own work results in an object that is in itself a statement. Martin Parr’s 'Benidorm Album' uses the humblest of solutions, a standard mount for colour photographs. In all their myriad formats, books continue as among the most potent means of artistic expression.

This content was originally written in association with the exhibition 'Blood on Paper: The Art of the Book', on display at the V&A South Kensington from 15 April - 29 June 2008.