A Choir Book from Florence 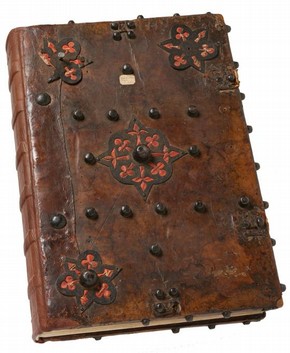 The choir book before conservation.

This choir book was made around 1380 in Tuscany, probably Florence. It was made for a house of the Camaldolese order, probably for nuns rather than monks. It was part of a set and contains chants to be sung as part of Masses dedicated to saints on their feast days. Music was an important part of the Mass ceremonial. Choir books were usually large, allowing several singers to gather around the book and read the musical notation at the same time.

You can listen to two sung prayers from the book, recorded by the Royal College of Music especially for the Medieval & Renaissance Galleries thanks to an award from the Arts and Humanities Research Council.

English translation:
Alleluia! Lord remember David,
and all the hardships he endured. Alleluia!

Inveni David servum meum (I have found David my servant)

English translation:
I have found David my servant,
with my holy oil I have anointed him,
so that my hand shall ever abide with him,
my arm also shall strengthen him.
Alleluia.

The manuscript is bound between heavy wooden boards covered with leather and decorated with metal bosses. The folios are made of goatskin parchment. There are 21 quires, most containing 4 bifolia, making a total of 167 folios or 334 pages.

These folios had been sewn onto bands of alum-tawed skin that were then laced into the wooden boards and fixed in place with small tacks. The manuscript includes 21 beautifully decorated initials and miniatures, probably drawn and painted by Dom Simone Camaldolese (active 1378-1405).

It is presumed the boards, their leather covering and their metal 'furniture' are original and thus of the 14th century. The manuscript was rebound, perhaps in the 17th century, incorporating the original boards. The sewing, endbands, spine leather, alum-tawed bands and probably the paper board sheets are part of this rebinding.

The book was acquired by the Museum in 1865.  It was recently given a thorough assessment to establish the conservation work that would be required to prepare it for long-term display in the new Medieval & Renaissance galleries.

Over the centuries the book had been stored vertically rather than laid flat, and this had put the binding under great stress. The weight of the boards and a weak binding structure meant that the binding had badly deteriorated.

The upper board of the cover, the spine linings and the first few quires of the manuscript itself were completely detached. The sewing was also broken in various places. The condition was so poor that it was difficult to handle the book without causing further damage.

In addition, the surface of some folios had become extremely dirty over time, significantly altering the appearance of the manuscript. Some of the pigments and gold leaf used to produce the richly illuminated letters and miniatures had become loose and begun to flake.

It was decided that the manuscript required full conservation and re-binding prior to inclusion in the Medieval & Renaissance galleries. The need to conserve this manuscript provided an opportunity for a major research project. Christopher Clarkson, an international authority on medieval bindings, was invited to join the team of V&A conservators and curators. 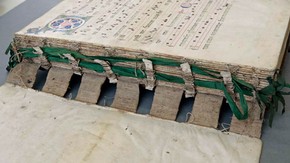 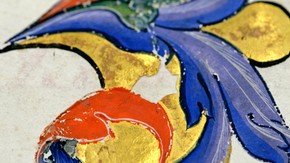 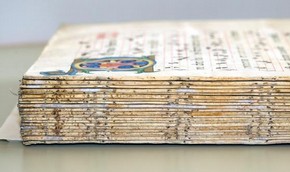 The manuscript before rebinding.

The first phase involved 'pulling' the manuscript (removing the binding and taking the book apart) so that it could be prepared for rebinding. The non-original papers covering the wooden boards were lifted and removed, and the boards were X-rayed. The leaves were cleaned, the parchment was repaired, and the pigments were consolidated. Analysis was undertaken to establish which pigments and wood had been used.

The second phase of work focused on preparing the book for rebinding. Throughout the project Rowan Watson, the specialist curator for books and manuscripts at the V&A, was involved in every decision regarding the conservation treatment, the format (meaning the order of the endpapers and quires) and the retention of evidence relating to the previous binding.

The surface of the manuscript folios was carefully cleaned using a combination of a chemical sponge, a Staedtler Mars Plastic eraser and a Japanese soft- bristled brush.  The eraser was used, where possible, around the edges and down the margins. The chemical sponge was used in other areas by cutting it into small pieces and dabbing or wiping the surface avoiding illuminations and manuscript.  The pigments used in the illumination were consolidated with a solution of isinglass (made from the swim bladder of a sturgeon). 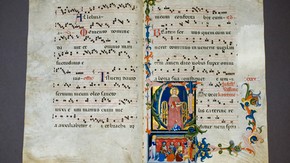 A partially cleaned area illustrates the extent of the surface dirt. 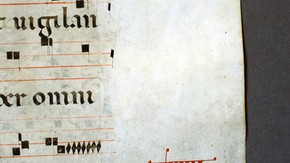 Detail of the cleaned area. 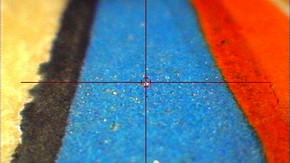 Once the binding had been removed and the quires separated, it was possible to arrange the analysis of the materials and pigments.  Sample analysis of the pigments was not possible but non-destructive elemental analysis, by Lucia Burgio, a scientist at the V&A, pointed to the use of a wide range of pigments, including red lead, vermilion, haematite, azurite, lapis lazuli, lead white, organic pink, massicot, copper green (possibly malachite), mosaic gold, carbon black and gold.  Analysis of the black ink was not conclusive. It might have been a carbon-based ink or iron-gall ink.

Analysis of the Boards 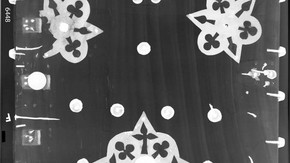 X-radiograph of front board.

The X-radiography of boards was carried out by Janet Ambers of the  Department of Conservation and Scientific Research at the British Museum.  It revealed previous positions for the metal studs and three very long nails embedded from the spine edge of the upper board.

The metal bosses on the corners had been repositioned at the time of the rebinding. Dr Caroline Cartwright, also of the British Museum, identified the wood as poplar.

The rebinding was a complex process. The metal furniture on the covers had to be removed so that the leather that covered the boards could be lifted. This had to be done to reveal the channels for the bands that were used to attach the manuscript to the cover. Sophia Wills, metalwork conservator at the V&A, undertook this work.

The board paper was lifted and removed.  The leather was lifted along the spine edge so it could be re-backed with new leather.  The old laced bands were detached and the channels in the wooden boards cleaned of filler.  Once the binding was re-sewn and  re-backed, the metalwork was reattached.

After repairing the back folds, the manuscript quires were sewn together using a custom-made sewing frame constructed by Chris Clarkson as none of the sewing frames in the studio at the V&A were large enough. Two people were needed to sew the quires onto the new skin bands that were then used to attach the wooden cover.  Wooden dowels and wedges were used to fix the bands to the covers. The spine was lined between the bands and then covered with new leather.

The metal bosses were removed with the help of wooden wedges. (fig 1)

The metal bosses were removed with the help of wooden wedges. (fig 2)

The metal trilobe was rotated to allow the board leather to be lifted along the spine edge.

Lifting the leather to reveal the channels through which the bands were laced.

On the sewing frame. Note the concertina along the spine. Made of Japanese paper, it is sewn to the quires as part of the sewing structure.

Two conservators working on the choir book. One uses a bone-folder to rub down the spine crease that creates the concertina.

Working together to sew the book. One conservator is passing the needle through the centre of the spine fold from the outside of the text block.

The second conservator is taking the needle and passing it around the band and back through the fold to the inside of the quire.

Second conservator forming the kettle stitch at the end of the line of sewing. This is the stitch that holds the quires together.

Sewing completed. The quires are now sewn to alum-tawed bands to form a text block. These bands will then be used to attach the text block to the boards.

The text block is attached to the wooden boards. The wooden dowel is tapped in using a small hammer.

The softwood wedge is trimmed flush with the board.

The bands are fixed with a wooden dowel and a softwood wedge.

The endbands are made of unbleached linen, sewn over alum-tawed cores. They reinforce the attachment of the boards at top and bottom (head and tail).

Lining the spine. The space between the bands is built up with natural goatskin to provide greater support.

The new leather spine is rubbed down to ensure adhesion.