Adire are indigo resist dyed cotton cloths that were made by women throughout Yorubaland in south-western Nigeria. Resist-dyeing involves creating a pattern by treating certain parts of the fabric in some way to prevent them absorbing dye. Cloths were made up of two strips of factory produced cotton shirting sewn together to form a shape that was roughly square. They were generally worn by women as wrappers. However, by the mid 1960s when the V&A was buying adire textiles they were also being tailored into garments such as men’s shirts. At this time adire was popular again after falling out of fashion in the late 1930s. Its success was short-lived and it was quickly superseded by other forms of resist-dyeing such as ‘kampala’.

Cloths were usually prepared, and always dyed, by women. The dying was done in large earthenware dye pots which were partially sunk into the ground. The dye used was made either from indigo leaves which grew locally or imported indigo grains. If leaves were used they would be collected into balls and allowed to ferment. The indigo was added to water which had been softened with caustic soda. The cloth would be dipped into the dye and then pulled out to allow it to oxidise and take on the bright blue colour. This process would then be repeated, the more times a cloth was dipped the darker it would become. Sometimes after it had been dyed the cloth would be beaten with a mallet so it took on a sheen.

Before dying cloths would be treated in a variety of ways to create patterns that would be revealed after dying. Raffia and starch were the two most common forms of resist used in the production of adire.

When raffia is tied around the cloth to act as a resist the cloths are known as adire oniko.  A great variety of patterns can be produced using this method.  For example, small circles can be created by tying small stones or seeds into the cloth and larger circles can be made by lifting a point of fabric and then binding the fabric beneath it tightly. 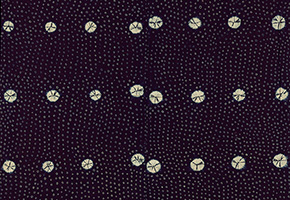 Indigo resist dyed cotton, Ibadan, Nigeria 1960s. Museum no. Circ.592-1965. © Victoria and Albert Museum, London
This cloth is an example of adire oniko, the pattern of was known as olosupaeleso or ‘moons and fruit’ in Ibadan when this cloth was purchased. 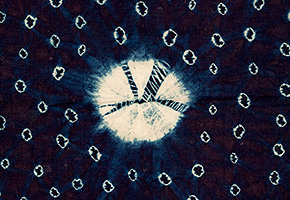 Detail of indigo resist dyed cotton, Ibadan, Nigeria 1960s. Museum no. Circ.592-1965. © Victoria and Albert Museum, London
This cloth is a detail of adire oniko cloth in an olosupaeleso, 'moons and fruit', pattern.

Using these two different types of circle in various combinations and arrangements can create a wide variety of patterns. Sometimes a specific combination of circles would be given a name but the names often varied from town to town or changed over time. In 1964 in the city of Ibadan five rows of large circles with small circles filling the rest of the cloth was known as olosupaeleso which means moons and fruits.

Another way that patterns could be created using raffia was by folding the cloth from corner to corner like a concertina and then binding it very tightly at various points. When the two pieces of dyed cloth were stitched together is created a diamond shaped pattern with alternating blue and white stripes. The broadness of the stripes can be varied by the intervals at which it is bound.

One of the most important factors in the popularity of adire during the 1960s was that a large number of cloths could be produced quickly and cheaply in response to changing customer demands. When these cloths were bought by the museum it was explained to the curators that the cloth produced by folding and tying was considered ‘cloth of the year’ in 1964 due to its popularity while olosupaeleso was at its most popular in 1962 but had since fallen out of favour. 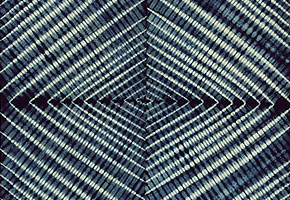 Indigo resist dyed cotton, Ibadan, Nigeria 1960s. Museum no. Circ.591-1965. © Victoria and Albert Museum, London
An example of adire oniko, this cloth was considered ‘cloth of the year’ in 1964 due to its popularity. 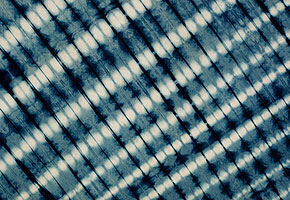 Details of indigo resist dyed cotton, Ibadan, Nigeria 1960s. Museum no. Circ.591-1965. © Victoria and Albert Museum, London
A detail from an adire oniko textile considered to ‘cloth of the year’ in 1964 due to its popularity.

The term adire alabare is used when sewing has been used as a means to resist the dye. If the sewing has been done with raffia then it would be a form of adire oniko. Both machine sewing and hand sewing could be used to produce patterns. Although adire cloths were usually made by women the cloths that used a sewing machine were made by men. (Fig 3) 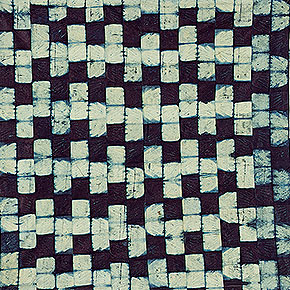 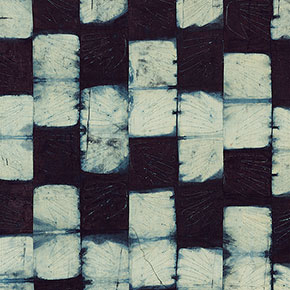 Cloths decorated by using starch made from cassava flour to resist the indigo dye were known as adire eleko. The starch was only applied to one side of the cloth so the underside would be plain blue. The use of starch allows for a greater variety in the patterns that can be created. Starch could be applied through a stencil or painted on to the cloth freehand.

Like machine sewing, both cutting the stencil and using it were activities performed by men. The starch was applied using a piece of metal; a comb-like device could be used to create patterns in thickly applied starch. The size and complexity of the stencils varied a great deal. One of the most common stencilled designs features King George V and Queen Mary at its centre. The image was originally taken from souvenirs produced in 1935 to celebrate the silver jubilee. 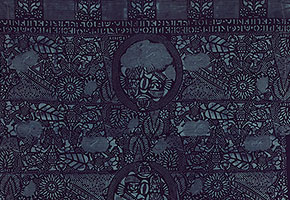 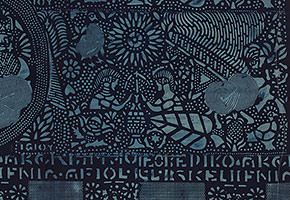 Hand painting was probably the most time consuming way of producing adire and these cloths were not subject to the same rapidly changing fashions as the adire oniko designs. The painting was done by women using chicken feathers, the mid rib of a palm leaf and matchsticks to create different thicknesses of line. Hand painted cloths were usually divided up into squares or rectangles which would then be filled in with a variety of patterns.

The centre of production for hand painted cloths was the city of Ibadan. The city itself was celebrated in one of the common patterns which was known as Ibadan dun, ‘Ibadan is good’ in Yoruba. This pattern takes its name from one square in particular which shows the pillars of Mapo Hall (Ibadan’s town hall) alternating with spoons. The example in the V&A collection also has Ibadan dun written on it, so there can be no doubt. Cloths, particularly hand painted ones, were often signed on the hem and this is one of two in the museum that has been signed using a symbol that appears to be a scorpion.

The symbol also appears on the front of the cloth in several places suggesting that having a cloth painted by this woman is something the owner would be keen for people to know. Unfortunately it has not been possible to associate the symbol with a name.