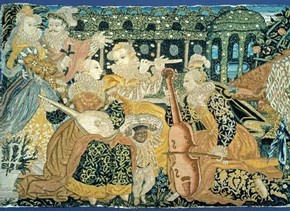 Valances were the borders that ran around the two sides and end of a bed. This example from the Tudor period features a small African boy holding up a score for a group of musicians, acting as a living music stand. A fashion for possessing black domestic servants developed in Europe in the mid 15th century. Black African servants were used as status symbols by their owners. They were dressed in white or brightly coloured clothing and bejewelled with gold or pearl earrings to emphasise the blackness of their skin and function as exotic household embellishments, but in a position of servitude and inferiority.

Black children were particularly popular as servants, perhaps because they were considered easy to train. Wealthy and cultured European women, such as Isabella d'Este, Marchesa of Mantua 1490-1539, specifically requested agents to seek out black children for their courts.

Children and adult African slaves were sometimes baptised and then freed, as Christian teachings stated that fellow Christians should not be enslaved. The problem was addressed by Pope Calixtus III in the 1450s. He claimed that every converted slave was another soul for Christ. 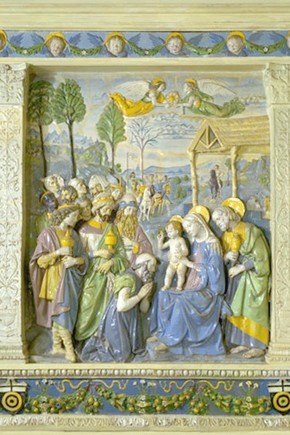 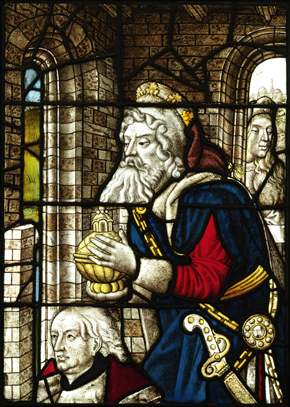 Although the black king was fairly common in Northern European art by the end of the 15th century, it was less frequent in Florentine Renaissance art. Black attendants are sometimes included in the retinue of three white Magi as is the case with this tin-glazed terracotta altarpiece, pictured above left. An African attendant is visible to the left behind the figure of the youngest king.

The stained glass window to the above right features the Adoration of the Magi. The African king in the right hand panel also has a black servant at his feet, holding a gold vessel up to him. Both figures are dressed in rich clothing, and wear gold earrings.