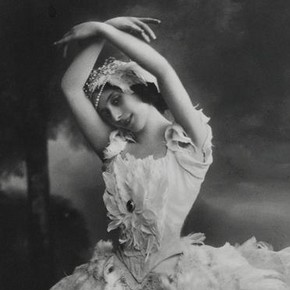 Anna Pavlova in Michel Fokine's solo The Dying Swan, 1905, postcard from a photograph by Schneider, Berlin, Germany, about 1909

Anna Pavlova (1881 - 1931) was one of the most famous ballerinas of all time. Dance was her vocation and no other dancer in the days before air travel toured so widely – Australia, the Far East, the United States, South America and India. She danced for audiences who had never heard of ballet and inspired a generation of children to take up dancing, including Alicia Markova, and the choreographer, Frederick Ashton who first saw her in Peru.

Born in St Petersburg, Pavlova was inspired to dance after seeing a production of the ballet The Sleeping Beauty. She trained at the Imperial Theatre School but by 1906 she was associated with the revolutionary ideas of Michael Fokine, who choreographed the famous Dying Swan for her.

In 1909 Pavlova danced with Diaghilev’s group in Paris, featuring on the poster advertising the season, but she could never be happy in a company where the ballerina was not supreme. 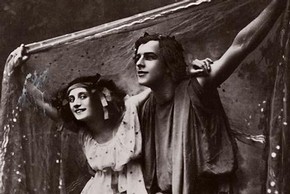 In 1912 Pavlova appeared in the first Royal Variety Performance. She was very competitive and during a curtain call slapped the face of her partner, Michael Mordkin, because she thought he was getting more applause.

The feud between Pavlova and Mordkin was much reported in the press. The pair were a sensation when they appeared together at the Palace Theatre, one of London's leading music halls, in 1910.

They first appeared in a classical pas de deux, performed with such style and beauty that they took ten curtain calls, an extraordinary number for a music hall. Nothing prepared the audience for what came next.

Gone were Pavlova's tutu and Mordkin's ballet costume, gone her pointe shoes. In Greek tunics and sandals, they flung themselves onto the stage in the 'Autumn Bacchanal', one of the most tempestuous and passionate dances ever staged. 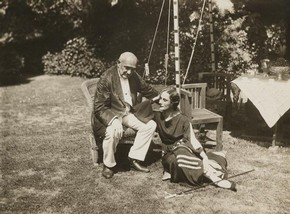 Anna Pavlova bought Ivy House in Golders Green, north London in 1912. In 1913 she resigned from the Russian Imperial Ballet and Ivy House became her permanent home.

In the huge garden was a large pond with swans, which she studied to bring realism to her most famous role The Dying Swan.

From Ivy House, ballets were conceived and rehearsed and sets and costumes were made and stored. Frequent articles and features appeared in papers and magazines, showing pictures of her entertaining friends and 'relaxing' for the cameras.

By 1913 she had formed her own company, of which she could be the undisputed star. If Diaghilev made ballet a serious art, she made it a world-wide popular entertainment. Pavlova was interested in local and national dances, and created works based on Japanese and Indian dance, in which she appeared with the young Uday Shankar. 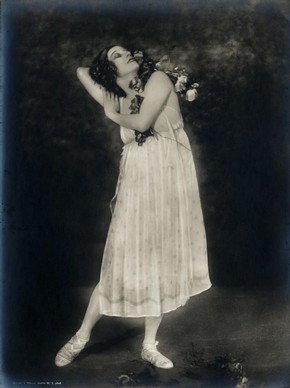 Anna Pavlova in Autumn Bacchanal, black and white photograph, about 1920

Pavlova, more than any other dancer, symbolised the ballerina for the 20th century - the dark expressive eyes, the pale oval face surrounded by severely dressed dark hair, the elegant, almost emaciated figure and the almost religious dedication to dance.

The popular image of Anna Pavlova is in her most famous solo, The Swan. In fact, Pavlova had an extraordinary range. She danced Giselle. She performed roles calling for elegance and charm, like the flirtatious Kitri in Don Quixote or the beautiful woman in Christmas.

There were solos that captured the essence of creatures like the Dragonfly or flowers like Californian Poppy. There were ballets inspired by countries she visited, like Japan and India, and their dance styles.

The Autumn Bacchanal showed another side. This was a dance that transmitted the Dionysian spirit of ancient Greece. She became possessed, intoxicated, not just, as the dance indicated, by wine, but by the very movement itself. Her frenzy transmitted itself to the audience and those watching would shout to her as though they too were dancing the ancient orgiastic rite. Such qualities cannot be learned. As her teacher, Cecchetti, remarked, 'I can teach everything connected with dancing, but Pavlova has that which can only be taught by God'.

Pavlova was meticulous about her appearance on stage but equally concerned with her off-stage image. She was a supremely elegant woman, who looked as smart in the pre-1914 fashions as in those of the 1920s. She was always perfectly groomed and obviously took as much care with her image as any of today's supermodels.

Innumerable publicity photographs of her survive, taken in front of well-known buildings and landmarks around the world. She could even maintain her famous poise and elegant chic on a camel. 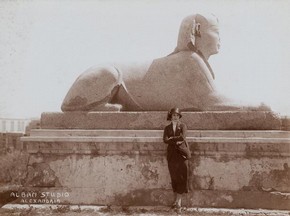 Worn out by touring and the stress of performing she died of pneumonia in 1931, aged just 51. According to legend, her last words were to her dresser telling her to get her Dying Swan costume ready.

Anna Pavlova believed that it was her mission to take ballet to the world. She appeared in countries which had hardly heard of ballet and whose dance traditions were very different. She toured small towns as well as the major cities. She captivated audiences everywhere with her artistry and her passionate commitment and inspired a whole generation of girls to take up ballet.