Archigram: The Walking City, Living Pod and the Instant City

Archigram: The Walking City, Living Pod and the Instant City 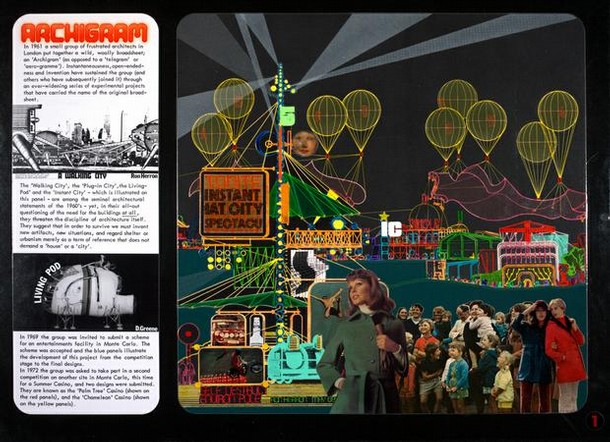 This panel was created by the radical collective, Archigram (from ARCHItecture and teleGRAM) and uses collage to showcase 3 experimental British architectural designs of the 1960s. They include Walking City, a peripatetic giant reptilian structure, Living Pod a minature capsule home and Instant City, an airship containing all the cultural and education resources of a metropolis which could land in remote areas giving inhabitants a taste of city life.

The architects who made up Archigram were Warren Chalk, Peter Cook, Dennis Crompton, David Greene, Ron Herron and Michael Webb. They all shared the aim of challenging an architectural establishment they felt had become reactionary and self-serving. The collective launched its critique and its proposals for a better future with an eponymous publication in 1961.

Archigram created this panel in London during the early 1970s. Sixteen panels were produced as part of its submission to a competition for a new summer casino and club in Monte Carlo. This introductory panel was purchased by the V&A from the Archigram architectural practice in 1974, after the Monte Carlo project fell through in 1973.

Collage had rarely been used as a device in architectural design until Archigram made it a characteristic part of its work. The adoption of this style differentiated the collective's work from orthodox architectural designs of the late Modernist period which were often spare and colourless. The main illustration depicts the design for Instant City. Its hot air balloons that deliver urban thrills to rural areas evoke comparisons with Jules Verne, early science fiction and Victoriana. The use of magazine ephemera creates the aesthetic of advertising; Archigram promises alcohol, cars, dangerous stunt shows and pretty models to an entranced audience. In its vision, technology has the power to emancipate society and give us more time to enjoy ourselves.

'Owing to lack of interest, tomorrow has been cancelled' was the title of an article by Warren Chalk from 1969. Although the article is optimistic in tone, the title suggests that, perhaps prophetically, Archigram had eventually begun to question the potential of technology. As a phrase it is a frequently used graffiti slogan.

Although most of Archigram's projects remained unbuilt, its conceptual contribution was considerable. Questioning the Vitruvian notion that buildings need to be static entities, it offered mobile, miniaturised and technologically-rich alternatives. It encouraged us to think about what we really needed from architecture, and about whether the conventional approach was providing us with optimum solutions. Archigram's influence can be seen in the work of world-class architects: from Renzo Piano's and Richard Rogers' Centre Pompidou to the designs of Toyo Ito. In recognition of the group's substantial contribution to international architecture, Archigram was awarded the RIBA Gold Medal in 2002 on the strength of its conceptual ideas.