Architectural Models in the V&A and RIBA Collections

Architectural models have served a variety of functions over the centuries and in different cultures. Ranging from ancient China and medieval India to early 19th century Italy and contemporary London, this is a selection of models drawn from the collections of the V&A and RIBA.

Excavations carried out in Italy from the 1730s led to a new interest in the buildings and monuments of ancient Greece and Rome. Many folio editions illustrating ancient buildings were published, and by the 1770s, students at the French Academy in Rome were required to produce accurate drawings of selected monuments in the city.

Models of ancient buildings were also produced at this time. Perhaps the most famous model-makers were the Parisians Jean-Pierre Fouquet and his son François Fouquet. In Britain, their plaster models were bought by architects such as John Nash, whose collection of models passed to the V&A in the 1850s.

In the nineteenth century, travel became easier with the development of the railways and shipping lines, so more people were able to visit abroad. Some lived abroad in Europe's overseas colonies. In various countries people could buy souvenir models of local buildings.

Models were also commissioned by educational institutions, such as the South Kensington Museum. These enabled students who could not afford to travel to study a wide range of artistic examples. Models were first displayed alongside casts of architecture and sculpture in the Architectural Courts at the Museum, which opened in 1873.

In India, models were sometimes made for presentation to visiting royalty or high officials. Several models in the V&A's collection were made for high-ranking officials of the colonial administration. Models were also shown at the great international exhibitions of the late nineteenth and early twentieth centuries. In some cases they were made to commemorate a new building.

Models may be accurate reproductions of particular buildings. They can also be generic examples of a type, or compositions based on parts of existing buildings.

Models were made of famous and distinguished Indian buildings in the nineteenth century, often for Europeans living in India. This tradition parallels that of Company Paintings, where scenes of Indian life and architecture were painted for European patrons during the rule of the East India Company and the British Raj.

Sometimes models were made before the original building was damaged or rebuilt. Models can thus provide an important record of damaged or destroyed buildings.

Miniature architecture has been used in religion and ritual in many different cultures over the centuries. Models of Buddhist or Christian sacred buildings could be sold as souvenirs to pilgrims, then venerated at home. Containers for holy relics sometimes took the shapes of sacred architecture. In ancient China model buildings were used as funerary goods.

Architectural motifs often appear on ritual objects such as incense burners, lamps and shrines. A whole building could be shown in miniature, but often only parts of a building such as a gateway or roof might be incorporated to decorate the ritual object.

Miniature buildings have sometimes been made as expressions of fantasy. Buildings or architectural elements have often been used to provide form or decoration for some apparently unrelated objects, such as a wine jars, biscuit tins or workboxes. 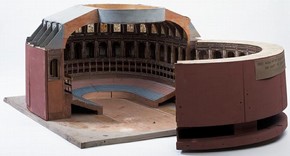 Architects and designers make working sketch models as part of the design process and presentation models to show concepts to clients. A three-dimensional visual aid is often the best way of conveying information, particularly to people who cannot easily read two-dimensional architectural drawings or relate to a three-dimensional CAD (Computer-Aided Design) image on a computer screen.

The level of and type of information shown in design models varies. They may for example show such details as façade finish, alternatives for windows and doors or specific aspects of a particular stage of an architectural project. In some cases they show tensile qualities, amenities access and interior details or broader layout schemes placing the building in its environment. 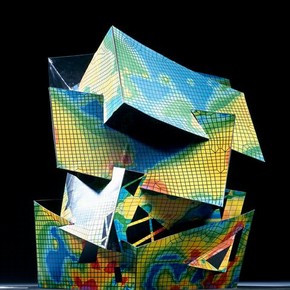 Structural analysis model for the Spiral. Designed by Daniel Libeskind in collaboration with Cecil Balmond, Britain, 1997. Museum no. V&A Archive A0135(4)

Most design models are made for a particular short-lived purpose and, unlike the building they represent are not intended to last long-term. The materials traditionally used reflect this: paper, cardboard and plaster, although wood - which requires more skill and is more expensive - makes a more solid model. Today modern materials such as perspex are also used and new technology such as SLR (Stereo Lithography Reproduction) can try out different dimensions for the building. Ironically some models do outlive the buildings for which they were just a small part in the design process. Others remain the only manifestation of unbuilt buildings.