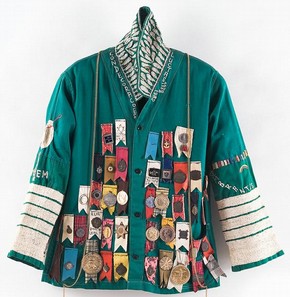 The display brought together over 80 artworks ranging from sculptures, hand-embroidered banners and garments, showcasing the variety and creativity of Arthur Bispo do Rosario (1909-1989), one of Brazil’s most recognised artists.

Admitted to a psychiatric hospital at the age of 29, Bispo’s creations were made in complete isolation from the art establishment. However his ‘outsider’ art has long been celebrated for its skill and imaginative approach to working with everyday, found materials. The display demonstrated his fascination for the reappropriation of objects such as buttons, bottles, paper, card and cutlery, which he manipulated to create elaborate sculptural pieces.

The Prisoner of Passage [extract] - video documentary by Hugo Denizart

Psychoanalyst Hugo Denizart made this documentary in 1982 at the request of the Brazilian Ministry of Health to investigate conditions at the hospital Colônia Juliano Moreira. In the process he discovered Arthur Bispo do Rosário and his work and was so impressed that made him the subject of the documentary instead.

Organised and supported in association with Prefeitura da Cidade do Rio de Janeiro/Secretaria de Cultura, FUNARTE and the Museu Bispo do Rosário Arte Contemporânea, supported by CAIXA and the Embassy of Brazil in London.

Part of the London 2012 Festival

We are grateful to the Secretary of State, the Department for Culture Media and Sport, and the Arts Council England for the generous provision of UK Government Indemnity for this display.

This content was originally written in association with the display 'Arthur Bispo do Rosário', on display at the V&A South Kensington from 13 August – 28 October 2012.