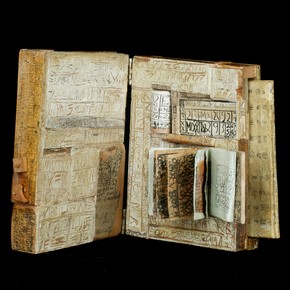 Artists' books are books made or conceived by artists. There are fine artists who make books and book artists who produce work exclusively in that medium, as well as illustrators, typographers, writers, poets, book binders, printers and many others who work collaboratively or alone to produce artists' books. Many artists' books are self-published, or are produced by small presses or by artists' groups or collectives, usually in limited editions.

Artists' books that maintain the traditional structure of a book are often known as book art or bookworks, while those that reference the shape of a book are known as book objects. Other types of work produced by artists in book format include concrete poetry, where meaning is derived from the spatial, pictorial and typographic characteristics of the work, as well as from the sense of the words.

Contemporary artists' books are noteworthy for their many different forms and perhaps because of this they have an equally large number of precursors and influences. Artists have been associated with the written word since illuminated manuscripts were developed in the medieval period. Many have been concerned with books as an artistic enterprise, notably William Blake at the end of the 18th century and William Morris at the Kelmscott Press from the 1890s. Avant-garde artists throughout the 20th century also produced many books as part of their artistic endeavours.

It is however the livre d'artiste, also known as the livre de peintre, that is generally considered to be a key precursor to the contemporary artists' book. Originating in France around the turn of the 20th century, the livre d'artisteis a form of illustrated book. They are distinguished by the fact that the pages have been printed directly from a source created by the artist themselves rather than from a source that has been created by a technician from the artist's design. An early exponent of the livre d'artiste was the dealer Ambroise Vollard who commissioned Pierre Bonnard to illustrate with lithographs a collection of poems by Paul Verlaine, Parallèlement, published in Paris in 1900 (NAL pressmark: Safe 1.A.1). The works produced were essentially deluxe, limited editions, produced on high quality paper using specialised printmakers. They were generally left unbound so that they could be dismantled for display and so that bespoke bindings could be commissioned if desired. Vollard produced numerous works in association with a number of artists, matching them up with texts to illustrate. Various other publishers followed suit, collaborating with artists of their own association. The National Art Library holds a number of livres d'artisteswhich are described in the exhibition catalogue: From Manet to Hockney: modern artists' illustrated books, edited by Carol Hogben and Rowan Watson, London: Victoria and Albert Museum, 1985 (NAL pressmark: CTR REF). 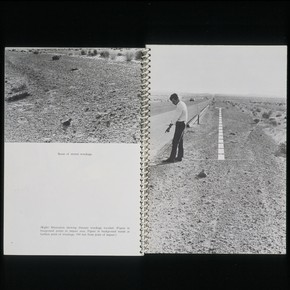 In the 1950s and 1960s Swiss-German artist Dieter Roth (1930–98) and American artist Ed Ruscha (1937–) created conceptual works which are considered the foundation of the artists' book genre. In 1962 Ruscha published the first edition of Twenty-six gasoline stations (NAL pressmark: SA.91.0042) which comprised 26 deadpan photographs of gasoline stations along Route 66 from Los Angeles to Oklahoma City. The book was not intended as a means for the reproduction of pre-existing photographs, but rather as an artwork in its own right. As the piece retains the essential characteristics of a book, such as the idea of seriality and sequence provided by the turning of pages, it is considered central to the development of the genre. Ruscha produced a series of bookworks in a similar vein. Another characteristic of this series was that they were published in unlimited editions, had a wide distribution and were inexpensive to buy, in a deliberate attempt to bring art to a wider audience.

Roth's distinctive contribution to the genre was his examination, through his bookworks, of the formal qualities of books themselves. These formal qualities, such as flat pages bound into fixed sequences, were deconstructed and investigated, this investigation becoming the subject matter of the book itself. For example 2 Bilderbücher (1957) (NAL pressmark: X920000) consists of two picture books of geometric shapes with die-cut holes cut into each page to allow glimpses of patterns from the pages beneath. Subsequent works such as Daily Mirror (1961) involved the use of found materials manipulated to a particular purpose, a technique that was much used by later book artists. 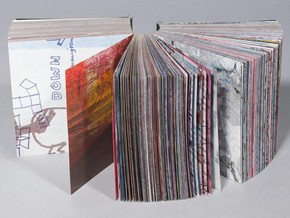 Artists' books became popular throughout the 1960s and early 1970s and the genre has continued to expand. During the 1980s and 1990s many more artists began to use the book as a medium for self-expression and they continue to do so. Techniques remain varied and range from the traditional to the experimental. Small presses and individuals have continued to promote the art of letterpress printing and the hand-crafted book. Some artists have chosen to use computer-generated images while others have used the photocopier to reproduce their work. Many artists have taken up the challenge to experiment with the content and physical structure of the traditional book form. Bookworks and book objects have continued to step outside conventional boundaries to encompass concepts associated with the fine arts. Works range from the minuscule to the gargantuan. Bookworks are not restricted to the use of paper and ink but can incorporate all kinds of materials and appended objects. While such works are usually unique or limited editions, some are produced in multiple copies. 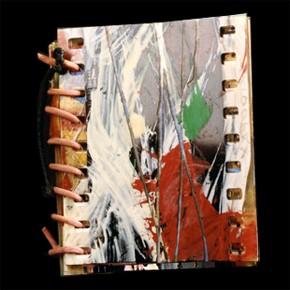 The National Art Library holds the largest collection of artists' books in the UK. The collection is international in scope and is particularly strong in examples from the British Isles and the United States. The Library also has significant holdings from other western European countries, as well as some examples from Russia, Australia, Latin America, Japan and a number of other countries. The collection includes both multiples and unique works. New acquisitions of works are made on a highly selective basis.

Catalogues
Artists' books are all listed on the NAL catalogue. Known items may be found by searching under the artist's name or the title of the book. Items can also be found by selecting a Genre or Publication Format Keyword search from the dropdown list and entering the appropriate search term e.g. artists books, book objects, pop-up books, etc.

Access to Artists' Books
Access to the Library is by reader's ticket. For more information see, Registering to use the National Art Library. Due to the fragile nature of much of the material, readers are encouraged to be selective in choosing the items they wish to see. Artists’ books will only be retrieved once you have arrived at the Library, even if they have been requested in advance. A maximum of 3 items may be consulted at a time.

Group visits can also be arranged to look at artists' books in the Library's collections.

The V&A is committed to respecting the intellectual property rights of others. We have therefore made all reasonable efforts to ensure that the reproduction of content on these pages is done with the full consent of copyright owners and that all credits are correct. We apologise for any inadvertent omissions. If for some reason a credit has been omitted, or there are queries in this respect, please email webmaster@vam.ac.uk