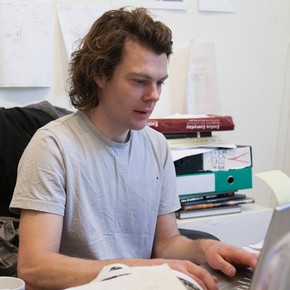 Laurence Kavanagh was Automata Artist in Residence from July-December 2010. Laurence had special access to the V&A's and the Crafts Council collections for study, research and inspiration.

Laurence Kavanagh studied Fine Art and Art History at the University of Newcastle Upon Tyne. Whilst developing his studio practice as an artist in London, he also curated four group exhibitions in London-based independent spaces and public galleries: Gate 13 (2003), Corpa Nova (2004), Wider than The Sky (2005), The Music of The Future (Gasworks Gallery, London, 2007). In 2007, a residency at the British School at Rome enabled him to focus full time as an artist and also triggered his interest in the relationship between sculpture and film through the exploration of Neo-Realist films.

In 2008, a Cocheme Residency at the Byam Shaw School of Art (University of the Arts London) enabled a research project entitled 'Is Spiritualism A Fraud?' which explored the relationship between early forms of illusion in film and theatre, place and object. From this research the Henry Moore Foundation funded an ambitious installation called The Lonely House (2008), part of which was purchased by the Arts Council Collection England. The Lonely House is based on motifs taken from the last films to be shown in the cinemas of Archway, North London, before they closed down. Kavanagh created an installation on the top floor of an empty office block that now stands on the former site of one of these 'lost' cinemas, The Electric Palace, whose final film was The Lonely House (1957). Constructed from old metal office cupboards from the installation site, these scarred objects are cut and scored by hand to make an installation that resembles a partially dismantled film set. The artwork is stitched together with string and pins that allow the scenes to balance between real and imagined space. Measuring 18ft x 6ft x 15ft the viewer is able to walk within this structure. In each of the six rooms in this artwork, important elements are used from the final films screened; a glass tipped over spilling its contents, a view through a set of blinds; an empty cigarette packet, a stairway, a cowboy and his horizon.

In 2009, an exhibition and residency was undertaken at the Irish Museum of Modern Art project space. The installation created was entitled Volta and presented the audience with a single white cage-like room within a room of the museum. Volta, measuring 280 cm x 280 cm x 205cm was a scaled down version of the gallery room it was shown in. Fabricated from metal cupboards that were previously used to store 35mm films at the Irish Film Institute, every sculptural element was cut, scored and re-formed by hand. Over the period of two weeks of this installation, important elements were introduced into the armature; a stairway leading nowhere, a lampshade with no light, a white paint brush, a pair of dancing shoes, an empty suitcase etc. These introduced elements, which acted as surrogate figures within the work, were based upon the first films shown at The Volta Cinema, Dublin when it opened in 1909. Owned by James Joyce, The Volta was the first dedicated cinema in Ireland and as such marks a significant cultural moment not only within Irish history, but also with literatures' relationship to cinema. Of the films shown at The Volta cinema when Joyce owned it there are only seventeen films still in existence, most notably those by Andre Deed. As a former employee of Georges Méliès, Deed utilized early special effects in combination with his stage acting experience to create films that draw out the comic potential of physical transformations of people and objects within the everyday world and explore the idea that identity is erased and transformed by 'ghosts' within the projected image. 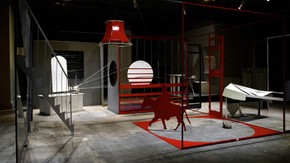 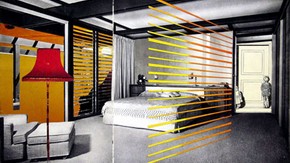 Automata can be classed under the term 'Magic Assemblage', a term that includes theatre, magic lanterns, cinema and shadow puppetry. This is an area in which entertainment shapes modern culture, rational and irrational thought overlap, and history and modernity meet. The creation of a 'mind space' which the audience can project themselves into and in which they can explore their identity is key to the way 'Magic Assemblage' functions. This is an area that has informed my work over the past few years. As a sculptor, I am interested in Automata as a material, object based language that can create this form of 'mind space'.

I am interested in relating specific objects from the V&A collections to a sense of people and place, memory and rituals. In doing so I intend to investigate the value that objects have as a means to express our cultural identity. Working with the Crafts Council will provide me with a rich resource on Automata and the associated visual languages that their collections holds. The progressive approach of both the V&A and the Crafts Council will enable me to develop Automata within a contemporary context.

Central to my project for this residency is the 'lost' Museum Cinema that once existed next to the V&A Museum of Childhood. The cinema was closed on the 1st December 1956. The last film shown there was 'I've Lived Before' (Dir. Richard Bartlett, 1956), which deals in its storyline with ideas of time travel and re-incarnation popular during the period. 'I've Lived Before' is also an example of the long standing relationship between film, science and altered states as a means to create a sense of alternate identities more vivid than factual memories. Using selected films that were shown at the Museum Cinema over its thirteen year life, I want to develop a line of enquiry that draws on the recurring themes of time, re-incarnation and the creation of identity through illusion to map out relationships between objects within the V&A collection.

Two of my recent projects 'Volta' (2009) and 'The Lonely House' (2008) have investigated cinematic architecture, location and memory in relation to material permanence in sculpture. The use of film in my work provides me with a framework from which to make three-dimensional spaces out of these flattened, constructed images where events all occur on top of one another. The resulting artworks resemble a partially dismantled film set of a domestic interior on the verge of collapsing within which the audience is able to walk around. In doing so, they become the main character in their own film, forming and re-forming their own storyline with the objects and spaces within the sculpture. The research undertaken during the making of these works dealt with the potential of images to transfer between people through space and objects, and explored how slippages between image and perception expose our will to believe in what has been and what can be. The work plays on a constant shift between the human desire for both past and future, whilst fixing these moments to a specific place.