The Age of the Mughals 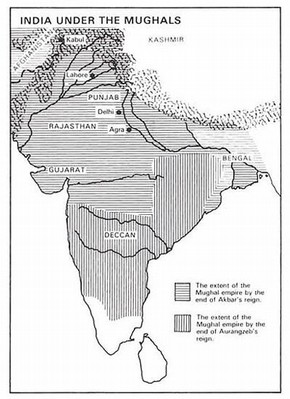 Map showing the areas of India under Mughal rule

The name Mughal or Moghul is a corruption of the Persian word for Mongol, the Central Asian tribe after whom Mongolia is named.

The Mughals originated in Central Asia, and were descended from the Mongol ruler Jenghiz Khan and Timur (Tamburlaine), the great conqueror of Asia. They were immensely proud of their pedigree, and it was the memory of Timur's raids on India in the fourteenth century that spurred Babur on to invade.

The great cities built by the Mughal emperors at Delhi, Agra and Lahore still retain something of the magnificence that was associated with the Mughal dynasty during the seventeenth century.

The major Mughal emperors were:

Babur, the first Mughal emperor, was born in present-day Uzbekistan, and became ruler of Kabul in Afghanistan. From there, he invaded the kingdom of the Lodi Afghans in northern India in 1526 and established a dynasty that was to rule for three centuries. Babur was a modest and down-to-earth man whose memoirs, the Baburnama, make fascinating reading.

Babur is not known to have patronised the arts, except for architecture. His son Humayun, however, is credited with bringing artists from Iran to set up the first Mughal painting studio.

Humayun's successor, Akbar , was actively interested in painting, and enthusiastically set up studios whichemployed mostly local Hindu artists. Mughal painting soon began to evolve in a distinctive way that combined the sophisticated techniques of the Persian artists with the boldness and colour characteristic of the local Indian artists.

Akbar was perhaps the greatest of the 'Great Mughals'. He vastly increased Mughal territory in all directions, capturing the Muslim kingdom of Bengal in the East, and Gujarat and the Rajput kingdoms in the West, as well as much of present-day Afghanistan and important territories to the South.

The defeat of the fiercely independent Hindu rajas, the kings of Rajasthan, was one of Akbar's main preoccupations. Paintings from the illustrated history of his reign - the Akbarnama - show battles, sieges and surrenders. Akbar's son Jahangir was less interested in further extending Mughal territory, and instead gloried in the luxury and riches that the great empire provided.

A true connoisseur of paintings and gems, and a great lover of nature, Jahangir commissioned many of the most beautiful miniatures and precious objects to have been produced in the royal workshops. Paintings no longer showed the glories of war and conquest that Akbar had revelled in, but instead focused on animals, birds and scenes of the leisurely life at court. 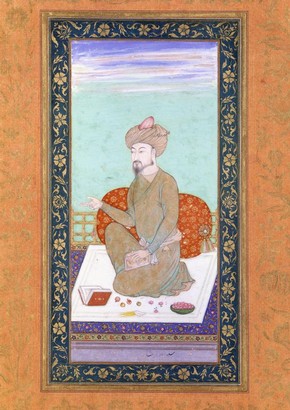 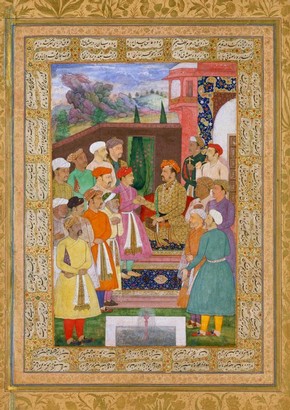 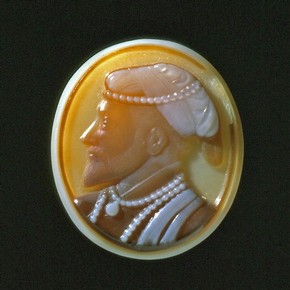 Magnificent paintings and works of art were also made for the next emperor, Shah Jahan, who is perhaps best known for building the exquisite Taj Mahal at Agra - a jewelled white marble tomb for his wife, who had died giving birth to their fourteenth child. His love of jewels and jade is well known, and several pieces from his collection are on show, including his magnificent white jade wine cup carved with a goat's head.

Shah Jahan was deposed and imprisoned by his ruthless son Aurangzeb. Aurangzeb was not interested in the arts but in further conquest, and he spent huge sums on military campaigns in the South. Painting and the decorative arts declined under his puritanical and impoverished regime, and many artists left the court and found work with provincial rulers instead.

Emperors after Aurangzeb became more and more ineffectual, and the empire was weakened first by rebel Hindu princes and then by the British, who were becoming increasingly powerful. The Mughal empire survived in name only until 1858, when the British formally abolished the title of Emperor.