The Man Booker Prize for Fiction is one of the leading literary awards in the English-speaking world. It brings instant fame and, to a greater or lesser extent, fortune, to the shortlisted and winning authors alike.

First awarded in 1969, the Booker Prize (as it was then called) was created as an English-language version of the French Prix Goncourt. By rewarding the best new novel of the year in Britain and the Commonwealth, its aim was to encourage the wider reading of the very best in fiction. The winner now receives £50,000 and the six shortlisted authors each receive £2500. All are guaranteed a worldwide readership as well as a significant, even dramatic increase in book sales. Hardly a year goes by without the judges' decision inspiring fierce debate and controversy. Yet each year's judging panel has maintained a reputation for excellence.

Normally six books are shortlisted for the Booker, but only one wins (apart from some years when two books shared the prize). The first editions are issued as hardbacks with dust jackets. These dust jackets are an integral and important part of book design. Their function is not so much the original one of protecting the binding as to provide information about the book and its writer, and to entice the public into buying.

Since 1991 the Booker Prize Foundation has commissioned bespoke bindings for all the shortlisted books. The bindings are executed by members of Designer Bookbinders, one of the foremost societies devoted to the craft of fine bookbinding.

Six Fellows are chosen each year for the task. They have only four to five weeks to read the novel and then to design and craft a binding inspired by the story and its mood. Their starting point is folded, printed sheets, which have to be cut and sewn together before they can be bound.

These bindings represent some of the finest achievements in contemporary bookbinding. Created to last for decades, if not centuries, they provide an interesting counterpoint to the mechanised bindings and printed dust jackets of today's commercial publishing. 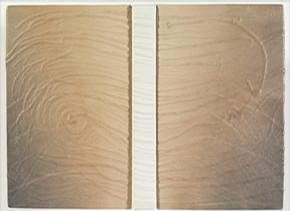 Bespoke binding by Faith Shannon for 'The Gathering' by Anne Enright. Published by Jonathan Cape.

The concept for the binding for Anne Enright's 'The Gathering' (winner 2007) came from the story of the intertwining threads that bound different members of the family featured in the book. Slate, sandstone, cream and oatmeal, often mentioned in the novel, suggested the colour theme. The hard ribbed spine represents the backbone of the family. The box that encases the bindingalludes to the coffin of the suicidal brother, and its padded lid has seven tiny buttons representing the mother's seven miscarriages.

Further information on the Man Booker bindings can be found on the Designer Bookbinders website.