Brass, Pewter & Cutlery in the Collections

Brass, Pewter & Cutlery in the Collections

Brass is an alloy or mixture of copper and zinc: 83% copper produces a golden lustre; 90% gives a reddish glow. Brass melts at 850ºC and can be cast into patterned moulds or into sheets which are hammered into shape. Brass is a versatile material. Candlesticks and durable basins show it as an industrial metal marketed for a range of mass-produced items. Exquisitely engraved tobacco boxes and Arts and Crafts bowls reveal brass as an 'art' metal.

Before 1600, European brass manufacture flourished in Nuremberg, whose councils protected local trade zealously. Venice was the centre of trade with Muslim countries to the east, whose decorative styles influenced Italian engravers. In England the industry developed slowly until 1700, when new foundries in Birmingham and Bristol rapidly expanded brass manufacture.

The V&A's brass collection covers a wide range of dates and styles - from medieval water jugs with lion-head spouts to sleek warming dishes of the early 20th century. The market for brass was large. It included mass-produced goods, lighting for middle-class houses and clocks for the aristocracy.

Most brass items were not for display, but were functional. People used brass fireguards, soap containers and tobacco boxes in their homes. Brass candlesticks and holy-water buckets played their part in church services.

The Museum has collected brass since its earliest days. Two of the collection's strengths are its candlesticks, reflecting 350 years of changes in style across Europe, and the dishes, which illustrate the great traditions of basin-beating in Germany and engraving in Italy.

Pewter is an alloy or mixture of metals consisting primarily of tin. Adding metals such as copper and antimony makes pewter harder and more durable. The best alloys contain over 90% tin. Before 1800 lead was allowed in 'lay metal', a lower-quality alloy used for measures and boxes. Soft lead made casting easier, but was poisonous, so it was forbidden in 'flatware' such as plates, dishes and porringers. Tests do reveal small amounts of up to 2%. Modern pewter contains no lead.

Pewter's low melting point makes it suitable for casting, though early casting moulds were expensive. Elaborate French and German buffet dishes of the 1580s show mould-making and casting at its most skilled. Pewter's softness makes it ideal for engraving.

From 1300 to 1800, pewter was as familiar as china is today. The Cornish tin mines were the largest in Europe. British pewter peaked between 1650 and 1700. It declined as ceramics, brass and silver plate grew more popular. The Arts and Crafts movement revived pewter around 1900, using traditional manufacturing techniques.

Much of the V&A collection shows signs of having been well used in the places which touched most people's lives: home, tavern and church. Elaborate display pieces commemorating royal events survive in better condition, as do the magnificent cups and flagons used in guild ceremonies. The collection's diversity allows us to trace the history of pewter styles from 1500 to the present day.

The Museum bought European pewter as early as the 1850s. An interest in English pewter grew after 1900 and increased with the foundation of the Pewter Society in 1918. Large bequests from Colonel Croft Lyons in 1926 and Alfred Yeates in 1945 added over 700 metalwork objects to the collection. Croft Lyons was an avid collector. Many of his personal labels recording where and when he bought items are still stuck to the objects. 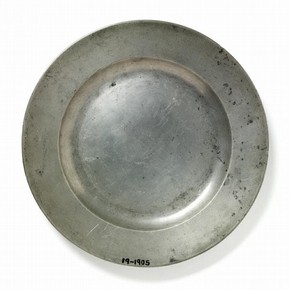 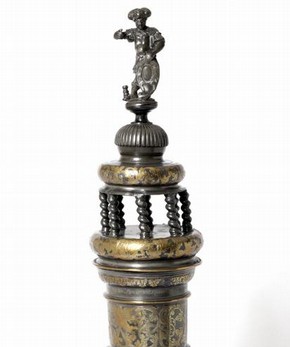 Pewter quality control
In England the Worshipful Company of Pewterers was established in 1478 to take control of the expanding pewter trade. On completing an apprenticeship, pewterers were required to register a 'touchmark' to be stamped on their wares, which had to meet set standards of quality. Inspectors or 'searchers' from the Company travelled around England visiting workshops and testing items. Substandard wares, often containing too much lead, incurred fines and were liable to destruction.

This cast pewter plate was made in London, England and dated 1751. It bears the maker's touch of Samuel Jefferys (active from 1735) and is stamped 'Holborn London', 'SUPERFINE HARD METAL and 'Owner's crowned initials 'HIE'.

Of all the marks on this dish, only the maker's touch of Samuel Jefferys carried official weight. The Worshipful Company of Pewterers allowed Jefferys to register his mark in 1735, recognising that he had completed his apprenticeship and was free to trade. The 'SUPERFINE HARD METAL' mark was a convention Jefferys adopted to advertise the quality of his wares.

This cast pewter welcome cup is inlaid with brass. Made in Lübeck, Germany, and dated 1717, it is inscribed in German 'This is the Welcome [cup] of all Honorable pewter founder journeymen Anno June 24, 1717.' and 'Drink and be Merry is all well and good, but remember that we are all united.' Welcome cups were displayed on buffets at civic dinners. This cup was made for the Pewterers' Journeymen's Guild of Lübeck. After their apprenticeships, German pewterers had to embark on a further seven to nine years as journeymen, before they could become masters. They travelled abroad to enhance their skills and acquire new designs. Journeymen's guilds looked after their interests and regulated their behaviour.

Cutlers specialised in making blades. They trained as apprentices for up to seven years, working for a freemen cutlers who housed and fed them. In England, a cutler would have to prove himself as bladesmith and hafter (maker of handles) in order to obtain the freedom of the Worshipful Company of Cutlers, gain his own mark and set up his own business.

Many cutlers acted as middlemen who bought blades from bladesmiths, handles from hafters and sheaths from sheathers. They assembled the cutlery themselves and sold them under their own names.

Surviving inventories, cutlers' marks, tradecards and bills reveal that cutlers did not only make table cutlery. Among their other creations were pocket and pen knives, scriveners' knives, hunting knives, scissors, razors, nutcrackers, swords and even surgeons' instruments.

Ebony, ivory, fish skin, tortoiseshell, amber, bone, horn and shell were popular for decorating cutlery. Around 1730 ceramic handles were introduced to Europe from China. Although cutlers were required by their guilds to be able to make a complete knife, handles of carved ivory, silver, bronze and glass were usually imported or made by specialist craftsmen.