British Watercolours 1750-1900: The Watercolour Societies of the 19th Century 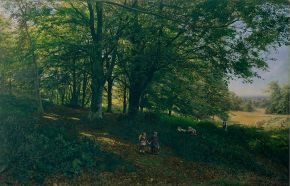 'Rest in the Cool and Shady Wood', by Edmund George Warren, 1861, watercolour. Exhibited at the New Society of Painters in Watercolours in 1861. Museum no.1212-1886, © Victoria and Albert Museum, London

The establishment of exhibition societies was one of the great innovations in artistic life in 18th-century Britain. The Society of Artists opened in 1760 and the Royal Academy held its first exhibition in 1769. Watercolours at these early exhibitions were exhibited as 'drawings' which had been 'stained' or 'tinted'.

But exhibiting in close proximity to oil paintings spurred watercolour artists to experiment with both the medium and their subject matter. Their bread-and-butter work remained commissions from publishers of topographical engravings and from private patrons, as well as teaching drawing and watercolour. But the exhibitions gave watercolourists a forum in which to demonstrate their own vision, to explore the medium without having to allow for its translation into print, to focus on their own artistic ambitions rather than those of their wealthy pupils.

In 1804 a group of watercolour artists formed their own exhibiting society, the Society of Painters in Water-Colours. They were anxious that the 'novel' term 'painters' in watercolour 'might...be considered by the world of taste to savour of assumption'. But although worried that oil painters would not accept them equally as 'painters', they were determined 'give [watercolour] …a fairer ground of appreciation than when mixed with pictures in oil'. Many predicted a short life for the society, but by the 1830s the society was in competition with a number of equally successful societies.

Many early 19th century landscape watercolour artists were members of the various watercolour societies; John Varley was a founder member of the first society, and David Cox was President of the Associated Artists in Water-Colour. Indeed, one complaint about the first watercolour exhibitions was that because landscape was the dominant subject matter, the 'sensations induced in the spectator' were 'similar to those of an outside passenger on a mail-coach making a picturesque …journey'.

Samuel Shelley: a founder member of the first Watercolour Society 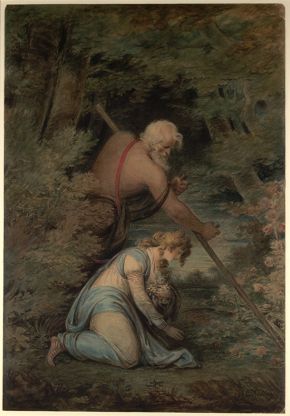 'Memory gathering the Flowers mowed down by Time', by Samuel Shelley, 1805, watercolour. Museum no. 1754-1871, © Victoria and Albert Museum, London

Samuel Shelley was a miniature painter by training and practice, painting portraits in watercolour on ivory which could be mounted and worn as jewellery. Shelley was a founder member of the first watercolour society which held its opening exhibition in 1805. Before this date, watercolour artists had exhibited at the Society of Artists or the Royal Academy. But many believed that their work showed at a disadvantage when compared to oil paintings, which were more numerous, larger and more highly coloured.

Shelley's ambition was to compete with the oil painters, particularly those who worked in the prestigious field of history painting. He began to paint small subject pictures in watercolour on ivory, such as 'Macbeth saluted by the Witches', adding more gum to his watercolour to give it the gloss and richness of oil. He sometimes used this technique in his more complex portrait miniatures.

At the Watercolour Society's exhibitions he displayed his subject pictures on ivory alongside the works on paper by his fellow watercolourists, most of whom were landscape painters. Nonetheless he hoped his works would appear to greater advangage when displayed separately from oils. Interestingly at the first exhibition he showed 'Memory gathering the Flowers mowed down by Time', a rare example of a watercolour by Shelley on paper, rather than ivory, and of an unusually large scale.

Although many critics complained that the Royal Academy was dominated by portraits, and the first Watercolour Society by landscapes, Shelley's subject pictures were an early indication of how the watercolour exhibiting societies would encourage a flowering of subject matter for watercolour. 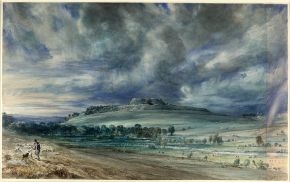 It is not possible in a website to demonstrate the full impact of the watercolour exhibitions, especially in the matter of size. Many exhibition watercolours were surprisingly large, such as 'Rest in the Cool and Shady Wood' by Edmund George Warren, which is nearly four feet long (120 cm). It is painted in painstaking touches of gummy, glossy watercolour, so that at a first glance it appears to be an oil painting. It is also framed in a wide ornate gilt frame, as were many exhibition watercolours. This watercolour is an extreme example of the pressure some artists felt to be noticed by the public and the critics, to create a sensation; and Warren's huge watercolour was a sensation at the 1861 exhibition of the New Society of Painters in Water colours. The Spectator wrote, 'It is large in size, and must have occupied the painter some time, so full is it of detail'. Another commentator, J. B. Atkinson, called it a 'prodigy of manual skill'.

Many exhibition watercolours had the same intricately worked, even jewel-like quality, which would have been set off by the gold of a gilt frame.