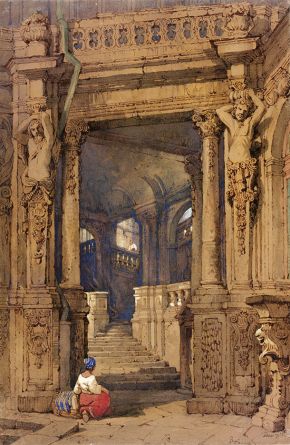 'Entrance to the Zwinger', by Samuel Prout, watercolour. Museum no. 3055-1876, © Victoria and Albert Museum, London

Architectural topography had its roots in the antiquarian study of buildings of historical interest. A number of architectural painters were in fact first trained as architects but their carefully delineated views increasingly found a wider market among those curious about places unknown to them, or those who enjoyed the already familiar and well loved.

These watercolours are by artists noted for their skill in painting buildings. Samuel Prout established a niche within the architectural market, with picturesque views of continental buildings, such as the 'Entrance to the Zwinger, Dresden'. Prout first visited Europe in 1819, a few years after Napoleon's defeat opened Europe once more to British travellers. Much as tourists today photograph views of quaint streets, market places and old churches, so Prout beautifully observed records of such 'sights'.

Peter De Wint had been apprenticed to J R Smith, for whom Girtin and Turner had also worked, and made one visit to Normandy in 1828. But he was disappointed, and thereafter concentrated on the English scene and especially Lincolnshire. The cathedral city of Lincoln particularly appealed with its mixture of mellow, warm colours, red bricks and weather beaten grey and yellow stone, as seen in his view of 'Potter Gate'. Walter Paris' 'Court in the Abbey of Mont St. Michel' and George Price Boyce's 'Catterlen Hall, Cumberland' show the influence of John Ruskin and the Pre-Raphaelites in their attention to detail.

Boyce was trained as an architect, but his minute, painstaking style has less to do with architectural draughtsmanship than with his friendship with the Pre-Raphaelites. Photography was well established when Boyce painted this watercolour. But although he carefully delineated the different materials used in the building, the variety of surfaces, he has not sacrificed atmosphere for photographic detail. Like Albert Goodwin in his view of 'Allington Castle' Boyce's images are bathed with the air of a summer's afternoon, with the warmth of the light on stone. 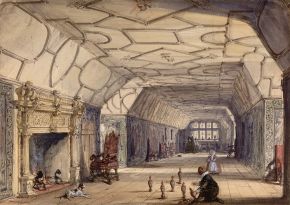 Architectural topography continued to be a popular subject for watercolour artists. But the taste for romantic historical works encouraged from 1814 by the historical novels of Sir Walter Scott, led many artists to take a new approach to views of historic houses.

'have taught all men this truth ... that the bygone ages of the world were actually filled with living men, not by protocols, state papers, controversies and abstractions of men'.

A number of notable artists, including Joseph Nash, worked in this spirit, peopling their views of historic houses with imagined figures from the past. 'Speke Hall, Lancashire' and 'The Gallery, Knole House' are typical of these watercolours of architecture animated by the artists imagination.

Joseph Nash was the pupil of the architectural draughtsman Augustus Pugin who took him to Paris to make drawings for his Paris and its Environs, published in 1830. Nash's most notable series of watercolours were published as 'Mansions of England in the Old Time'. It is unsurprising that Nash not only worked as an architectural draughtsman but like Sir John Gilbert painted subjects taken from Shakespeare, Scott, and Cervantes. 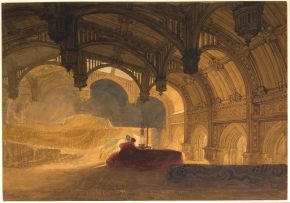 John Sell Cotman's watercolour of the 'Interior of Crosby Hall' is less literal in its evocation of the past. The late medieval merchant's house, Crosby Hall, was located on Bishopsgate Street in London. Its rich historical associations doubtless appealed to Cotman's romantic sense of the past. It was also a subject redolent of melancholy and neglect, for when Cotman saw it, the hall

'though one of the most elegant specimens of ancient domestic architecture in England; the residence of princes, and the theatre of great and interesting transactions [was] … converted into a common warehouse'.

In 1831 it was 'greatly mutilated, and obscured by bales of goods', leaving the highly ornamented timber-work of the roof as the single dominant visible feature. Unlike Nash, Cotman has not peopled this shell of a building with characters from an imaginative past, but lets the building itself speak for its past. The pair of scales on the tabletop and the goods covered in cloth are poignant signs of the mercantile use of the Hall that Cotman witnessed.