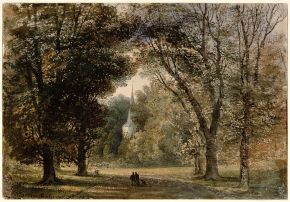 From the middle of the 18th century a number of British writers sought to define and categorise human responses to natural phenomena, most notably Edmund Burke with his exploration of the 'sublime' and the 'beautiful', and William Gilpin and his theory of the 'picturesque'.

Landscape painting in Britain was affected both directly and indirectly by such theories, and the development of certain subjects in the late 18th century suggest their influence. These four themed groups of watercolours loosely reflect both 18th century aesthetic theory and artistic practice; Italy, Ruins, Mountains, and Cottages & Churches.

In the 18th century British patrons found Italy a particularly appropriate subject, the playground of Grand Tourists in search of a classical past. British patrons also came to see paintings of ruins - especially abbeys overgrown with ivy - through the eyes of William Gilpin, and his Picturesque theory. But some subjects which today seem eminently suited to landscape painting, such as towering mountains, were thought in the early 18th century to be uninteresting or even unpleasant. Scenes of humble cottages nestled around a parish church, which today seem almost a cliché of British landscape art, were once seen as unseemly. Only gradually did such subjects became the staples of the landscape painter's art.

Each of the four groups includes work by both 18th and 19th century painters. But no chronological progress is implied and each group aims primarily to compare and contrast the approach of different artists, at different times to similar themes. 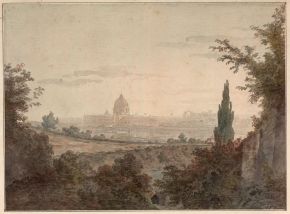 For many 18th century British artists Italy was a land of inspiration - with its classical remains and Renaissance art and architecture. For British patrons, the Italian landscape was often imagined through the golden glow of the 17th century paintings by Claude Lorraine, evocations of a sun-drenched distant classical past.

Before the invention of photography in the 1830s, some artists were sponsored by wealthy gentlemen on the Grand Tour to record sites of personal interest to their patron. J. R. Cozens painted many sites such as the 'Temples at Paestum' for the wealthy William Beckford. Beckford himself in fact found the noise, heat and pollution of modern Rome unbearable and envied his friends back in the 'vernal delight' of England. Cozens watercolour of the garden of the 'Villa Pamphili', records a rare part of Rome in which Beckford found sanctuary, peace and shade.

William Pars was a more typical 18th-century topographical painter who supported himself in Italy by providing watercolours for publication as prints. He settled in Rome in 1775 where he painted views such as 'St Peter's Rome:View from above the Arco Scuro, near Pope Julius' Villa'. But as patrons began to appreciate British landscape paintings, there was less need for landscape artists to travel to Italy; John Constable famously never left Britain.

Nonetheless, something of Claude's vision continued to affect British artists in Italy. Samuel Palmer wrote, 'You can only look at dazzling palaces, blazing in Italian sunshine, with your eyes half shut. Indeed, Italian air and Italian light, and the azure of an Italian sky can scarcely be imagined in England'. This image of Italy is captured by his bright, colourful vision of 'The Villa d'Este', though in reality it rained for much of his visit to Italy in 1837.

Andrew Donaldson, later a painter of historical and religious subjects, visited Italy in 1864 as a serious student of classical sculpture and Renaissance painting. However, his delightful landscape of the 'Villa Borghese, Rome' shows that the Italian landscape continued to enchant, and could seduce artists away from their other studies. 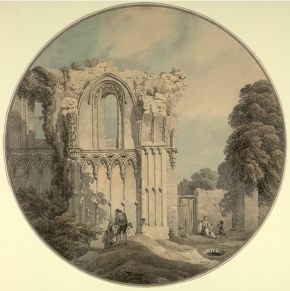 Ruins were originally of interest mainly to antiquarians, and the Antiquarian Society which formed in the early 18th century, employed a number of artists to record notable sites. Michael Angelo Rooker in particular specialised in views such as 'Part of the North Wall of St Joseph's Chapel, Glastonbury Abbey', and many of his works were reproduced as prints.

Ruins gained a new currency in the late 18th century as a subject for landscape painting through William Gilpin's 'Picturesque Tours', published from 1782. According to Gilpin, ruins were 'useful' in a landscape because their broken lines - enhanced by moss, ivy, a wall topped with twisting bushes - provided variety' through irregularity, which delighted the eye.

Inevitably the popularity of Gilpin's 'grammar' of landscapes led to satire, as in William Combe's 'Tours of Dr Syntax in Search of the Picturesque', illustrated by Thomas Rowlandson. Despite such satire, Rowlandson's unfinished view of 'Netley Abbey' shows that ruins might independently appeal to the eye of an artist. It is a very simple image, with neither the architectural detail of interest to antiquarians, nor the 'picturesque variety' which Gilpin felt justified the place of a ruin in a landscape.

Thomas Girtin, along with his friend J M W Turner, brought to the topographical description of ruins a grandeur that went beyond either architectural or picturesque detail. Both Girtin and Turner were trained in the tradition of architectural topography of M A Rooker, but painted watercolours with a ground-breaking breadth of vision.

To many of their generation ruins were melancholy remains of a lost age of faith. Girtin evoked this romantic mood, without losing sight of the architecture of a building. His distant but atmospheric view of 'Kirkstall Abbey - Evening', compares interestingly with Rowlandson's more prosaic view of 'Netley'. William Callow was working half a century after Girtin's death, when romantic images of ruined abbeys had become wearyingly familiar. Callow's image of 'Easby Abbey' is therefore notable for its strong, distinctive quality, the sense of drama in his choice of angle, and the solidity of his crisp, bright colours. 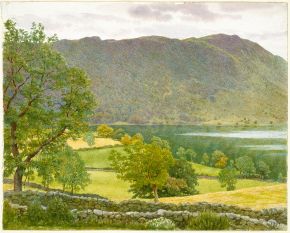 Paul Sandby's 'Landscape with Mountains' is a peaceful image of a man contemplating a mountainous landscape. It is in marked contrast to the distaste of previous generations, for whom mountains were lumpen, dangerous obstructions. Writing in the 1720s, a surveyor, Captain Birt, called mountains 'monstrous excrescences...rude and offensive to the sight'. The British first became accustomed to paintings of mountainous scenery through the popular dramatic work of the 17th century Italian Salvator Rosa. Horace Walpole famously wrote of his journey over the Alps in the 1730s, 'Precipices, mountains, torrents, wolves, rumblings, Salvator Rosa'.

Later, Edmund Burke, in 'A Philosophical Inquiry Into The Origin Of Our Ideas Of The Sublime & Beautiful', published in 1757, sought to explain the sense of awe, of God's presence, that many experienced with 'sublime' natural phenomena such as mountains; why in the words of the poet Thomas Grey, the Alps were 'pregnant with religion and poetry'. A further aesthetic treatise, by Alexander Cozens, strongly associated mountains with 'surprise, terror, superstition, silence, melancholy, power, strength.' His son, J R Cozens, in his 'View in the Island of Elba' sought to capture the enormity of such scenery and its power to stimulate such emotions.

His vision is quite unlike that of his idiosyncratic contemporary Francis Towne in his view of 'Rydal Water' in the Lake District. Towne's technique is 18th century - neat pen outlines and flat washes of muted colour - but the effect seems modern in its abstract geometry. Henry Holiday noted the 'architectural dignity of line' found in Lake District, but in contrast to Towne, Holiday represented this quality in 'Hawes Water' using tiny, dense touches of watercolour, creating a highly coloured, controlled image. Such precision and detail is also found in the 'View of Rhodes' by Richard Dadd painted on his tour of Greece in 1842.

The two views by John Varley and John Constable are also very different from each other, despite being almost contemporary in date. Varley's 'Afterglow' is typical of those paintings he simply called 'View' or 'Composition'; an early example of Varley's interest in formal rules of design which he later set down in his published treatises. Constable's view of 'Borrowdale, towards Glaramara' records his one visit to the Lake District in 1806. He found this wild inhospitable landscape unsympathetic, an emotion which seems apparent in his glowering, rough sketches. 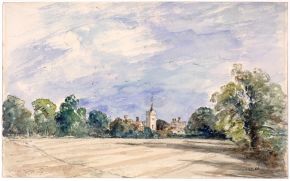 It was Gainsborough's 'Cottage Door' scenes which particularly appealed to patrons, with their attractive peasants gathered round a cottage door, deep within a wooded glade; an English echo of the classical poetic tradition of a retired life in the country. The poet, Oliver Goldsmith, echoed this nostalgia in the 'Deserted Village', his lament of 1770 for a fading way of life, 'The shelter'd cot [cottage] ... the decent church that topt the neighbouring hill'.

Today cottages seem almost a pictorial cliché. But William Gilpin, whose theory of the 'picturesque' was so influential, wrote to his friend Mary Hartley, 'nothing can reconcile me to a cottage', which 'offends' and lacks 'dignity'. Mary Hartley's reply shows how Gainsborough's images rendered English rustic landscapes acceptable; 'after having had my mind raised ... by the sublime views of rocks and torrents ... I shou'd like ... to compose my imagination with a softer scene; where a little straw-roofed cottage shou'd peep out from behind an old hollow oak'.

C R Leslie wrote of his friend John Constable, 'I have heard him say the solitude of mountains oppressed his spirits. His nature was peculiarly social and could not feel satisfied with scenery ... that did not abound in human associations. He required villages, churches, farm-houses and cottages.' Constable's view of 'A Village seen over a ploughed Field' seems to epitomise this life-long love.

Thomas Rowlandson, caricaturist and observer of human life, also favoured landscape replete with 'human association'. His view of a village 'Near Helston, Cornwall', puts the viewer at the heart of the village with its cottages and church. Though this is quite unlike the distant viewpoint of Peter de Wint's 'View from Gore Lane, Kensington, showing Holy Trinity Church, Brompton', the sight of a steeple or distant rooftops, signs of the life of a community, invariably have an emotional frisson. John Martin shows this in his gentle image of 'Stanmer Church'. This homely view of man is very different from Martin's famous apocalyptic oil paintings, which depict the destruction of man and all his works by forces beyond his control.