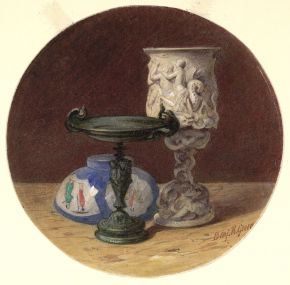 Still life, the depiction of inanimate objects such as fruit, vegetables, dead game and household objects, became a popular subject for watercolour artists. Still lives appealed to patrons for the simplicity of their subject matter, and were admired above all for the skill of the artist.

'Rabbits' by John Sherrin is not strictly speaking a 'still life'. But Sherrin has treated the live rabbits as static objects, inviting us to view them closely, to wonder at the fineness of the brushwork delineating every hair of the rabbit, rather than stepping back to admire an overall concept and composition.

In order to achieve such detail, as well as the high colour typical of Victorian still lives, watercolour painters developed new techniques which were often disapproved of by contemporaries. The critic John Ruskin noted that Sherrin's teacher, William Henry Hunt, could not have obtained his colours by using direct washes of pigment - no blue by itself could render the rich colour of, for example, a violet or a plum.

Indeed, Hunt worked on a white ground of pigment, overlaying it with broken colour, with detached and sharply defined touches and with patches of pure colour. We can see this in 'Grapes, a Melon and Plums' , which is typical of Hunt's still life style. Mounted and framed in gold these images were amazingly vibrant, complimenting and enhancing the rich, cluttered Victorian interior.

Many artists such as Hunt and Sherrin specialised in still life. For others, still life was simply part of a repertoire of subjects by which an artist could make a living. Benjamin Richard Green painted figure and architectural subjects, portraits, landscapes and interiors, as well as still lives such as 'Still Life with Vases' and 'Still Life with Statuette and Jar'.

For other artists, still life presented an interesting technical challenge. Peter De Wint was a renowned landscape painter specialising in views in his native Lincolnshire. De Wint's 'Still Life. A Wicker Basket containing a Bottle and two Brown Vessels' and 'Still Life. A Barrel, Jug, Bottle, Basin etc on a Table', are unusual in his work. 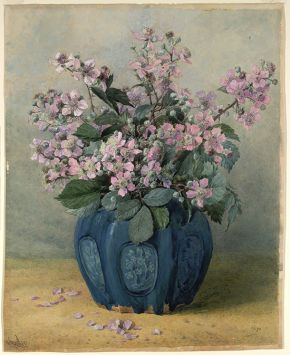 The Victorian taste for realism and detail meant that still life, the depiction of inanimate objects, was a popular subject. The leading still life painter of this period was William Henry Hunt, known as 'Bird's Nest Hunt' because nests commonly featured in his paintings, as seen in 'Hawthorn Blossoms and Bird's Nest'.

It is interesting that Hunt specialised in still life because of a physical infirmity that restricted his freedom to move around the countryside and sketch at will. Many women similarly focussed on still life because of restrictions, though these were social rather than physical. Elizabeth Ellet, writing in 1859, explained why media such as watercolour and subjects such as still life and flowers were particularly suited to women; 'such occupations might be pursued in the strict seclusion of home, to which custom and public sentiment assigns the fair student.

Gaining access to professional training was hard for women and it was also unacceptable for them to study the human figure in the life class. It is notable that many professional women artists were the daughter or sister of a trained artist, and that they effectively learned their profession in the home.

It is not surprising therefore that most watercolours by Victorian women in the collection of the V&A are of flowers. But it should also be noted that the Victorians genuinely had a strong aesthetic appreciation of still life and flower painting. In a surprisingly modern appraisal of a drawing of a mug by Hunt, the critic John Ruskin noted 'The whole art of painting is in that mug...If you can feel how beautiful it is, how ethereal, how heathery and heavenly, as well as to the uttermost muggy...'.

We know almost nothing about Mary Butler who painted 'Blackberry Blossom', but it was acquired by the museum in 1878 in the middle of her successful career as a flower painter. Butler exhibited at the Royal Academy for over 25 years, from 1867 to 1893. 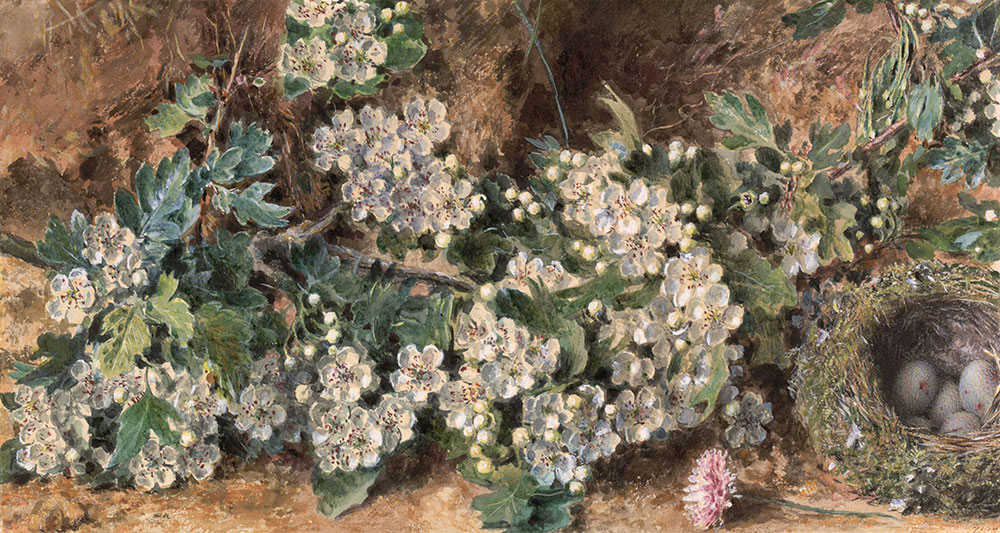