British Watercolours 1750-1900: Travels in Europe and the Middle East 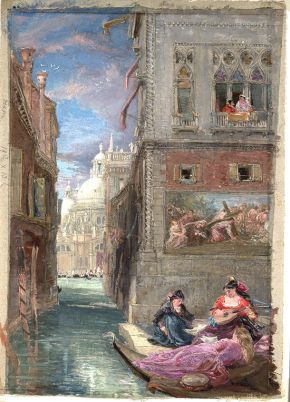 'Canal at Venice with a group of ladies playing and singing: Santa Maria della Salute in the background', by James Holland, watercolour. Museum no. 1147-1886, © Victoria and Albert Museum, London

In 1815 Napolean's final defeat opened Europe to safe travel after nearly 20 years of turmoil. John Sell Cotman, an antiquarian architectural draughtsman, was sent to Normandy in 1817 to make etchings of Norman and Gothic architecture. Cotman captured his delight at such new sights in both word and image; of 'Dieppe Harbour' he wrote,

'Everything is picturesque. Women, men, horse, mules and carriages, with such attire...the harbour is like a lake filled with vessels - and such colouring ... Nothing even as to the colour can be seen in England like it.'

Richard Parkes Bonington actually moved with his family in 1817 to Calais, where his father set up a lace business. Bonington caused a sensation in French artistic circles with his watercolours and his exceptional technique was summed up by the artist Eugène Delacroix:

'no one in the modern school… possessed the ease of execution…by which the eye is pleased and fascinated, quite independently of the subject'; as can be seen in 'Corso Sant'Anastasia, Verona'.

After the Napoleonic wars, Britain's growing commercial prosperity produced a new class of tourists - businessmen, professionals, writers - who, like Cotman, were fascinated by the life and colour of contemporary foreign scenes. Artists such as James Holland found a ready market for their watercolours at the new watercolour exhibitions, where buyers could choose off-the-wall pictures that evoked memories of their travels; 'Canal in Venice', shows a particularly colourful and exotic Venice glittering in the sun. Holland also found employment through the new vogue for 'Annuals'.

In the 1820s improvements in steel engraving meant that one engraved plate could produce many prints, and it became commercially viable to produce illustrated magazines such as the Landscape Annual, for which Holland worked. 'Moorish Castle, Mafra', was probably intended for reproduction, its muted colour and clean lines making it well suited to translation into print.

William Callow also specialised in picturesque travellers' views, especially of European buildings such as 'Old Houses, Berncastel, on the Moselle'. While Frank Dillon, who had studied under James Holland, travelled not only in Italy and Spain, but also Egypt and Japan. 'Reception room, Cairo' is typical of the glimpses he offered his countrymen of strange exotic worlds. But for some artists, such as Edward Lear, travel to places such as 'Corfu' was driven by passion not the insatiable demands of the market. When Lear died, he left more than ten thousand sketches.

Genre painting and the Middle East 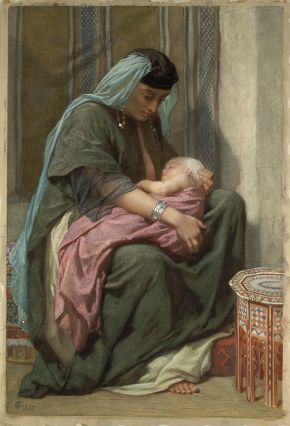 In the early 19th century more artists took advantage of the opportunities for foreign travel, exploring new subjects in the landscape and cultures of other countries. Egypt particularly fascinated British artists, with its striking landscape, its Biblical associations and the appeal of the exotic fostered by the Arabian Nights.

Antiquarian artists had visited the area to paint ancient sites, but increasingly the life of the country itself, rather than relics of a past life became the focus. John Frederick Lewis went to Egypt in 1841 and lived there for ten years. When the Old Watercolour Society threatened him with expulsion in 1851 if he failed to exhibit after a ten year absence, he created a sensation by exhibiting for the first time one of his Egyptian scenes, the so-called 'Hhareem' (a reduced version of this is in the V&A, P.1-1949).

Knowledge about modern Egypt had been greatly increased by E. W. Lane's Manners and Customs of the Modern Egyptians (1836), which emphasised the realities of Islamic life. Lewis's painting of an 'Interior of a Cairo school' has something of this authenticity. But Lewis's paintings appealed to Victorian audiences for the same exotic qualities he cultivated in his own life. The writer W M Thackeray described meeting Lewis in Egypt; 'he rides a grey horse...and has two servants to walk beside him. He wears ... an embroidered jacket ... and a pair of trousers, which would make a set of dresses for an English family. His beard curls nobly over his chest, his Damascus scimitar over his thigh. His red cap gives him a venerable and Bey-like appearance'.

Lewis's minute, jewel-like technique detailed the richness of this unfamiliar culture, and captured particularly the intensity of light, filtered through panelling and lattice work. It was an effect echoed in the beautiful 'Copt Mother and Child' by Frederick Goodall. From 1858 to 1859 Goodall spent eight months in Egypt, and returned in 1870. His image of a Christian Egyptian woman and her child is more a portrait than a genre painting with its close-up viewpoint. But the interest for Goodall's British audience lay in the glimpse it offered into another's way of life. 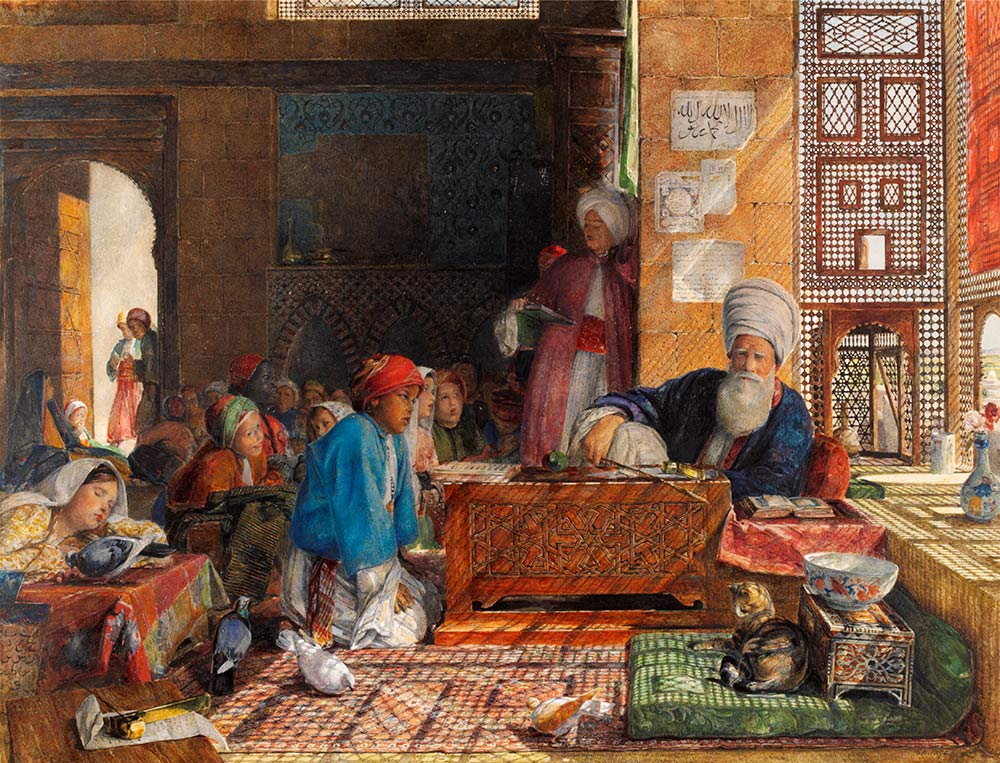