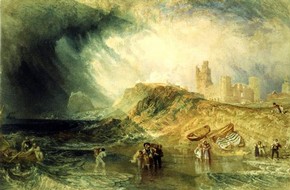 The critic John Ruskin wrote of J.M.W. Turner, 'there were two men associated with Turner in early study, who showed high promise, Cozens and Girtin, and there is no saying what these men might have done had they lived'. J R Cozens died in 1797, Thomas Girtin in 1802. Turner however died in 1851 after a long career characterised by exploration, invention and controversy.

Unlike his contemporary John Constable, he regularly exhibited watercolour paintings, such as 'Holy Island', as well as oils. Most criticism however was reserved for his oils. The critic William Hazlitt commented that Turner's 'pictures are...too much abstractions of aerial perspective, and representations not properly of the objects of nature as of the medium through which they are seen...they are pictures of the elements of air, earth and water'. Many such comments are equally applicable to Turner's watercolours.

Turner was less concerned with painting specific places than with the dramatic possibilities of sea and air, and with the motion of the elements. Light was his theme as seenbelow in two of his so-called 'colour-beginnings', 'Study of Sunlight' and 'Study of Sea: Stormy Sky' - studies of colour and light. The diarist Joseph Farington noted that 'Turner has no settled process but drives the colours about'. In fact unlike such watercolour studies, his finished watercolours are quite detailed, the impression of breadth and atmosphere carefully created.

John Constable initially disliked Turner's work but later called his paintings 'golden visions, glorious and beautiful; they are only visions but still they are art, and one could live or die with such paintings'. 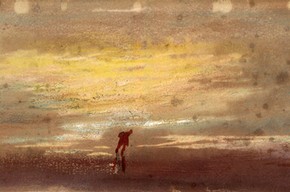 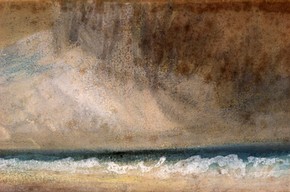 Ruskin's view of landscape can be seen particularly in his criticism of his drawing master, the artist J D Harding, who showed 'no depth of science...if the forms of the subject were picturesque, it was all he cared ... I did not mind his laughing at me for poring into the foreground weeds, which he thought sufficiently expressed by a zigzag...'

One of Ruskin's own illustrations for Modern Painters is notably a close-up detail of the foreground of one of Turner's watercolours. H A Bowler's 'Lucoombe Chine, Isle of Wight' similarly reflects this aesthetic in its concentration on what once might have been considered mere foreground detail.

Equally telling was Ruskin's criticism of 'the dash of [David] Cox' and 'the blot of [Peter] de Wint', two leading early 19th century landscape painters who were as concerned with the craft of painting as with their ostensible subject matter. In contrast Ruskin was fascinated by the scientific study, for example, of geology. Samuel Palmer's exhibition watercolour 'The Furze Field', in true Ruskinian manner concentrates closely on the detail of a non-descript field. Interestingly however, Palmer's son once defended his father against the charge of being overly concerned with such details, noting that 'although keenly and vigilantly observant of so many natural phenomena, my father ... could not have passed the most absurdly elementary examination in botany, entomology, ornithology or geology.'

Myles Birket Foster and Helen Allingham, both illustrators, were more subjective and sentimental than objective in their choice of subject matter; pretty milkmaids and children playing near picturesque cottages. But the influence of Ruskin's ideas and more especially of the Pre-Raphaelites can be seen in their detailed technique, carefully building the image with tiny touches of paint. This is particularly so in Foster's 'A Dell in Devonshire' and in Allingham's, both of which avoid their usual focus on sentimental content.