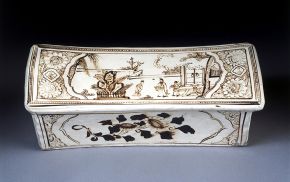 The custom of burying grave goods with dead bodies lasted a long time, so the artefacts that remain range from Neolithic times (about 5000 BC) to the end of the Ming dynasty (1644). Inevitably, most of them come from the graves of the few with wealth and power; the lives of most people passed into history unrecorded. Elements of this ancient custom live on today in the practice of burning paper representation of luxury goods at Chinese funerals.

Master Cheng (1033 - 1107) said, 'Divining a tomb site is aimed at discovering the excellence of the land….When the land is excellent, the spirits will be comfortable and the descendants will flourish; the principle is the same as the branches and leaves of a plant flourishing when earth is banked around the roots. When the land is bad the contrary occurs. But what is meant by excellence of land? It is land that is bright and moist; a flourishing growth of plants and trees is the evidence….
'Nevertheless there are five problems one must give attention in picking a burial site. One must see that the spot will never be made into a road, a city wall, or a ditch; that it will not be seized by the high-ranking or powerful; and that it will never be cultivated. Another text says that the five problems to be avoided are ditches, roads, villages, wells and pits.'

The proper conduct of the burial ceremony has always been a matter of great importance to the Chinese. The soul of a person was believed to leave the body at death, in order to take its place in the spirit world. An elaborate funeral gave the spirits in the next world, as well as the mourners left behind, a clear idea of the rank of the dead person. The separation of body and soul was felt to cause some fear and confusion to the new spirit, so the surviving members of the family tried to provide it with all the support it needed. If they were able to ease its passage into the next world, they reasoned, the dead person would not turn into an evil spirit that would return to make trouble for the living. Containers filled with food and drink provided sustenance on the journey to the spirit world. Other objects found in graves show that life in the hereafter was thought to be much the same as on earth.

The things that have survived in Chinese tombs may not represent the total range of grave goods used at the time of the burial. Tomb robbers may have looted some of the more precious items, and fabrics may have rotten away.

"Carve wood to make carts and horses, male and female servants, and all the things needed to care of the deceased. The objects should resemble those used in real life but be smaller. According to the law, those with rank five or six offices can have thirty objects; those with rank seven or eight offices, twenty objects; and those who have not reached court posts, fifteen objects.
Prepare the lower-world furnishings. This refers to the bed curtains, cushions, armrests, tables and the like. These should also resemble those used in life but be smaller.
Prepare the container. There should be one with a bamboo cover, to hold the offerings of wine and meat.
Prepare baskets. There should be one with a bamboo cover, to hold the five grains.
Prepare earthenware jars. There should be three made of pottery to hold the wine and dried meat." 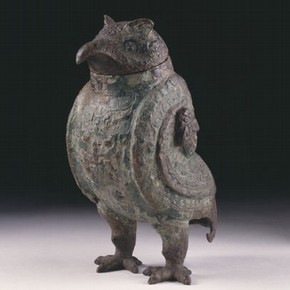 Chinese burial practices were not bound to any particular religion, and most people were very fluid with their allegiances.  A rich family might employ both a Daoist and a Buddhist priest to officiate at a funeral, or invite an expert in the Confucian classics to read out texts expressing the value of family ties beyond the grave. In fact, Chinese beliefs about death go back much further than the organized religions discussed here.

Funeral feasts and the offering of food and drink to the spirits have played a part in death rites from the very beginning of China's civilization, and they continue to do so today. Earthenware burial jars painted with bold swirling patterns survive from the Neolithic period, some even containing the remains of food.

Royalty and the aristocracy  were buried with vast numbers of vessels for food and drink, often made of metal. Bronze was one of the most important of the many materials used for grave goods. Good burials showed gratitude to the spirits of the universe and established the reputation of the dead ones in the afterworld. For almost every period of the Chinese past it is possible to pick out grave goods connected with eating and drinking. 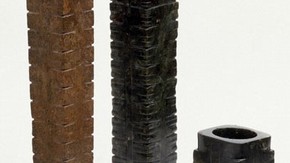 Compare the Neolithic and Bronze Age grave goods with those from the Tang dynasty (618 - 906). In the earlier period there are puzzling cylinders and discs of jade. We know it was believed they had magic properties and were crucial to communication between this world and the next, but their exact purpose is not understood. By contrast, the fine models of horses and camels, the pottery statuettes of fashionably dressed ladies and the expensive silver dishes and cups, all from Tang times, are familiar as the commodities of a luxury lifestyle.

There is another change to be inferred from the objects. There are not many statues of people and animals among the grave goods of the Neolithic period and Bronze Age as human and animal sacrifices were frequent at these times. The Shang rulers, for instance, took their servants with them into the afterlife and big tombs contained as many as 350 bodies.

By the Han dynasty (206 BC - AD 220) human sacrifice had stopped. Instead, pottery figures representing the attendants, servants and entertainers of the deceased were buried with the corpse. Many examples of these can be seen at the V&A. There is a tiny statuette together with the mould from which it was made, indicating that by the Song Dynasty (960 - 1279) fairly cheap figures could be mass-produced for the less well-off. 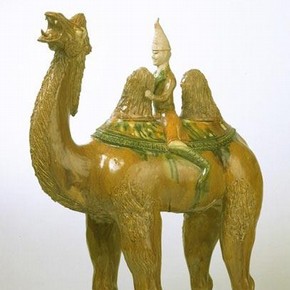 The famous army of 6000 life-size pottery warriors, discovered in 1974 near the ancient capital of Xi'an in the tomb of the first emperor of China (died 210 BC), marks a transitional stage between the use of human bodies and smaller figurines.

Poem calling back the soul of the dead, 3rd century BC, from The Great Summons translated by Arthur Waley in Morris, I. (ed.), Madly Singing in the Mountains: An Appreciation and Anthology of Arthur Waley, Harper Torchbooks, New York, 1970.