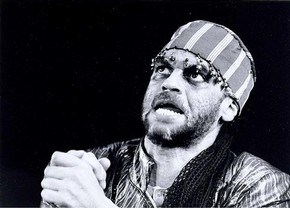 The Theatre Museum’s National Performance Archive has worked with Talawa Theatre on two projects - Blackgrounds and Blackstage - recording oral history interviews with black theatre practitioners from the 1960s to the present day.

In the 1990s Tamasha Theatre Company drew on stories from the Asian community both in Britain and the Indian sub-continent.

Tamasha’s most successful production was East is East in 1996, which was made into a film in 1999.

New writing venues such as The Drum in Birmingham, The Oval House and the Tricycle in London and the Nia Centre in Manchester continue to encourage new writing by black playwrights.

Temba was formed in 1972 by Oscar James and Alton Kumalo to produce new black writing from Britain and South Africa. They staged the first British production of Athol Fugard's 'Sizwe Bansi is Dead'. The word Temba comes from the Zulu word for hope.

In 1984 Alby James took over as artistic director and extended the company's repertoire to create new audiences.

'Back Street Mammy' by the black actress Trish Cooke looked at teenage pregnancy. It tells the story of Dynette, an educated teenager, brought up in Britain as a Catholic by her Caribbean mother. To her utter bewilderment, her first sexual encounter results in pregnancy.

Cooke explains how a particularly offensive article about the statistics of young, single, black mothers in Birmingham had provoked her into writing Back Street Mammy: 'The figure was alarming but the section which irritated me most was the part that suggested these women had purposely gone out to get pregnant. I found the whole article racist and derogatory and I could not understand why the survey had been made in the first place'.

Talawa Theatre Company was founded in 1985 by Yvonne Brewster, Mona Hammond, Carmen Monroe and Inigo Espejel. Their mission is to provide opportunities for black actors to use black culture to enrich British theatre and to enlarge theatre audiences among the black community.

Yvonne Brewster explained where the name Talawa came from: 'In Jamaica, we have a saying, “She may be small but look how she's 'talawa', meaning gutsy, feisty'.

In 1994 Talawa produced Shakespeare's 'King Lear'. The majority of the cast were black and the production made specific reference to their ethnicity - by using the rhythms of rap in certain scenes, for example. 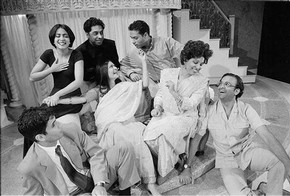 Tamasha Theatre Company draws on stories from the Asian community both in Britain and the Indian sub-continent for its productions.

'Fourteen Songs, Two Weddings and a Funeral' was first performed in the studio at the Lyric Hammersmith in November 1998 and has won several awards including the TMA Best New Musical award.

The title of the musical 'Fourteen Songs' is of course a parody of the British film 'Four Weddings and a Funeral', but the story itself is a retelling of the 1994 Bollywood movie 'Hum Aapke Hain Koun'.

The story turns on the matchmaking between two families and the conflict between family duty and love. The production made a joke of cramming a Bollywood movie including glittering saris, sweeping staircases, and big dance numbers into the tiny Lyric Studio Theatre.

Following 'Fourteen Songs', Tamasha went on to further acclaim in 1996 with their most successful production, 'East is East' which was made into a film in 1999.