Black Performance in Britain before 1800 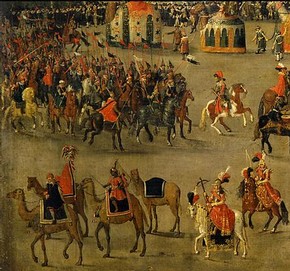 The first black people to arrive in the UK were probably an African platoon stationed by the Roman army on Hadrian’s Wall in Northumberland in the 3rd century, but records of performance start from the 13th century, when crusaders brought Moorish musicians to the UK from North Africa. They introduced new instruments - the cymbals and the kettle drum.

There are references to African performers in Edinburgh dating from 1505 and it is also recorded that the court of Henry VII employed a ‘Black Trumpete’ for the sum of eight pence a day - an image of him appears in the painted roll of the Westminster tournament of 1511.

Further evidence of black performers can be found in the painting of the 'Ommeganck: The Triumph of Isabella', which shows a great street pageant featuring many performers in Brussels in 1615.

The full painting shows a procession (Ommegang) of pageant wagons in Brussels in 1615.  Annual processions similar to this took place all over Europe, and had done since at least the 14th century. In earlier processions, all the wagons were based around religious themes. In England, Bible stories were presented as short plays, numerous wagons taking a section each, until religious drama was suppressed during the Commonwealth.

The Brussels procession was a series of tableaux with the performers all holding a pose. By the time this painting was made in the Renaissance period, the procession also included secular scenes of famous people from life and literature well as the religious elements.

Among those pictured are three black figures: a man riding a camel, a drummer behind the nativity (shown right) and a servant holding an umbrella of feathers over ‘King Psapho’ in a cart behind a group of camels, all of which suggests  that there was a black community in Brussels at the time. 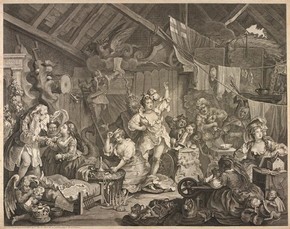 By the middle of the 18th century there were between 10-15,000 black people living in London. The development of the slave trade from the mid 17th century brought many more African people to the UK. However not all black people at this time were slaves.

Hogarth’s prints of life in London feature black performers in pageants as well as black actresses and dressers. The picture 'Strolling Actresses in a Barn' shows a group of touring actresses in various states of undress as they prepare for that evening's performance of 'The Devil to Pay' at the George Inn in South London.

Men at this time could pay to peek at the actresses changing. The figure in the centre of the image looking out at the viewer appears to be performing for us, and casts us as one of these Peeping Toms.

The print also shows the presence of black people in
London at the time: to the right a black woman is darning the stockings of an actress; and on the left, a black actress dressed as Aurora (the goddess of dawn) picks lice off the collar of a kneeling colleague whose costume has a mermaid's tail.

The engraving shows a seedy, disordered side to a play filled with magic and goddesses, but also illustrates the normality of a black presence in English working class communities.