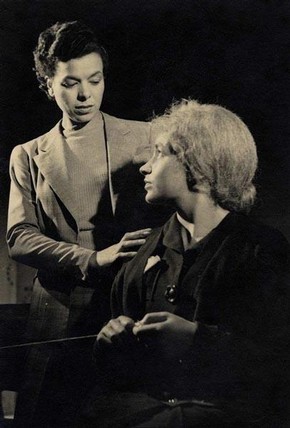 The Negro Repertory Arts Theatre was founded by Robert Adams and produced many plays including Eugene O'Neill's play 'All God's Chillun Got Wings', a play about an inter-racial love affair between a white woman and a black man, at Colchester in 1944.

In 1946 Ida Shepley appeared in the Unity Worker's Theatre revival of 'All God's Chillun Got Wings', and the first black British dance company, Ballet Negres, was established.

Born in Crewe, England, in 1908, Ida Shepley trained as a singer with voice coach Amanda Ira Aldridge, daughter of the great black actor, Ira Aldridge, before joining the radical company at Unity Worker's Theatre. Shepley was one of only two black actors in the company in this Unity production, so (as seen here) white actors playing black characters had to 'black up'.

Unity Theatre continued to feature the work of many black writers and performers including Robert Adams and Indian Playwright Mulk Raj Anand. 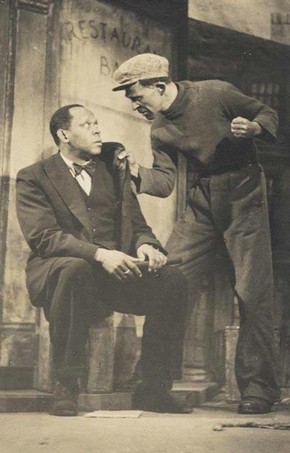 Immigration from the Caribbean and South Asia in the late 1950s and early 1960s saw a wave of Caribbean writers for the stage. Errol John won an Observer prize for 'Moon on a Rainbow Shawl', which was staged at the Royal Court in 1958.

Robert Adams was born around 1900 in British Guyana.

His achievement has been largely forgotten, yet he was a highly successful actor appearing in many theatre and films and on radio and television. He was also the founder and director of the Negro Repertory Arts Theatre, one of the first black theatre companies in Britain. Their productions included Eugene O'Neill's 'All God's Chillun Got Wings' in 1944.

In addition to playing the lead in Unity's 1946 production of O'Neill's play, Adams appeared with other black actors in Geoffrey Trease's 'Colony' (1939) about the exploitation of sugar workers in a Caribbean island.

He eventually returned to Guyana and died there in 1965.

How Deep are the Roots 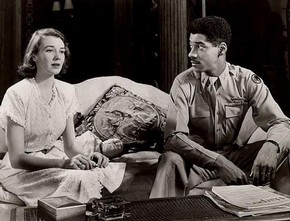 Scene from 'How Deep are the Roots', Wyndham Theatre, 1947

Written by Arnaud d'Usseau and James Gow, 'Deep are the Roots' traces the story of a black officer who returns home from World War II and attempts to get employment as a school teacher. However, the prejudice he thought had been vanquished during the war is still in evidence, and he is wrongly accused of theft by his employer, a senator.

The play follows his psychological readjustment on coming home from a war in which blacks and whites had fought together against a common enemy to discover that once again he is considered a second class citizen.

The play opened in August 1947 at Wyndhams Theatre in London's West End, and starred the black American actor Gordon Heath as the young soldier, and the white actress Betsy Drake as the Senator's daughter who is in love with him. When Gordon Heath wrote his memoirs, he borrowed the title of the play that had been such a success: 'Deep are the Roots: Memoirs of a Black Expatriate'. 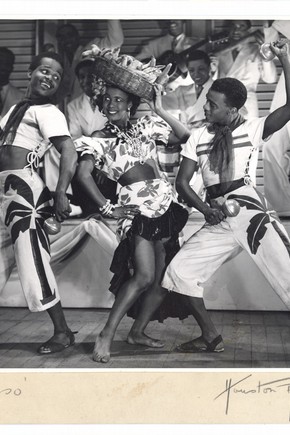 'Calypso' opened in London in 1948. It was the first musical based on a West Indian subject with a predominantly West Indian cast. The date was significant. The opening night was just a month before the Windrush brought the first West Indian immigrants to Britain.

Calypso was devised by English actor, dancer and designer Hedley Briggs, who became fascinated by Trinidad culture when he was stationed there in World War II. Calypso took local songs and dances and pasted them into a standard musical comedy story of lovers' misunderstandings. The plot was old, but the West Indian dances were performed with a dash and verve that were new to English audiences in the late 1940s.

The leading role was played by West Indian actor Edric Connor, who spent his life working to increase opportunities for black British performers. He set up an agency to represent them and campaigned for black British actors to replace visiting African American casts after six months. In 1958 he was the first black actor to perform in Shakespeare at Stratford-upon-Avon.

Mrinalini Sarabhai was an internationally acclaimed dancer and choreographer from Madras who, like Uday Shankar before her, helped popularise classical Indian dance in Britain. She trained in the traditions of Bharata-natya and Kathkali and by her early 20s had toured India, Europe and America with her company. 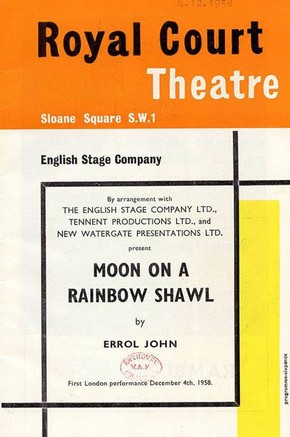 Her first London appearance was in 1949 at St Martin's Theatre in London's West End. Reviewers commended not just the technical proficiency of the company, but the fact that they presented the dances in their classical form without any Westernising influence.

That same year, Sarabhai founded the Darpana Academy of the Performing Arts in Ahmedabad in North West India. Darpana was the first school to teach south Indian dance in the region, and also taught drama, music and puppetry.

Sarabhai's daughter Mallika is also a dancer and appeared in Peter Brook's film 'The Mahabharata'. She now runs the school and their students come from all over India.

Moon on a Rainbow Shawl

Written by Trinidadian playwright Errol John, 'Moon on a Rainbow Shawl' opened in England at the Royal Court Theatre in 1958 after a provincial tour.

It brought to life the many stories of one family, the Adams, from Trinidad.

It was a realistic piece of drama that featured real-life dilemmas such as the story of Ephraim, a bus conductor who, instead of marrying his pregnant girlfriend, plans to run away to start a new life in the UK.

The play won first prize in The Observer's 1957 playwriting competition. One of the judges, Kenneth Tynan, described it as a 'hot-climate tragicomedy about backyard life in Trinidad'. The play was successful both in the UK and in America, where it was revived in the 1970s. 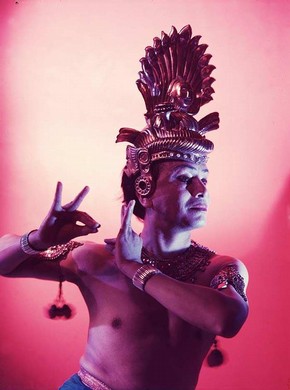 Ram Gopal was born 1912 in Bangalore in Southern India.

In this image he is shown performing Kathakali. Performers do not speak but express the action through mudras (hand-movements), poses, and facial expression while the story is narrated in songs accompanied by drums.

Gopal was proud of the authenticity of his music, costuming and style. He also rediscovered many folk dances from all over India and incorporated them into his productions. He once said, 'I feel I have justified the past, while keeping in touch with the present'.