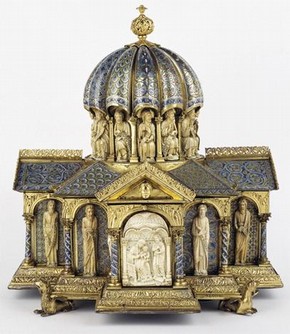 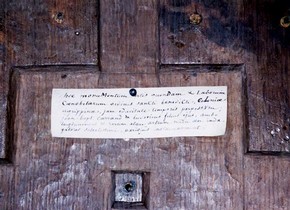 Base of tabernacle with metal underside removed, revealing an attribution note from 1855

This object, made around 1180, has been a highlight of the V&A's medieval collection since its acquisition in 1861. A conservation and research project in preparation for its display in the Medieval and Renaissance galleries in 2009 brought to light new information about the container and given it a new function and name.

Before the project began, this object had always been known as the Eltenberg Reliquary. It was thought to have come from the Benedictine nunnery of Hoch Elten on the lower Rhine in Saxony and been used to hold relics (the bones or possessions of the saints). Yet research and conservation undertaken in 2005 uncovered some surprising new evidence.

The deconstruction of the piece revealed a note hidden within the container stating that it came from a Benedictine monastery in Cologne, probably that of St Pantaleon. The enamels on the container have striking similarities with enamels belonging to this monastery, lending further support for this provenance.

During the research project curators also reattributed the use of the object. Much of the decoration relates closely to Christ. This subject matter is unusual for a reliquary, which usually shows scenes from the life of its associated saint. It suggests that the container was not a reliquary but was used to hold the Eucharist (the bread blessed by the priest during the Christian mass). The bread would probably have been kept in a small box known as a pyx within the larger container (or tabernacle).

This new research has changed our understanding of the history of this medieval masterpiece. No longer the Eltenberg Reliquary, it is now displayed in the Medieval and Renaissance Galleries as a tabernacle from Cologne. 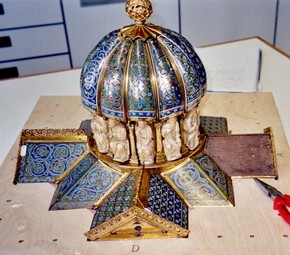 Only two containers like this are known to exist in the world. The other belongs to the Kunstgewerbemuseum in Berlin. In 2005 specialists at the Kunstgewerbemuseum embarked on a collaborative project with the V&A to research and conserve the V&A tabernacle and to compare it with the Berlin container, which had recently been conserved. The research findings were to be included in an exhibition in Berlin.

Curators and conservators in London and Berlin defined the central questions and conservation issues. The initial problem was the extent of restoration. Experts dated the style of the tabernacle to around 1180, although the object had been restored at least twice during the 19th century.

To justify its status as a star object in the new medieval display, it was necessary to determine the extent of these restorations. Conservators also wanted to take the opportunity to inspect the condition of the tabernacle and to conserve it. 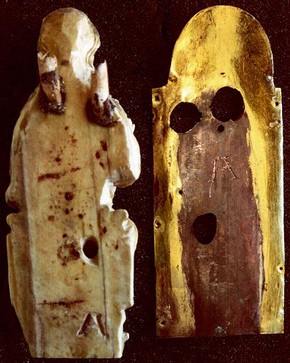 Ivory panel and copper-gilt base plate showing assembly letter A

The tabernacle is decorated with champlevé enamel plaques with floral and geometric designs. Ivory panels depicting biblical scenes adorn the four arms, while ivory figures of the prophets and the apostles surround the base and the lid.

The ivory panels and enamel plaques hide a wooden core beneath. This wood was dated using dendrochronology, a dating method based on the study of tree rings. Samples indicated that the tree was felled in 1148-58, meaning that the long believed date of 1180 for the completion of the tabernacle is highly likely.

Conservators also confirmed that the oak base and the lid of the object were made of wood taken from the same tree.

Dendrochonology proved that the core of the tabernacle was medieval. But how much of the ivory and enamel decoration was original?

Curators and conservators wanted to assess which of the ivory panels were 19th-century replacements and also to inspect the backs of the reliefs. Three of the ivory prophet figures had been viewed with suspicion, owing to their appearance and the execution of their inscriptions. Their later date was confirmed on removal.

The conservators carefully removed all the ivory panels by extracting the ivory dowels (pins) that attached them to the wooden core. Each dowel took around three hours to remove. This slow procedure was necessary to protect the wood of the core from damage.

The removal revealed a great deal about medieval methods of construction. Original assembly marks on the wood and on the backs of some of the panels showed that the medieval craftsmen used a lettering system to assemble the tabernacle. 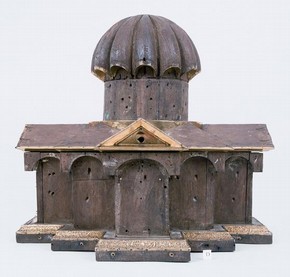 Wooden core of the tabernacle

Other panels, and the three prophet figures, had different assembly marks, which confirmed the theory that they were 19th-century restorations.

Having successfully removed the ivory panels, the team decided to take off all the enamelled plaques and metal plates. This would ensure that there was no hidden damage to the tabernacle.

The deconstruction was another slow process. From the underside of the tabernacle alone, 170 nails were carefully removed with pliers modified specially for this task.

The decorative enamels had been fired onto copper panels and then gilded. At some point in the 19th century each enamel plaque had been covered with colourless lacquer to protect the gilding from dirt and tarnish. Lacquer protects an object by providing an airtight seal around it.

Over time, lacquer tends to degrade and lose its protective qualities. This can cause tarnish to form on the metal. Conservators took samples of the lacquer and tested it to find a suitable solvent to remove it. 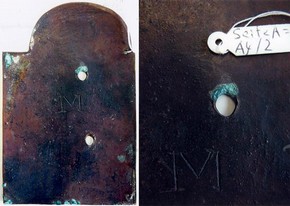 Evidence of corrosion on reverse of copper plaque

Deconstruction of the tabernacle revealed corrosion on the underside of some of the copper plaques. The metal had reacted to 19th-century adhesives used to secure them.

Conservators gently picked away the corrosion using fine tools under a microscope. They ensured there was no remaining adhesive that could cause further damage to the plaques.

The wood had shrunk over the years, creating gaps in the joints. Conservators re-glued and dowelled the walls to strengthen the joints, using clamps to hold them in place
while the adhesive was setting.

The research and conservation project has shown the tabernacle to be largely original. It now forms a centrepiece of Room 8, Faiths and Empires 300-1250, a zone that explores the characteristics of Romanesque art and architecture.

Below: conservators at work on the project.

The V&A would like to thank the Kunstgewerbemuseum for permission to reproduce a number of photographs used here.