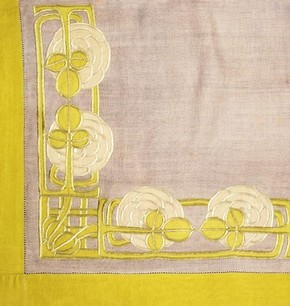 Historic textiles carry evidence of their past, showing the marks of history, age and wear. Although these textiles may be old, they are held in modern hands and viewed with modern eyes. Nowadays, we are accustomed to bright colours and sharp contrasts. The unbleached creamy white common before the 20th century is markedly different to the modern taste for optically brightened blue whites, for example. Some people think that slightly grey or yellow textiles are dirty or stained and should be bleached or washed, when in fact their colour is typical of a historic textile.

In the past, linen was part of the household laundry. Historical laundering processes were very harsh, often using alkalis (such as soda, ammonia, or borax), boiling water and vigorous beating and scrubbing. This removed dirt and grease (and also killed body lice harbouring in clothing) but such harsh treatments contributed to damage and degradation of the linen. Although linen table cloths were washed before being put away, faint stains often remain. Some of these cloths may have coloured embroidery worked on them, giving an additional complication.

If you wish to preserve your domestic linens, gentle cleaning methods are necessary. Hand washing with a little liquid soap in water, followed by several rinses in distilled water, will remove dirt. Even though this may not remove stains and the textile will not be sparkling white afterwards, it will ensure that washing does minimal damage to the linen. 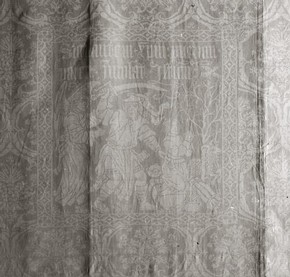 Many cloths found in antique fairs are a luminous bright white, the result hours of soaking in chlorinated bleach. Some may have been boiled using modern washing powders. They are clean, unstained and bright white but such harsh treatment damages the textile, shortening its life and reducing its historical (and possibly monetary) value.

Under no circumstances should collectable linen damasks of historic importance and value be bleached or boiled. For items of value such as these, professional conservation treatment is advisable. Conservators can use localised spot treatments and gentle chemical treatments to remove many stubborn stains. These methods are time consuming and therefore expensive but are preferable to the destruction caused by inappropriate treatments.