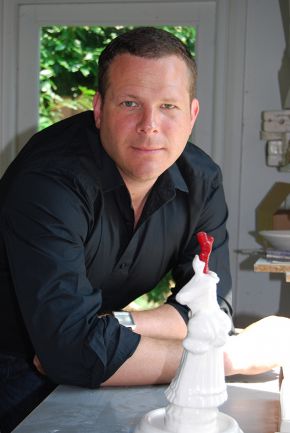 Supported by Maurice and Rosemary Lambert

Matt Smith is well known for his site-specific work in museums, galleries and historic houses. Matt started his work life at the V&A before developing exhibitions at the Science Museum and the British Film Institute. After retraining in ceramics, his work as an artist has often taken the form of hybrid artist/curator.

Using clay and its associated references, he explores how cultural organisations operate using techniques of institutional critique and artist intervention.  He is interested in how history is a constantly selected and refined narrative that presents itself as a fixed and accurate account of the past and how, though taking objects and repurposing them in new situations, or creating ‘lost objects’, this can be brought to light. Of particular interest to him is how museums can be reframed from an outsider perspective, and often this outsider perspective is taken from an LGBT viewpoint.

His solo interventions that have addressed these themes include Queering the Museum (Birmingham Museum and Art Gallery, 2010), Other Stories (Leeds University Art Collection, 2012) and Milk (Aspex Gallery, 2010).  Over the past three years, Matt has co-directed and curated Unravelling the National Trust which has seen over thirty artists working with contemporary craft (including himself) commissioned to respond to the histories of the National Trust properties Nymans House, Uppark House and The Vyne.

In 2014 Matt was awarded the inaugural Maylis Grand Ceramics prize and in 2009 received the ARC Award for Craft from Aspex Gallery. Matt is currently completing a practice-based PhD exploring the intersection of contemporary craft practice and queer identities at the University of Brighton where he also lectures.

He regularly shows his work with public collections (A Place at the Table, Pallant House, 2014; Subversive Design, Brighton Museum and Art Gallery, 2013; DIY A Revolution in Handicrafts, Society for Contemporary Craft, Pittsburg, 2010) as well as talking internationally about his practice (Tate Modern, the V&A, Valand Academy Gothenburg, the University of Bremen, Konstfack Stockholm and Bergen Academy of Art and Design). 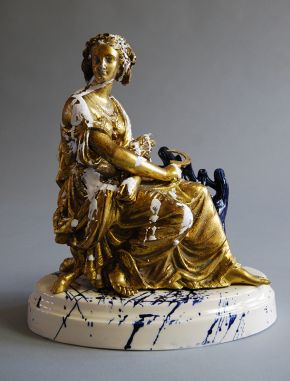 Museums, their collections, and how those collections are curated reflect society. Whilst clay is a near ubiquitous material, the objects created from it which are collected by museums are heavily selected and chosen for specific curatorial reasons. I am interested in how these collections can be (re)viewed to make new connections and see both contemporary society and the past in different ways.
Any object can be considered in numerous ways and how museums choose to describe their collections involves a carefully considered editing of those narratives. What is often of most interest to me is what is undisclosed about an object’s history. Moving the focus from descriptions of an object’s material or date of manufacture, I am drawn instead to the emotional bonds between objects, makers, viewers and collectors in order to examine what these collections can tell us about human experiences.

Research Interests at the V&A

I am interested in how collections of objects can be used as a means to display identity.  Since museums, generally, divide their collections into material groupings: ceramics and glass, metalwork, furniture, when personal collections come into museums, they are also usually divided.  During the residency, I am interested in seeing how these collections, which give an insight into a person’s taste and also how they wanted their environment to reflect themselves, can be pulled back together.

Of particular interest are two objects at the museum which were formerly owned by Horace Walpole. The Walpole Cabinet (Museum no. W.52-1925) is a wooden cabinet which was custom made to incorporate and display Walpole’s collection of cameos.  Also in the museum’s collection is a wooden cravat carved by Grinling Gibbons (W.181-1928) which Walpole would wear to confuse visitors.

These two techniques – assembling disparate objects into new composite objects and the use of one material to imitate another – will form the starting point of the making during the residency. By exploring objects which have been acquired as collections by the museum and recreating parts of them and then assembling these parts into new composite objects, I hope to make visible some of the emotional bonds and connections that existed between those objects for the people who originally owned them.

Visit Matt in his studio on Level 6 to find out more about his residency at the Museum, his creative practice and his work in progress.