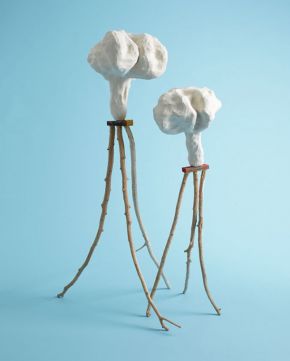 Nao Matsunaga is an artist who was born in Osaka, Japan and lives and works in London. He uses ceramic, wood and paper to express various aspects of his subconscious.

Matsunaga gained an MA from the Royal College of Art and a BA from the University of Brighton. He has exhibited internationally and has participated in artist-in-residence programs in countries including Cove Park, Scotland in 2010, Arizona State University Art Museum in 2013 and Cranbrook Academy of Art in Detroit in 2014. His work is featured in public collections such as the V&A and York Museum and in 2013 he won the British Ceramics Biannual award and the Jerwood Makers Open in 2012.

My approach to making is through seeing and doing. I do this by coiling and texturing clay, carving and assembling wood or drawing and painting on paper. I have a strong desire to make something that is unlike anything else, for the pieces to have coherent language of their own, and not directly referencing, borrowing, or using a pre-existing image or idea. 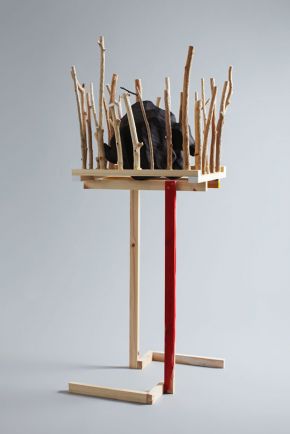 My visual source material is often drawn from the natural world; cactus, rocks, mountains, and visible traces of how man engages with his environment. I am particularly interested in how early man interacted with his surroundings, and the ways in which primitive cultures shared traditions across the world. This idea of universal similarities and primal elements that resonate are what I am attempting to capture.

I am interested in exploring tensions such as raw and controlled, still and speed, weight and weightlessness in my work. The way I approach making is to attempt to let the work make itself. This means working intuitively and also putting myself into a situation or adopting a process where something unknown or unexpected can happen.

During the V&A ceramics residency, I centred my research on mythical and ceremonial objects and how they have been documented in prints and drawings. I was interested in how different cultures depict and abstract nature and in particular, animals, to go beyond the everyday.  My starting point for this research was 'Wild Beast Hunts' where I will search the collections and find as many examples of animals, mythical or otherwise, and study their history and origins.

By researching Wild Beasts, I gained a deeper understanding of different mythologies and cultures, their rituals and ceremonies. Having a specific focus on mythical animals would allow me to compare the difference and similarity between cultures and their approach to the sacred. I hoped to decode some of these unusual visual languages and adopt them into my own practice.

During my time here I also developed new surface treatment and a deeper understanding of pattern in my work. I hoped that having first-hand encounters with my chosen objects from the V&A collection enabled me to create new work in situ pushing me into new and exciting territories. When working in my own studio, I have works in progress, finished pieces and forgotten ones around me for inspiration and reference. As new works started to have a voice of their own, objects in their vicinity start to speak to each other, and by paying attention I found a way to finish a particular piece. This is how my artworks come into being. I am excited to find out what new work will come into being having this interaction with objects from the past.

Follow Nao Matsunaga on the Artist in Residence Blog