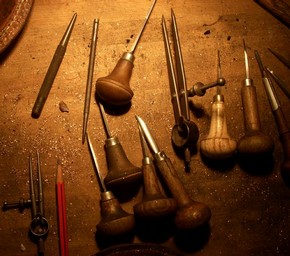 Engraving tools in the workshop of Phil Barnes, 2009

Between 1100–1250 specialist metalworkers flourished in the areas around Cologne (the Rhineland), Liège (the Meuse Valley) and Limoges (France). They supplied monasteries and churches with vessels essential for the rituals of the church, objects such as chalices, crosses, candlesticks, altarpieces and shrines. The large shrines and altarpieces were complex structures. They had a wooden core overlaid with metal, engraved and embellished with brilliantly coloured gems or enamel plaques.

The technique of enamelling used intense heat to fuse glass onto a prepared metal surface. It allowed the metalworker to create brightly coloured images. Medieval enamellers used several different techniques but champlevé enamelling was one of the most common. The word champlevé means literally 'raised fields' and refers to the way that beds were dug out of a copper plate to receive the powdered enamel.

Video: How was it made? Champlevé enamel

This short film focuses on the champlevé technique. Enameller Phil Barnes was commissioned to produce a small plaque based on a detail from a reliquary chest made around 1180 in Limoges. The film highlights the key stages that were involved in producing champlevé enamel plaques. The basic process remains the same but medieval enamellers used kilns fuelled with charcoal and relied on their judgement when firing the enamel plaques.

This film was supported by William and Valerie Brake.