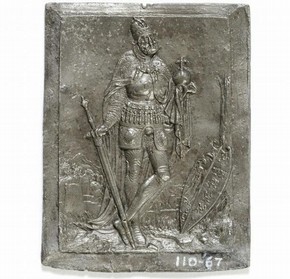 From 300 onwards Europe was in a state of transition. The Roman Empire in the West gradually declined in both power and extent and Christianity emerged as the major religion. However the legacy of Rome remained extremely influential. Early Christian art adapted the forms of Roman art and later generations of rulers continued to look back to Imperial Rome.

Charlemagne (747–814) ruled over the largest empire in western Europe since the height of the Roman Empire. Charlemagne was crowned Emperor in Rome by the Pope on Christmas Day 800, but he made Aachen (Germany) the centre of his empire.

Charlemagne's reign saw renewed interest in Roman art and ideas and many of the greatest scholars and artists of the age came to his palace at Aachen. Einhard, writing in around 830, noted that Charlemagne had had the marble columns for his new chapel at Aachen brought from Rome and Ravenna. Charlemagne and his Carolingian successors used Roman models to underline their power and status and the legitimacy of their rule. 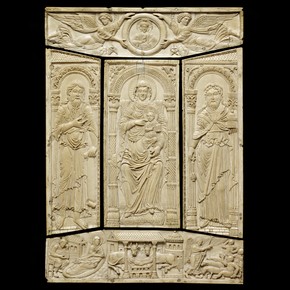 Ivory carving also enjoyed a revival at Charlemagne's court. One of the greatest treasures in the V&A's early medieval collections is a collection of five ivory panels which formed the front cover of a magnificent book known as the Lorsch Gospels. The panels were carved around 810 at Aachen. The figures resemble the ivory carvings on a 6th-century Byzantine throne in Ravenna. They show the Virgin and Child enthroned, with St John the Baptist on the left and the prophet Zacharias on the right. The Gospel book was given to Lorsch Abbey. Charlemagne's palace chapel at Aachen still survives, as does the Carolingian gatehouse of Lorsch Abbey.