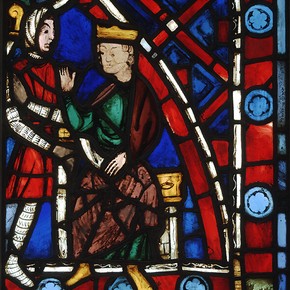 Childebert Receives St Germanus, stained glass panel, about 1240-5. Museum no. 5461-185. In Saint-Germain-des-Prés there were two windows showing the Life of St Germanus. They balanced those dedicated to St Vincent. This fragment depicts Childebert, king of Paris 511 -58. Originally, he was shown conversing with St Germanus, the bishop of Paris, whose crosier can be seen behind the soldier's head.

This panel is from the window depicting scenes from the life of St Germanus. Originally, it was part of a scene in which Bishop Germanus is trying to persuade King Chidebert to build the abbey. You can just see the top of the bishop's crosier in the top left of this panel. The other panel no longer survives, but a watercolour was made of it in the 19th century and is in the Musée Carnavalet in Paris.

Gregory (about 540-94) , Bishop of Tours and chronicler of the early Frankish kingdom, records that King Childebert (reigned 511-58) founded the abbey at the instigation of Germanus. It was completed in 558. In the same year Childebert died and was buried there. The church was the burial place of the subsequent Merovingian kings until the death of Dagobert in 638/9. He chose to be buried in his foundation of Saint-Denis, near Paris. A later account from the church records states that Childebert was given a relic of St Vincent, a deacon in the Spanish city of Saragossa, who died about 304. The future Louis VIII of France gave another relic of St Vincent, his jawbone, in 1215.