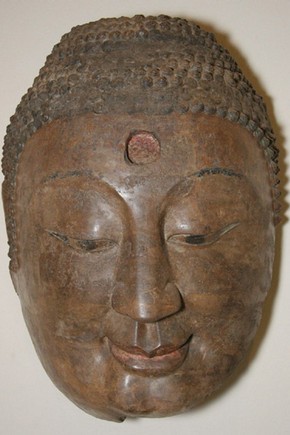 Buddha head, Hebei or Xiangtangshan (possibly), China, 550-577. Carved grey limestone with traces of pigment. Museum no. A.98-1927. Presented by The Art Fund.

This Buddha's head, which dates to the Northern Qi Dynasty (550-577 AD) is one of several pieces in the V&A's collection thought to have originated from a Buddhist cave temple in China.

Over one metre in diameter this three dimensional head with full, fleshy features is highly expressive and, despite the fact that it is only a small fragment of a whole sculpture, it retains a great sense of presence. It is difficult to ascertain whether it would have been part of a standing or a sitting figure.

The face is characterised by symmetrical features: high arching eyebrows, downcast eyes, angular nose and full lips. The eyes and the gently smiling lips in particular contribute to creating an aura of serenity and calm around the object.

The Buddha would originally have been painted in bright colours. There are still some traces of pigment remaining on the lips, eyes and eyebrows and in the 'third eye' or Urna. This would most likely have been embellished with a jewel of some kind; there is in fact a visible depression where a jewel would have been inlaid. The Urna symbolises wisdom and is one of the thirty-two 'lakshana' or special physical and symbolic characteristics of the Buddha.

Sculptures such as this played a very important role in the practice of Buddhism. Followers of the faith would worship before them, and many were specially commissioned by wealthy patrons. 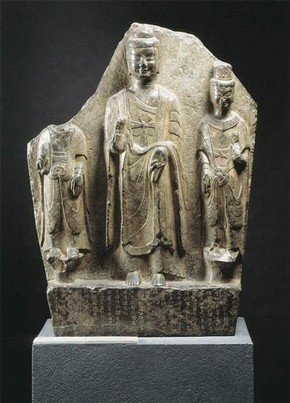 The concept of cave temples came to China from Central Asia where the tradition of building such complexes had been practised for centuries. The majority of Chinese cave temples were established with official Imperial sponsorship in the Northern regions, where Buddhism first took hold.

Among the many cave temple complexes known today are the caves at Dunhuang, Majishan, Bingling, Yungang, Longmen and Xiangtangshan.

The very act of creating these vast monuments, hollowed out from rock faces and decorated so lavishly within, was considered an act of 'piety' resulting in the accrual of merit. According to the teachings of the Buddhist faith merit is accumulated as a result of good deeds, acts or thoughts and this merit is carried over to later in life or to a person's next birth. It is thought that merit contributes to a person's growth towards spiritual liberation.

In addition to this concept of gaining merit the sculptures and paintings also functioned as an important focus for worship and as symbolic links between the wordly and heavenly realms. People would have travelled great distances to see them and to worship and make offerings before them.

The spread of Buddhism in China 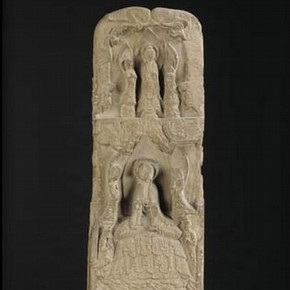 Buddhism first came to China during the late first and second centuries AD as a direct result of Han expansion and the establishment of the Silk Road. Buddhist missionaries and other followers of the faith came to China from India, travelling various routes along the Silk Road disseminating their faith as well as a variety of goods from the West.

In this way the Silk Road not only facilitated trade between peoples from the Middle East, India, Central Asia, China and beyond, but essentially created an extensive cultural interface between these distinct cultures. As a result Buddhism became an important part of Chinese life and culture along side other belief systems. People commissioned and made figures relating to Buddhism for use during worship and as an act of piety and devotion to the faith.

Buddhist iconography was gradually assimilated into Chinese visual art and culture along with increasing knowledge and familiarity with the Buddhist doctrines and texts. Buddhist temples, monasteries and cave temple complexes replete with Buddhist sculpture and painting were established in great numbers and spread gradually throughout China from its Northern regions.

History of the Northern Dynasties 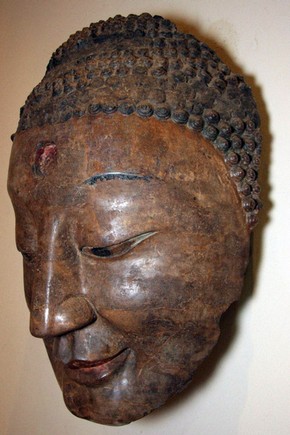 The Buddha's head is thought to have been made in the Northern Qi Period (550-577 AD). The Northern Qi were one of a number of ruling dynasties that held power in China during the Period of Disunion (265-589 AD).

Following the collapse of the Han dynasty in the early third century there was an extended period of war and political upheaval in China which disrupted the lives of people across the country for over three centuries. This period is commonly known as the Period of Disunion (265-589 AD) and was characterised by violent power struggles between a succession of small kingdoms. During this time China was repeatedly invaded by a barrage of Northern tribes and minority peoples from the territories beyond the Great Wall.

As a result of this political instability China was, by the fourth century effectively divided into two parts. In the North a non-Han people known as the Tuoba or Northern Wei established the first of the Northern dynasties, with their capital at Datong in Hebei province, in North East China. The mainly Han Chinese Southern dynasties based their capital at Nanjing in the South of China. 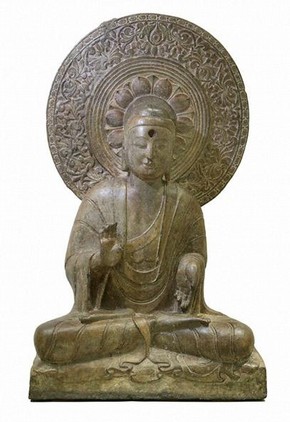 Seated Buddha, possibly Northern Qi, China, Museum no. A.4-1924. It has been suggested that this marble sculpture of a Seated Buddha with Halo (A.4-1924) dated to the Northern Qi period, could also have originated from Xiangtangshan. However, a firm consensus has yet to be reached as further research is carried out.

The huge carved stone Buddha's head (A.98-1927) was recently identified by visiting scholars from the University of Chicago as having originated from the Xiangtangshan cave complex in Hebei province China. This identification was part of an international, collaborative research project into the visual art and culture of the Northern Qi period.

It was also suggested that this sculpture of a Seated Buddha with Halo (right), dated to the Northern Qi period, could also have originated from Xiangtangshan. However, a firm consensus has yet to be reached as further research is carried out.

The cave complex at Xiangtangshan was established with Imperial sponsorship during the sixth century and exemplifies the importance of Buddhism in the life and culture of the Northern Qi at this time. Unfortunately, the Xiangtangshan caves are today in a severe state of disrepair.

In the early twentieth century the exceptionally high quality of the artworks at the site attracted attention from art dealers and collectors from around the globe. As a result large quantities of these art works were taken; images were removed and sculptures were forcibly cut from the walls causing serious damage to the caves as well as the artefacts themselves. The art work was then sold on the international art market and thus scattered around the world.

As many of the sculptural works from the caves have now been outside China for nearly a century the caves have never been photographed with all the original sculpture intact.

The project is being led by the Centre for the Art of East Asia and the Smart Museum of Art, based at the University of Chicago, and will involve a large number of scholars and cultural institutions from around the world. The project will focus on the sixth century Buddhist cave temple complex of Xiangtangshan ('Mountain of Resounding Halls'), situated in Mount Gu, southern Hebei province, North East China.

One of the main objectives of the project is to locate sculptures and fragments from the Xiangtangshan caves in collections around the world and record them with accurate 3-D scanning technology. These images will be used to build up a database of images which will then be used to produce digital reconstructions of the former appearance of the caves, their contents and their architectural design. This will allow the sculptures to be studied in their original context for the first time.

The second major objective is to initiate an international collaborative effort to research and reassess the art of the Northern Qi period. In recent decades numerous archaeological finds in tombs and temple sites dating to the Northern Qi and its contemporary Northern Zhou (557-581 AD) have brought this period to the fore of scholarly attention. The artistic importance of the late Northern Dynasties period and the multi-ethnic characteristics of its culture have been widely noted. However, the need for further research and exploration of this period is also evident.

The project coordinators plan to host a major exhibition at the University of Chicago's Smart Museum of Art to display the research results and the digital reconstruction of the caves. The exhibition will present a combination of digital imagery and actual examples of art from Xiangtangshan. The exhibition will also be accompanied by a catalogue on the art of the Xiangtangshan caves and the visual culture of the Northern Qi period, documenting each stage of the project.

The Xiangtangshan Caves Project is an international collaborative research project which seeks to establish a better understanding of the art and visual culture of the Northern Qi in China.

The International Dunhuang Projectis a ground-breaking international collaboration based at the British Library to make information and images of more than 100,000 manuscripts, paintings, textiles and artefacts from Dunhuang and other Silk Road sites freely available on the Internet.