An interview with James Bettley

James Bettley is a freelance architectural historian, currently working on a revision of the Pevsner Architectural Guide to Essex. He was Head of Collection Development at the National Art Library at the V&A, 1997-2000, having previously worked at the Royal Institute of British Architects and the Design Museum. In 1999 he received his PhD from the Courtauld Institute of Art for his thesis on late 19th-century church decoration. He has edited The Art of the Book: From Medieval Manuscript to Graphic Novel (V&A Publications, 2001).

During the 19th century, England saw an unprecedented expansion in the number of churches being built around the country. Partly a response to population increases, this change was also due to a spirit of revivalism within the Church of England. With a return to ancient forms of worship and a focus on Holy Communion came a need for new equipment and furnishings within the church. Here James Bettley introduces a little-known but highly influential 19th-century industry: church-furnishing

Why was there so much building and restoration of churches in the 19th century? 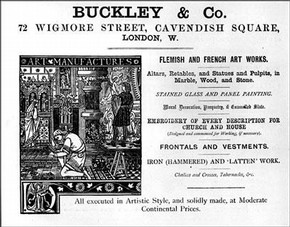 James Bettley: It was principally in response to the growing population, especially in urban areas. Particularly in the new manufacturing areas, in the north of England for example, or in London, there were many more people than there were places for them in churches. Situations in some parishes meant that one church was serving 5000 or even 10,000 people. There was also a sense of competition from Non-Conformists and Roman Catholics. One needs to remember that in the 19th century there was still a great fear and suspicion of Roman Catholics. The Anglican church still held three state services during the year: one on Guy Fawkes' Night, 5 November; one on the anniversary of the execution of King Charles I; and one on the anniversary of the restoration of the monarchy in 1660. These were very symbolic historical events, which celebrated the strength of the Church of England and its links with the state.

The sheer scale of church building work during this period is really quite hard to imagine now. At the beginning of the 19th century there were about 10,000 parish churches in the country. By 1872, when the survey was carried out, 3204 new churches had been built, plus 925 existing churches had been entirely rebuilt. That's a total of over 4000 new churches. There was a survey carried out in 1875, where all the dioceses of England were required to report how many churches had been built or restored at a cost of more than £500 in their diocese, and the total figure for the country came out at 7892, at a total cost of just over £24 million, which equates to about £1.2 billion in today's money.

One should consider not only the sheer number of churches that were built, but also how the churches were designed and the ways in which they were used. In the 1820s and the 1830s, there was increasing interference by the state in church affairs, especially in Ireland, where there was still an established Anglican church, although the vast majority of the population were Roman Catholic. There is an interference of the state in church affairs, but at the same time the state itself is becoming less Anglican, because the growing Non-Conformist and Catholic population also begin to have real power, which was denied to them up until the 1820s. From 1828, Non-Conformists are allowed to be Members of Parliament. As the century progresses, Jews and eventually atheists are allowed to sit in Parliament, which meant the Church of England was being regulated by a body that was no longer exclusively Anglican. 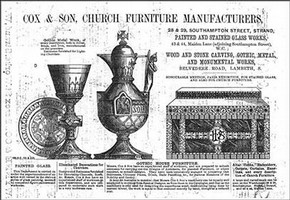 The power of the Church of England begins to be eroded in other ways, so that registration of births, deaths and marriages ceases to be exclusively a Church of England function and becomes a civil one. A civil registrar is appointed, so that the official registration of births, deaths and marriages is taken out of the church's control. For the first time in the 1820s, it is possible to have a civil ceremony for marriage rather than being married in a Church of England church. The church sees itself under threat and wants to reassert its authority - the movement that is the first to address this problem is the Oxford Movement, launched in 1833, which examines the Church of England and the way it's conducting itself. As so often happens in politics it looks back to its roots, and in the case of the Oxford Movement, it tries to get back to some sort of more fundamental form of worship that strips away everything that's been accrued over the centuries. And one way in which this demonstrates itself to the outside world is in a revival of more ancient forms of worship and a revival in the importance of Holy Communion as the principal act of Christian worship. In the 17th and 18th centuries, Holy Communion was celebrated three or four times a year in most parishes, and the emphasis of most church services was on readings from the Bible and particularly on the sermon. Those things were slightly downgraded and celebration of Holy Communion was the most important aspect of worship. 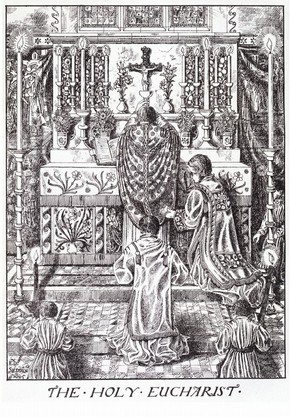 All this was happening at the same time as a general Romantic movement and an interest in Gothic as far as art and literature is concerned, and in particular, a great interest in the past. The 1820s and 1830s were the time when counties were setting up their antiquarian and archaeological societies, which as often as not were dominated by clergyman. There was a new interest in the architecture of the past, and in particular Gothic architecture and practically anything that dated from the Middle Ages and before the Reformation. The leading society to emerge out of this interest was the Cambridge Camden Society in 1839, which took a great interest in really everything to do with churches: the way they were designed, the way they were furnished, the way the services were conducted, the music and so on. They were tremendously influential. This sort of revival required a complete re-equipping of churches, in terms of furnishings and fittings, vestments that the clergy wore, the chalices which they used for Holy Communion, all the other bits of kit and equipment which were needed to conduct services in the new and more elaborate way. Vestries were built where they'd never been needed before, so the actual layout of the churches changed as well. Chancels came back into fashion, and then the idea of having a choir was brought in. Before the 1830s no parish church had a choir sitting up in the chancel - it was a complete invention.

Churches were almost starting again from scratch. Manuals were written, explaining in great detail what you do and when, which bits of equipment you used and what you should be wearing and who should be where, of which the most famous was the Directorium Anglicanum, published in 1858. Ritualism as a movement within the Church of England starts to take off, and that is really the point at which attention begins to switch from restoring the church buildings to sorting out the interior and making sure that that's all properly organised. And the whole process is driven partly by a change in taste, there's no doubt about that, but also, just as important, by a change in practice. The whole process is partly design-led, but it's also function-led. 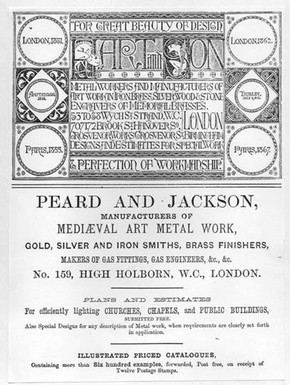 This is really where the church furnishers come in. Church furnishing may occur after the architect has signed off the project, because the funds aren't there immediately. Typically, you'll go into a church and you find it's got about half a dozen windows, starting from the east, slowly working their way back towards the west, all designed by different people - one added every ten years or so. And then the whole process just sort of stops about the end of the 19th century. Church furnishers - people who can supply everything that goes into the church - are really a purely 19th-century phenomenon. Kelly's Post Office London Directories, which had a classified trades section like Yellow Pages today, introduced the classification of church furnisher in 1859. By 1865 there were 9 entries. By 1875 there were 26. By 1885 there were 34. By 1895 there were 42. That makes 42 church furnishing companies in London alone. After 1895, the numbers stay more or less steady until about the First World War, then they drop away again, and in fact, of the 42 companies that were listed in 1895 in London, only two are still in existence.

Take a firm like Jones & Willis, who were one of the biggest, based in Birmingham. If you look at their catalogues, they were selling absolutely everything that you would need: altar frontals, candles, umbrella stands, all the furniture and fittings, the lectern and the seating and so forth - even complete prefabricated church buildings that could be shipped out to the colonies. They all issued catalogues, these firms, and you could either simply pick something straight out of the catalogue or you could ask them to do something specifically for your church. And they would have their own designers working for them. Alternatively, the architect who was working on your church could design the fittings and a company such as Jones & Willis might then make them up. Equally, they might be made-up by smaller specialist joiners.

Considering the prevalence of the Gothic style, would designers of church furnishings be a distinct group of people from those serving a domestic market?

Bettley: Yes, there certainly was some overlap, and yes, people did like to have Gothic-style furniture and so on in their homes as well as finding it in churches. Most church furnishing companies were probably not producing domestic furniture. But there was a firm called Cox, Sons, Buckley & Co., who were using domestic designers as well as ecclesiastical designers. In fact in the 1870s they branched out into domestic art furniture, as it was called at the time, using well known domestic designers like Bruce Talbert and Moyr Smith. So in that firm there was certainly some overlap. Watts & Co., founded in 1874 and still in business today, was set up to supply both the domestic and the ecclesiastical market.

What explains the decline of this industry?

Bettley: I think there was partly a change in taste away from the mass-produced. There was quite a strong reaction against the idea that you could just go to a catalogue and pick a design and buy something off the shelf. And this coincides with the rise of the Arts and Crafts Movement and the feeling that everything should be individually produced. If you go to one of the great Arts and Crafts churches of the 19th century, things are not going to have come from one manufacturer, from one supplier. Different pieces are designed by different people, perhaps under the overall control of the architect, but you'll find in fact many more individually crafted objects. And in any case, it is in the end a finite market and there must come a point when most churches are equipped. They've got what they need, and because churches generally are short of cash and quite conservative anyway, they're not going to change just for the sake of change.