Here we present some background history and shows the kind of objects that wealthy Chinese people have collected at different periods. It also shows the sort of Chinese art that westerners have collected over the past 150 years. The collecting habits of rich men from the Ming dynasty (368-1644) form the focus of this section because the Museum's collection is especially strong for that period.

A Collector's Choice of Objects 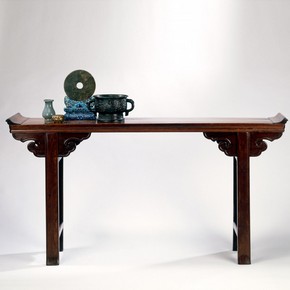 Art-collecting was an exclusively male pursuit in China. A well-to-do gentleman living at the time of the Ming dynasty might have had pieces like those shown here (right) in his collection.

The Neolithic jade disk (2800 - 1900 BC) and the bronze vessel (1050 - 950 BC) were already extremely old by the Ming period. They were first appreciated during the Song dynasty (960 - 1279) when they were excavated from ancient burial sites. Even though their original function was not understood, collectors were prepared to pay high prices for such goods.

The crackle-glaze vase made at the end of the Song dynasty would have been appreciated for its shape and the type of glaze used to create its plain colouring; no Ming collector would have been without an example of china from this golden age of ceramic production. In contrast, the gilt bronze box, which is signed by its maker, would have been new at the time it was collected.

Although most Chinese things are not inscribed in this way, during the late Ming period many craftsmen added their names to their products in an attempt to elevate their work to the status of collectors' pieces. Prior to this, it was unusual for anything but paintings and calligraphy to be signed.

The importance of calligraphy and painting

Painting and calligraphy were the two art forms most highly valued by Chinese collectors living in the Ming dynasty. The formal, aesthetic qualities of calligraphy have been appreciated in China since the fourth century AD and very few examples of importance were made available to non-Chinese collectors. In any case, calligraphy was not well understood or valued by western collectors. Calligraphy, therefore is poorly represented in European museums and the V&A has no examples at all. It does, however, have a few paintings of the kind that might have been collected during the Ming period. 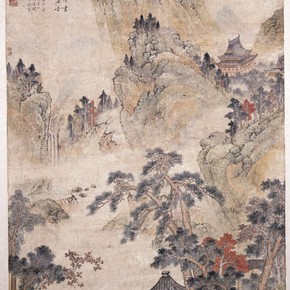 "Grand landscapes with tiny human figures are a common subject in Chinese painting. In this example, a gentleman and his servant are on their way to visit a friend in the mountains. The painting, which is in ink and colours on paper, would have been kept rolled up and only brought out when the owner wished to look at it or show it off to friends. Long Chinese paintings like this, called hanging scrolls, have a silk cord attached at the top so that they can easily be hung up for viewing. When not in use they are wound around a roller attached to the bottom. Many Chinese paintings in western collections, including this one, no longer have the roller, neither are they mounted on to the special silk backgrounds which are regarded by Chinese people as an integral part of the work of art.

In examining paintings, Buddhist subjects and narrative paintings that offer exhortations and warnings are superior. Next comes landscape with its inexhaustible flavour, hazy scenes with mists and clouds being especially fine. Next come bamboo, trees, water, and rocks, the flowers and grasses. As for court ladies, birds, and beasts, the aristocracy may enjoy viewing them, but they are not included among the purer enjoyments."

"Trees, with their wrinkled bark and their twists and knots, should show their age. Rocks should be three-dimensional and shading lines used in their depiction should produce a rugged yet mellow effect. A landscape with mountains, water, and woods and springs should present an atmosphere of placidity and vastness and should clearly show the season, the time of day, and the [prevailing] weather. Rising or subsiding mists and clouds should also be depicted. The source whence a river flows as well as its destination should be clearly defined, and the water in it should appear fluent. Bridges and roads should show the way by which people come and go, as narrow paths wind through wildernesses. Houses should face in different directions in order to avoid monotony, fish swim hither and thither, and dragons ascend or descend. Flowers and fruit should bear dew drops on all surfaces and should always indicate in which direction the wind blows. Birds and animals, posed to drink water, to pick food, to move, or to remain still, are captured in spirit, as well as life-like. When a painting satisfies these criteria, it cannot but be the work of a great master."

"I often returned to the mountains and observed the changing forms of the clouds and the mists in the mornings, and also the unusual shapes of the trees and the springs. I have recorded all I have seen on the plain silk. I sometimes feel my paintings are better than those of my contemporaries and sometimes worse; such are the pleasant diversions of hermits. I painted this album after drinking wine by lamplight; its is not worth examining by critical eyes."

"Having selected some works by famous painters, you should not hang more than three or four in a room. After enjoying them a few days, you should exchange them for others. In this manner you will see all your scrolls and they will not be damaged by dampness on inclement days… For viewing scrolls, you must invite only true connoisseurs and have one of them unroll them with great care. On the day you take the scrolls from their containers, the surfaces of the paintings should be lightly brushed with a horse tail or silk whisk, but on no account should one use a coir-fibre brush. In the room one should never burn incense of aloe wood, laka wood, or camphor, or any made with oil which would produce a great amount of smoke…The windows must have panes of oiled paper and the doors should be covered with lowered blinds. Before each painting you should place a small table so as to protect it. The table should have nothing placed on it that might obscure the sight of the painting, but perhaps only an incense burner, zither, or ink slab."

Admiring your paintings, about 1240, from Chao His-ku, about 1240, quoted in Bush, S and Shih, H. Early Chinese Texts and Painting, Harvard University Press, 1985

"For larger scrolls you should make a cupboard; the best material is speckled nanmu [a type of fragrant cedar wood], the next best fragrant nanmu. Its height should be determined in accordance with the size of the scrolls, its breadth should not exceed two chi, and it should be about one chi [33 cm] deep. One of the door panels should stay closed; the pins of the hinges should be made of red copper, and have the ancient spool-shape. The stand of such a cupboard should not be higher than six cun [2.5 cm]. The inside should on no account be covered with paint or lacquer, or be lined with paper. Hand scrolls and albums should be put in bags made of antique brocade, or be placed in boxes made of red or white sandalwood. The inside of such a box should be lined with fine white silk of the Xuande period [1426-1435], showing a small design of clouds and phoenix birds. If such a lining is padded with new cotton wool sprinkled with sandalwood powder, then this will not only make the scroll exhale fragrance when it is unrolled, but it will also keep away insects."

The techniques used to paint a Chinese picture are much the same as those used for writing characters. Identical implements and materials are employed, and the brushstrokes are formed in the same way. So people who had been taught to write often painted pictures as well; the difference in skills was not nearly as great as that between western writing and oil painting, for example. Closely copying well-known paintings from the past was an accepted way of learning to paint in China (as in the west). The careful repetition of a master's brushstrokes was thought to put the painter in harmony with the mood behind the picture. Both famous and not-so-famous artists made copies.

During the Ming dynasty, however, when collecting became extremely popular, the production of fakes was rife. There simply was not enough genuine art to go round. Visiting a friend in the mountains, although it was painted between 1550 and 1600 in the Ming period and is a 'collectable' item today, could not possibly have been the work of the artist whose signature it bears in the bottom right-hand corner. Li Zhaodao was active in about 670-730. None of his pictures survive but written descriptions of his style suggest that lavish blue and green mineral pigments were the hallmarks of his work. The forger did not even attempt to reproduce the distinctive colouring but instead concentrated on getting the inscriptions and seals to look authentic.

Paintings were not the only items to be faked; ancient bronzes were also reproduced and methods of faking gold were developed. Gullible Ming purchasers were fooled into paying high prices for all sorts of spurious works of art despite much advice on how to spot fakes. Some of these fakes are on display at the V&A.

"Ancient vessels of the Xia, Shang and Zhou dynasties [about 2000-221 BC] do not have the slightest rank odour, though those that are newly excavated have an earthy smell that disappears in time. If a vessel is a fake and is rubbed in the warmed palms of the hands a terrible stink of bronze arises."

Testing for a fake bronze vessel, about 1230, from Zhao Xigu, Conspectus of Criticism of Antiques, about 1230, translated by Rose Kerr and quoted in Later Chinese Bronzes, Bamboo Publishing/Victoria and Albert Museum, 1990.

"Chemicals for faking gold: These are salt-petre, copperas, and salt. They are put in an earthenware pot with clean water, and boiled until the colour of the mixture changes. Then the mixture is applied to a metal object with a brush. This object should be baked over a fire until its colour begins to change. Then it should at once be put into water and brushed clean. If it does not assume a yellowish colour, the whole process should be repeated. The colour, is however, only that of the surface."