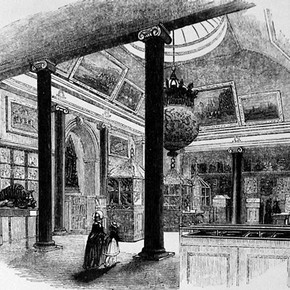 The East India Company Museum, Leadenhall Street, London. Engraving from Charles Knight’s 'London', vol 5, 1843. One of its most famous exhibits, Tipu’s Tiger, can be seen on the left had side. It is now in the V&A.

The V&A's South Asian collections have their origins in the East India Company's Museum, or Oriental Repository, founded in 1791at the Company's headquarters in Leadenhall Street. It contained an eclectic mix of objects accumulated by individuals associated with the Company, including a substantial number of textiles such as Kashmir shawls, silks, cottons, garments and carpets. Art and antiquities were not considered worth displaying and were stored in the stables. The Company took responsibility for Indian displays at the international exhibitions in London (1851) and Paris (1855) and many objects were also acquired from these and later exhibitions. In 1858, following the end of East India Company rule in India, the museum became a department of the India Office in Whitehall.

After the Great Exhibition of 1851 the Museum of Manufactures was established at Marlborough House. It became the nucleus of the South Kensington Museum and acquired a number of objects from non-European cultures, chosen as items of exemplary design.

Nearly a quarter of the £5000 budget allocated by the Government was eventually spent on Indian objects from the exhibition, and of these Indian textiles were very well represented, accounting for nearly half of the 139 items purchased from the display. 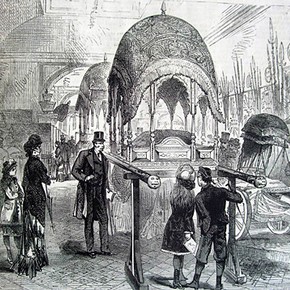 In 1875, the India Museum was moved to a site in South Kensington. Four years later, after much debate, the ownership of most of the India Museum collections was transferred to the South Kensington Museum, renamed Victoria and Albert in 1899. By this time, the joint collections were considered to be neither systematic nor properly representative of Indian applied art; the concept of Indian 'fine art' was not considered seriously until the early 20th century.

In 1881Caspar Purdon Clarke, who had arranged the new Indian section, was sent to India to expand the collections with instructions to collect objects in everyday production in order to encourage the 'native art manufactures' of India. It was also intended that these would provide models of design and ornamentation for British manufacturers and art students. Clarke's purchases included probably the museum's largest single acquisition of Indian textiles, in all more than a thousand examples of textiles and dress.

The expansion of the South Asian collections, like the growth of an exhibition culture and the development of museums, reflected the 19th-century impulse to collect, classify and display both natural and manufactured objects. The products of Britain's overseas empire were especially highly prized, with India famously considered as the jewel in the imperial crown. Thus the critical re-examination of the Museum's history in the post-colonial period defined it as an institution 'inextricably linked with the structures of imperialism', both in its 'approaches to its collecting and the interpretation of its collections once they were assembled.' The Indian collection was seen as particularly problematic in this respect. Find out more about the history of museums and collections. 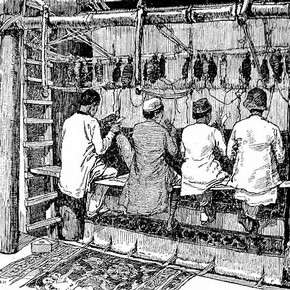 Seen from this perspective, Purdon Clarke's purchases became art objects in the custody of the British state once entered into the Museum's Acquisition Registers in South Kensington. Yet the motives for collecting Indian textiles were broader than merely displaying India as a British possession. For many influential designers, curators and critics in Britain, including Owen Jones , George Birdwood and William Morris, hand-made Indian artefacts, especially textiles, represented qualities which were becoming lost or degraded in the goods being mass-produced in the factories spawned by the industrial revolution. They were seen as a potential source of salvation for British design and aesthetic values. Victorian notions of medieval craftsmanship and a new, ethnographic interest in Indian craft skill were fused in a hybrid aesthetic described by Tim Barringer as 'colonial gothic', a response to Britain's industrial modernity.

The Indian Section at South Kensington was eventually physically moved into the new V&A buildings in 1911 and renamed the 'India Museum'. The purchase of the Sanchi Torso the previous year indicated the beginning of serious attention to Indian fine art, rather than the practical arts that interested the Victorian design reformers. Scholarly interest in the cultural context and techniques of South Asian textiles was revived and developed later in the century through the work of John Irwin and subsequent curators.

Turban-cloth (pag), probably Punjab, mid-19th century, Museum no. 5931 (IS). Woven silk with gold-wrapped silk ends. The turban has been woven with double warps and wefts of red and green silk to give a shot effect, except where they are woven separately to produce double ends of single colours.

Embroidered cap, Ludhiana, Punjab. Bought from the Paris Exhibition of 1867. Museum no. 737 (IS)