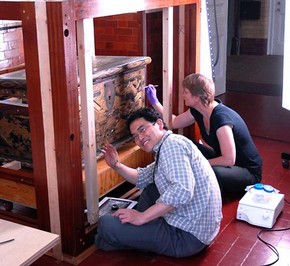 This two-day conference built on the achievements of the Mazarin Chest Project. It brought together a group of twenty speakers from the fields of lacquer conservation, conservation science and material culture from Australia, North America, Japan, Europe and the UK.

Art historical papers explored aspects of lacquer history including the trade in lacquer in Asia and Europe. Scientific papers included lacquer analysis, the use of solvents for cleaning lacquer, stress measurement in lacquer films, and new evidence of the use of South East Asian materials in seventeenth century Japanese export lacquer.

The keynote talk was given by Dr Christine Guth.

The conference was made possible through the generosity of The Getty Foundation.

Julia Hutt
How many 'Mazarin Chests' were there?

Kaori Hidaka
Maritime Trade in Asia and the Circulation of Lacquerware

Suzi Shaw
A Cornucopia of Carving Techniques: An Analysis and Treatment of a Qing Dynasty Lacquered Screen

Emma Schmuecker
The Cleaning of Red Lacquer on Japanese Armours

Jamie Hood
Cross Section Analysis of Lacquer from Japanese Armour: An Aid to Establishing the History of an Object