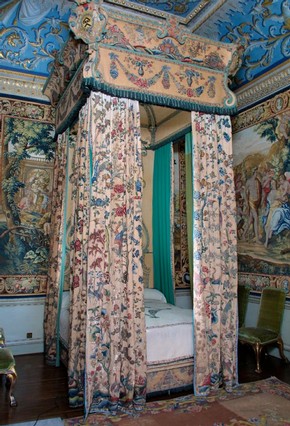 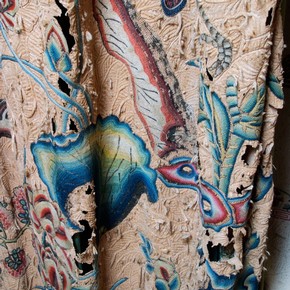 Detail of the silk velvet counterpoint bed hangings of the William Kent bed. Museum no. W.58-2002

In 2002 the Victoria and Albert Museum acquired some of the finest sets of furniture and tapestries at Houghton Hall, Norfolk. They passed to the government in payment of inheritance tax, with an agreement to keep them in the rooms for which they had originally been designed.

Houghton was built for Sir Robert Walpole between 1722 and 1735. Walpole was Britain’s first Prime Minister, and this palatial house was intended to celebrate his rising political fortunes. The state rooms have always been a showpiece. They still retain their original decoration, designed by the architect William Kent, and their original furnishings.

The pieces now in the care of the V&A include two state beds, with two sets of chairs to go with them. Their covers and hangings have all survived from the 18th century. The green velvet bed, with silver-gilt trimmings and an enormous scallop shell at the head, is an exceptionally powerful design by William Kent. There are also three remarkable sets of tapestries, including the unique Kings and Queens set, woven by the king's tapestry maker in the 1670s.

For all these pieces to survive so untouched is exceptionally rare. The partnership between the V&A and the owners of Houghton Hall is intended to ensure that they are preserved here in perpetuity for future generations to enjoy.

The Furniture, Textile & Frames section of the Conservation department is involved in the major project to conserve the collection of 17th- and 18th-century textiles and furniture at Houghton Hall. The collection includes the famous green velvet state bed designed by William Kent and a state bed with embroidered bed hangings in Chinoiserie design as well as three sets of tapestries and two large suites of early 18th-century furniture. The objects will remain on display in their original setting at Houghton Hall.

Conservation of the objects

The conservation of these objects presents many challenges. The hangings of the embroidered state bed, which dates from the reign of George I (1714–27), are most urgently in need of conservation.

The embroidery has been worked on a linen ground quilted with wool cording. The linen is now very weak and in many areas the wool cording is exposed. There are also many areas of loss.

The silk counterpoint (a rare survival) of the William Kent bed is splitting badly and the metal thread embroidery is loose in many areas. Old repairs need to be removed and the counterpoint needs full support. The profile of the mattresses on the bed is incorrect and needs adjustment.

The unique Kings and Queens tapestries, which date from 1672, have areas of mechanical damage at their lower edges. Needle weaving has been used in an attempt to repair areas of silk loss. The tapestries need to be cleaned and supported.

The two suites of furniture are superb examples of early 18th-century upholstery and their construction will be thoroughly documented by conservators. The gilding on both suites of furniture will be consolidated and the top covers of the chairs in both suites will be covered in dyed conservation net so that they are protected on open display. Conservation work is expected to take at least five years.