Conservation Case Studies: Building a Frame for The Virgin and Child by Carlo Crivelli 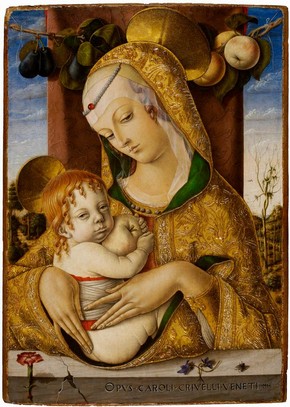 The 'Tabernacle' style of frame was not considered to be representative of the type of frame the Crivelli painting would have originally had. The proportions were very heavy and did not complement the painting well. Curatorial and Conservation Departments carried out research into the type of frame this painting was likely to have had originally. The V&A have a small collection of Italian Renaissance frames in their stores and these were examined to see if any were suitable to frame the Crivelli painting. A good frame was found, unfortunately however it was too large to frame the Crivelli and furthermore was in extremely poor condition.

It was decided to make a copy of this frame in order to display the painting appropriately in the Medieval and Renaissance Galleries. The whole frame was to be reduced in size by approximately 10%. A digital reconstruction of painting and frame was produced showing how the new frame would appear in reduced proportions, from this image drawings were made to make the new frame. 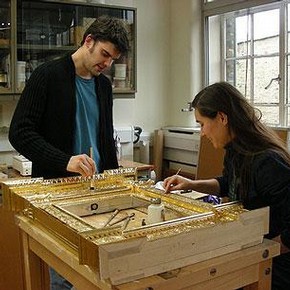 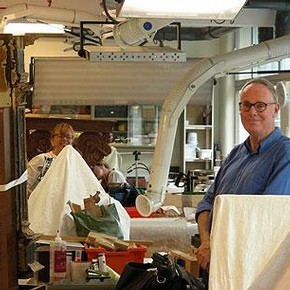 Construction of the frame

The frame was made out of jelutong (hard wood). Mouldings were hand cut with chisels and planes and the following elements were carved, the capitals, dentils, beads and 'bead and reel.' Once all the wooden elements were assembled using dowels and animal glue the whole surface was coated with a layer of animal glue.

The rest of the relief decoration was cast in composition, from moulds taken from the original frame. Composition is a malleable material made of chalk glue linseed oil and colophony rosin which when warm can be pressed into moulds. Some elements such as the masks fitted in size, other elements, such as the length of candelabrum decoration on the pilasters, had to be cut to fit and some ornament was removed.

Care was taken to remove ornament in logical places i.e. at the end of a stem or leaf, rather than through a flower. In both the predella and entablature friezes some ornament was modelled by hand to fill gaps. The ornament was applied with fish glue sometime mixed with chalk.

Once all the cast ornament was applied to the frame a layer of 'gesso,' chalk and rabbit skin glue was applied to the wooden areas. The new cast work was not coated with 'gesso' as it would have clogged up some of the fine detail, such as the fine punch work in the background. Once dry the gesso was smoothed and cut back around areas of carved ornament.

Bole (a mixture of animal glue and clay) was then applied over the white 'gesso' ground onto the wooden areas and over the ornamental cast work. Firstly a layer of yellow bole was applied overall followed by areas of relief painted with red bole. The shade of red was carefully chosen to imitate the colour on the original frame. Once dried the bole was polished to a high sheen ready to gild.

Twenty-three and three-quarter carat gold leaf was applied over the whole surface. Newly gilded, the frame was extremely bright. The surface was gently 'distressed' by gently removing some gold from the surface to reveal the red bole below. The gilded surface was then toned down to reduce the sheen with the application of a pigmented layer.

The original frame was painted blue and red in areas. Paint was mixed to simulate the original scheme. Blue was applied to the recessed areas behind the masks and between the 'dentils.' Deep red was painted onto the 'back edges' (sides) of the frame.

Back edge during painting

The surface was gently 'distressed' - some gold was gently removed from the surface to reveal the red bole below. The gilded surface was then toned down to reduce the sheen with the application of a pigmented layer.

The frame was adapted to create a 'microclimate' (sealed unit) to protect the panel painting from changes in temperature and humidity. An environmental monitor was set into the rebate of the frame to enable the internal environment within the frame to be monitored. The rebate was then foil lined, the painting fitted and the microclimate' sealed with silicone gel and foil tape. A specially made mount, shaped to match the warp of the panel, was placed in the rebate to support the painting.