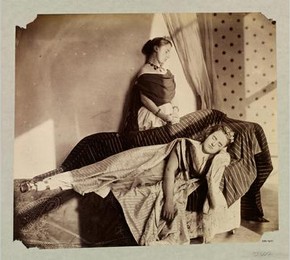 South Asian textiles were valued for a variety of reasons in 19th-century Britain. They were prized as symbolic trophies of Britain's empire in India and examples of its material resources, and were also admired as models of good design and inspiration for both manufacturers and consumers. They also became desirable 'exotic' commodities increasingly available in the bazaars and shops of London and other cities.

The first significant exposure of the Victorian public to South Asian textiles was at the international exhibitions where they came to form an increasingly dramatic part of the British sections, literally outshining examples of domestic manufacture which tended to be poorly displayed. Indian textiles could often be bought from the exhibitions or at auction afterwards. They were also imported commercially by a number of entrepreneurs. The most successful and influential of these was Arthur Lasenby Liberty, who founded the shop Liberty & Co. on London's Regent Street in 1875, and who learned his trade from a dealer in an important earlier fashion for Indian things - Kashmir shawls. The long-lasting fashion for shawls also resulted in machine-made imitations, made in Norwich, Paisley and Edinburgh, as well as in Paris and Vienna, putting them within reach of a wider public, but undermining producers in India. These shawls and their imitations were perhaps the most successful means of diffusing Indian design motifs, particularly the ubiquitous buta - known as flower, cluster of leaves, cone or 'paisley' pattern - which found its way persistently onto an extraordinary variety of printed and woven textiles, as it still does today.

South Asian textiles were given additional status by members of the British Royal Family who used and wore them both on state occasions and at less formal events. Among the wider public, artists and photographers were among the first to appreciate Indian fabrics before they became widely available; they were worn in artistic circles and often used as studio props. Artists also appreciated the draping qualities of Liberty's soft silks and cottons and Liberty acknowledged their patronage. Liberty himself encouraged a shift to soft, classically inspired, draping in dress, and a similar mood in furnishing, all suited to light Indian silks and muslins. Heavier weaves and embroideries were used for portières, or door curtains, and for framing orientally-inspired cosy corners.

Other retailers followed. Oriental fashions were also promoted by many home decorating advisers and by the new women's press; Liberty & Co. were frequently recommended as a source of materials. In 1886, the year of the Colonial and Indian Exhibition, Queen magazine reported that Indian fabrics were influencing fashionable dress and that printed Indian-looking cottons were being used for draping the walls of bed-rooms or boudoirs. It advised how a room could be improved at little expense using Liberty Indian fabrics and rugs; the effect was very different from the characteristically over-upholstered, heavily-curtained Victorian room. 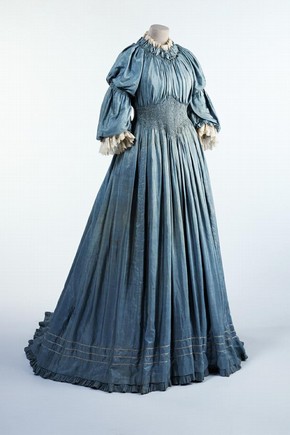 Admiration of South Asian textiles also encouraged a 19th-century imitation industry, rather as chintz had in the 18th century. Individuals made serious attempts to apply their admiration of the designs and techniques of Indian textiles in their own practice. Some of Owen Jones's designs for Warner & Sons were very close to Indian fabrics shown at the Great Exhibition and illustrated in the Grammar of Ornament. The dyer and printer Thomas Wardle (1831-1909) collaborated with William Morris in producing designs such as Indian Diaper and Indian Chintz. He also assisted Liberty in translating Indian designs for British markets, and used designs taken from wood-blocks in the India Museum at South Kensington for a range of silks produced for Liberty in 1881.

Wardle collected silks in India, produced many fabrics inspired by Indian designs and techniques, and devoted much effort to improving the quality of Indian silks. G.P. Baker, another important textile manufacturer, whose company was founded in 1884, made a large collection of non-European textiles including South Asian ones, which had a strong impact on the company's designs. Baker also gave serious scholarly attention to Indian chintzes and donated an important collection of more than sixty five Indian chintz textiles to the V&A in 1949.

The evidence of surviving textiles suggests that more generally, 19th century British manufacturers seemed to have regarded South Asian textiles as adding to a repository of useful designs in a competitive market. They also used them in direct imitation, as patterns for making goods for export to the subcontinent, although often in a different medium, using machine printing to achieve the effects of hand-block printing, tie-dye or embroidery. Throughout the 20th century and today, South Asian textiles have continued to inspire British textiles, fashion designers and high street retailers, and to appeal to fashionable consumers.