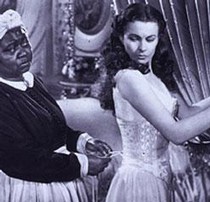 This image from the film 'Gone with the Wind` sums up many people's view of Victorian women -clutching to bedposts while their maid pulls and pulls at the corset strings to achieve the desirable and highly restrictive tiny waist. The woman battles against the restriction of her undergarments but to no avail. She is doomed to her position in society: a slave to fashion, cosseted and striving to be pleasing to men, whatever the cost.

Of course there is not fiction without fact. Women clearly did suffer for the sake of fashion, just as many do today with high heels and plastic surgery. Ridiculously large crinolines, protruding bustles and heavily boned corsets often did restrict movement and the range of activities women could engage in. But this is only one side of the story. Technological change in the late 19th and early 20th century led to new designs in underwear which often made life easier for women - as well as more complicated. At the same time new attitudes towards health and comfort and participation in sporting activities meant that women were actually becoming much more aware of their bodies and the harm that could be
done by restrictive underwear. 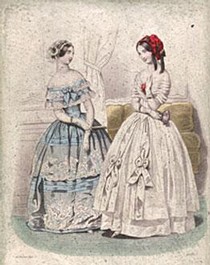 This article will trace the changes in body shape throughout the Victorian period which was facilitated by new attitudes and technology. From cage crinolines to bustles and body-hugging corsets, it will show how it was often the structures worn under clothes which gave Victorian fashion its form. The article will examine the devices invented to compress the waist, make the skirts look fuller, or to help the dress project out from behind. Much has already been written about the role of the corset and crinoline in Victorian society, largely focusing on the corset and its detrimental effects on the body. This article will therefore explore how these undergarments really effected the women who wore them, aiming to dispel popular rumours and open up questions. It will look mainly at fashionable dress as this is the focus of the Victoria and Albert Museum's collections.

In 1837 Victoria ascended to the throne. The fashion press looked to this new young queen to endorse new fashions and generally become an icon for her age. Contrary to popular belief Victoria was, until Prince Albert's death at least, interested in fashion. But she was not a frivolous royal leader and her belief in simplicity and demure elegance is echoed by the fashion plates of the day. Gone were the flamboyant fashions of the mid-1830s with the huge balloon-like sleeves, large bonnets and trailing ribbons. Dress of the late 1830s and 1840s was characterised by its drooping shoulders, long pointed angles and low pinched-in waist. These low-waisted dresses required long, heavily-boned corsets to give them their shape.

The corsets of the 1840s were cut from separate pieces stitched together to give roundness to the bust and shaping over the hips. A broad busk (a flat length of wood or steel) was inserted up the centre front of the corset to give a smooth line to the bodice of the dress. Strips of whalebone were also inserted up the back and sometimes down the side and front, to give more structure. Corsets also had to be rigid to conceal the layers of underwear, including chemise, drawers and petticoat, which were worn underneath. 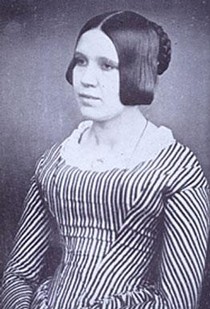 Contemporary photographs give some idea of how uncomfortable these long corsets must have been to wear. In this photograph, the woman's body is held in stiff, unnaturally tilted position by a narrow-waisted corset which emphasises the precise seaming of the bodice and low waist line.

The skirts of these dresses presented problems of their own. They increased in size and had to be supported by layers of heavy petticoats which were very hot and unhygienic - particularly in the summer. Bustle-like structures made of down-filled pads or whalebone and stiffened petticoats helped give added support. The most popular type of stiffened petticoat was made out of horsehair and linen which earned it the name crinoline ('crin' is the French for horsehair and 'lin' the linen thread it was woven with). This type of crinoline is not to be confused with the 1850s version made of steel hoops, which will be discussed later.

It is therefore not difficult to see where the archetypal image of the meek, servile Victorian woman comes from, with drooping waist and low stooped shoulders, staying at home, encased in her restrictive underwear and layers of heavy petticoats. It is however, important not to exaggerate. Photography, paintings and fashion plates are very posed and often picture people in their Sunday best. Although obviously corsets and heavy petticoats were worn, corset lacing was probably loosened and petticoats left off for more ordinary wear. 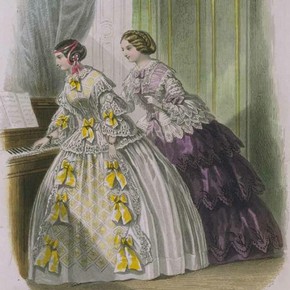 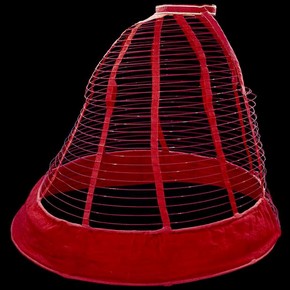 The development of the sewing machine in the early 1850s was one of the most important innovations of the 19th century as it led to the mass production of clothes including underwear. Although many corsets of the 1850s were still stitched by hand, the speed of sewing on a machine meant that manufacturers could produce corsets in far greater numbers and increase the variety of designs. Corsetry and underwear manufacture therefore became a major industry with a turnover of millions of pounds per year.During the 1850s, however, it was not so much the waist as the skirts that were the focus of attention. The skirts grew ever wider and wider, and the flounces and light materials they were made of meant that they needed more and more support. Layers of petticoats including the horsehair crinolines were no longer sufficient, and they were very heavy and uncomfortable. Something more structured was required. 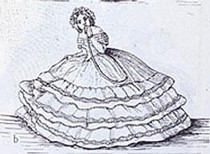 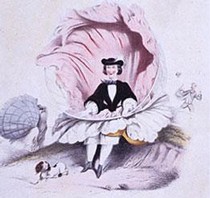 A patent was taken out in May 1856 for a garment inflated by means of bellows and deflated to enable the wearer to sit down. The satirical magazine Punch reported:

'Some idea may be formed of the labour which the present mode has rendered necessary, when we state that to fill the air-tubes of a single dress it takes the most expert lady's maid upwards of three hours and a quarter, even with the help of a good-sized pair of bellows.'

There were even derisive illustrations of ladies blowing into tubes to inflate their crinolines. We should, however, be wary of taking these reports and illustrations too seriously as many of the stories were exaggerated.

The artificial cage crinoline appeared in June 1856 as a welcome and more practical alternative. It was made of spring steel hoops, increasing in diameter towards the bottom, suspended on cotton tapes. This design was strong enough to support the skirts and create the desired bell-shaped effect. The fashion was so popular that Punch nicknamed the crinoline craze 'Crinolinemania'. 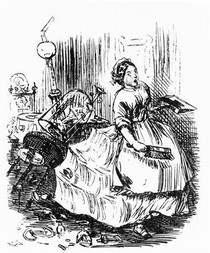 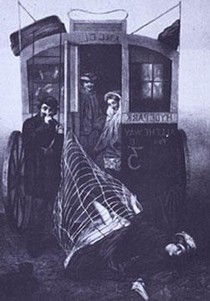 Much has been written and drawn to criticise and satirise the crinoline. The dangers and inconveniences of wearing the cage were much publicised at the time, and included being unable to fit into carriages or through narrow doorways. Some satirical images went so far as to pretend that women had to leave their crinolines outside or on top of the vehicle when travelling. Revealing more ankle and legs than was thought proper was another much cited problem. The above cartoon was aptly named A Windy Day and suggests that women sometimes showed even more underwear by being blown by a sudden gust of wind.

There were also many tales of accidents that could befall hapless wearers of crinolines, such as being caught in her hoops as she descended from a carriage or of causing havoc if she were a factory girl or servant as china, glass and other delicate materials could easily be swept off shelves and tables. In 1860 the textile firm Courtaulds instructed its workers 'to leave Hoop and Crinoline at Home'. The most frequent, and terrible, accidents were caused by sparks from open fires, a situation not helped by the wearing of highly flammable fabrics such as muslin and silks. Punch advised husbands to insure their wives at Fire Insurance offices and there were various suggestions for incombustible dresses. 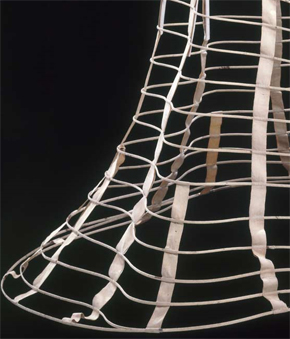 Many of these stories did have some foundation of truth. It is particularly easy to see how women could stray too near an open fire in their large, buoyant crinolines. But one should bear in mind that moralists, publicists and satirists were often out to condemn the fripperies of fashion and tended to focus on the most extreme situations. The story about ladies not being able to fit into carriages or through narrow doorways, for example, is clearly exaggerated. The cage crinolines might look very rigid but spring steel is in fact incredibly flexible and could be compressed. Accidents did happen but women would learn how to walk in crinolines and how to sit down so that they did not reveal all their underclothes.

The spring steel structures were also very light so rather than imprisoning women in cages (as some of the reports and images suggest) they had a liberating effect. They freed women from the layers and layers of heavy petticoats and were much more hygienic and comfortable. The Lady's Newspaper of 1863 extolled the virtues of a cage crinoline (probably very similar to the photograph above).

'So perfect are the wave-like bands that a lady may ascend a steep stair, lean against a table, throw herself into an armchair, pass to her stall at the opera, and occupy a further seat in a carriage, without inconveniencing herself or others, and provoking the rude remarks of observers thus modifying in an important degree, all those peculiarities tending to destroy the modesty of Englishwomen; and lastly, it allows the dress to fall in graceful folds.' 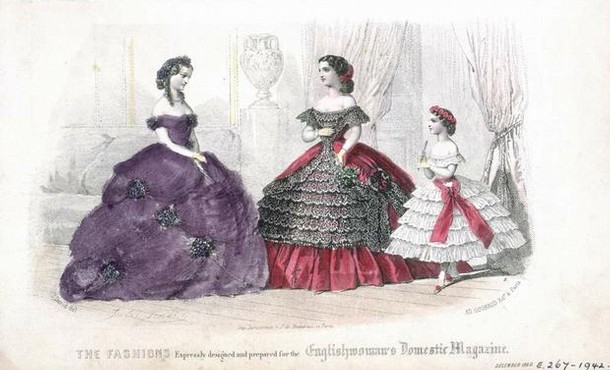 Contemporary photographs show that many women wore smaller versions of the crinoline, as opposed to the huge bell-shaped creations so often seen in fashion plates. Large crinolines were probably reserved for balls, weddings and other special occasions.

The crinoline craze reached its peak during the late 1850s and early 1860s. After about 1862 the silhouette of the crinoline changed and rather than being bell-shaped it was now flatter at the front and projected out more behind.

Lucy Johnstone is curator of fashion from 1800 to 1914 and wedding dress in the V&A's Department of Furniture, Textiles and Fashion. Her published work includes Nineteenth Century Fashion in Detail (2005) and Shoes (1999), which she co-authored with Linda Woolley. Recently she worked on an exhibition of wedding dresses, which opened at the V&A in 2007.